The only thing that surprised me about the Ukraine invasion is that other people were surprised.

Russia put 200,000 people on the Ukrainian border, along with thousands of vehicles and weapons of war. If you think about the sheer cost of executing such a maneuver, it must have run into the hundreds of millions of dollars. They weren’t going to turn around and go back. That, I was sure of.

Nothing else about the war has been obvious, but in hindsight, it’s not hard to see why Ukraine has been doing so well. Russian troops are underpaid, underfed, undertrained, and undersupplied. That’s one thing about being a war spectator—you get to see the military preparedness of your adversaries. Russia has the nth-best military in the world, and we are seeing it literally fall to pieces in the face of modest engagement. If the United States had an armed conflict with Russia, it would be over very, very quickly.

But if I told you that Russia would initiate force on Ukraine and threaten to use nuclear weapons on the rest of the world, and the stock market would be down… 5%... you probably would have punched me in the nose. And I think about this a lot—stocks plummeted 35% in the early days of COVID, and they’ve dropped about 12% in what may be the early days of World War III. Why?

Here is my best explanation: people had big imaginations when it came to COVID—though my friend Peter Atwater probably has a better term. We thought millions of Americans would die and the lockdown would last for years. That turned out not to be the case—we became accustomed to it relatively quickly. And besides, we pumped so much liquidity into the economy that the stock market quickly reversed course.

People did not have big imaginations when it came to the Ukraine invasion. Even though Putin was threatening nuclear war, nobody really took those threats seriously. Which is kind of insane, but that’s what happened. A land war in Europe has some implications for trade and commodities and international finance, and it has caused inflation and rising interest rates in the US, but the economic consequences have been otherwise limited. If you went limit short stocks ahead of the war, you are not too happy. If you bought put options ahead of the war, you have watched them melt. Of course, it is possible the war will spread to other places in Europe, particularly into NATO countries, so things can definitely get worse—but maybe they won’t.

A lot of people will tell you there’s a particular playbook you should follow when it comes to war. No—all wars are different. For the last 20 years, we have been waging war on-and-off in the Middle East, and those wars have usually resulted in a spike in oil prices and little else. One generalization that holds true is that wars tend to accompany inflation, and inflation tends to accompany wars… this war in particular. Just look at this chart of wheat to see what is happening in Ukraine. 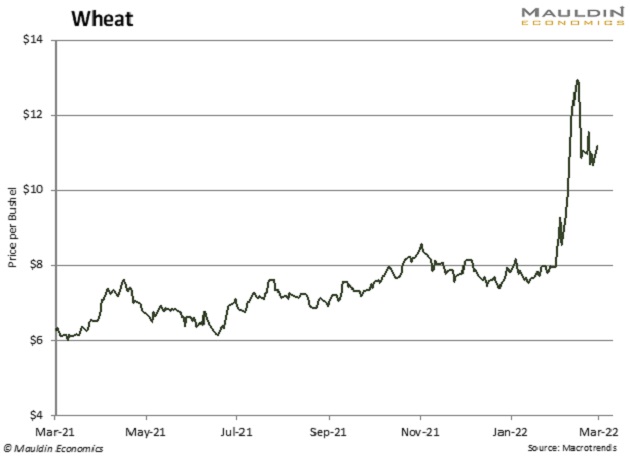 Ukraine exports a number of commodities, particularly agricultural commodities—and they can’t go out and plant with bombs dropping on their heads. Inflation was bad before, and now it will get worse.

As for stocks, I’ve seen a number of arguments that stocks rise in wartime, but again, I don’t think you can generalize. People are getting used to the war in Ukraine. Now that it’s reached a stalemate, and Russia has effectively been neutralized, stocks have rallied a bit. But if Russia uses tactical nuclear weapons on Kyiv to take out Ukraine’s leadership, I’d guess that stocks would drop 5–8% overnight. Buying stocks here is an implicit bet on things not getting any worse. But as we know, things can always get worse.

When it comes to this stuff, I am as lost as you are. I can predict some things with confidence—it was easy to predict that inflation would rise in 2020. I do not know how the war in Ukraine is going to turn out. If you want to know the answer to that, talk to the Ukraine analyst at the Defense Intelligence Agency. He or she suddenly has a lot more to think about. My guess is that the intelligence community has a pretty good idea of what is going to happen—right down to Putin’s actions. They’d tell us, but then they’d have to reveal sources and methods. What I would give to be part of those intelligence briefings.

The one thing I am not lost about, though, is how to trade through this unfortunate situation… how to insulate your portfolio from the devastating effects of a distant war with worldwide financial consequences. Things are moving fast. That’s why I’ve put together The Wartime Portfolio, an urgent special report with seven actionable trades to shield your portfolio from the ripple effects of war. Click here for more.