People got interested in bitcoin all of a sudden over the weekend. 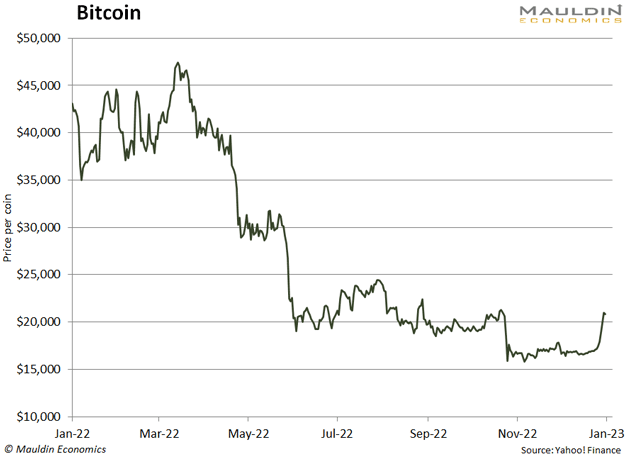 This isn’t an accident. Many people have commented about how speculation is returning, how the “garbage” stocks are rallying, and it was only a matter of time before crypto participated.

Is this just another bear market rally that’s going to peter out at some point?

Is this the beginning of a new bull market?

In my opinion, it’s the latter.

The difference is that while the garbage stocks are rallying, you’re still getting an impulsive move in value stocks, too. And this is something I’ve been commenting on for a while—with every new bull market comes a change in leadership. I talked about the parallels to 2003. We’ve had a distinct change of leadership in the stock market, as evidenced by the 16% (!) outperformance of the Dow over the Nasdaq in December. It doesn’t get any starker than that.

This is a long way of saying that it is safe to get back in the pool. We’ll know for sure if the S&P 500 breaks the long downtrend that began early last year. There’s some technical congestion around this area, with a bunch of trendlines and moving averages, but once you break through 4,100, there’s clear sailing to new highs. (I’m not saying we will have new highs, but you can’t rule it out.)

Of course, at that point in time, it was too scary to invest. So, the 20% you missed out on is the tax you pay for being a chicken. This is a fact that has been lost on market participants for as long as I can remember. The technical analysts will tell you when it’s safe to go back in the pool, but you should really get in the pool when it is still dangerous to get in the pool. As such, I have many disagreements with the discipline of technical analysis.

I tweeted something two weeks ago that generated some discussion: 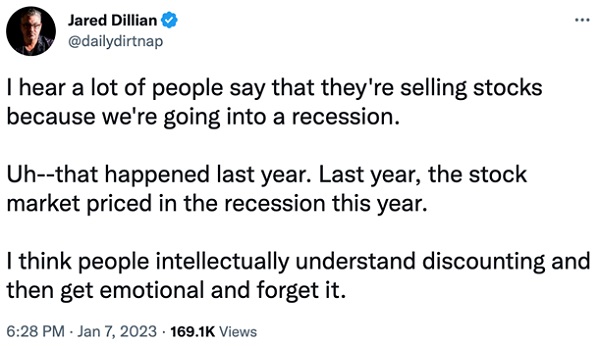 It bears repeating: The bear market we had last year was because of the recession we’ll have this year. The bull market we’ll experience this year will be discounting the expansion we’ll have the following year. Another thing I’ll mention is that every downturn doesn’t have to be like 2008. Stocks can go down 20%—and stop. It happens all the time. The stock market went down 57% in 2008 because we thought the entire financial system would collapse. That’s a lot worse than what we’re experiencing right now, which is basically a plain-vanilla rate-hike cycle.

No need to get out the canned peaches and the MREs.

How do you play this? There are dumb ways, or you could get a little more scientific.

The dumbest way (but still a good way) is to just buy the Dow Jones Industrial Average in the form of the DIA ETF.

A better way would be to buy the iShares S&P Small-Cap 600 Value ETF (IJS): 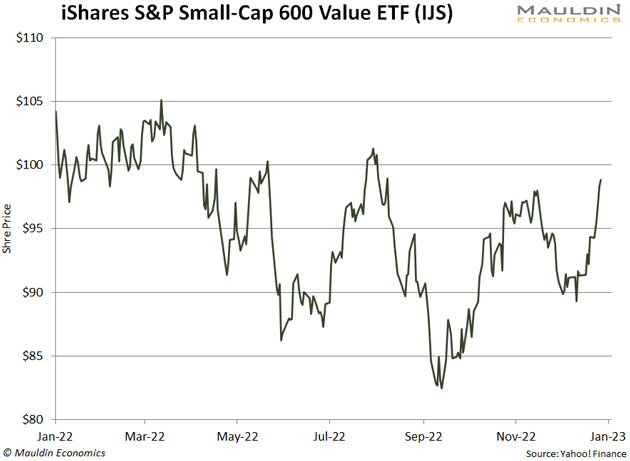 And a smarter way still would be to pick individual stocks that you believe are going to outperform the index. That’s what we try to do in Street Freak, which outperformed the S&P 500 by 23.4% in 2022—maybe you should give it a try.

We’re Getting to the Fun Part

Investing isn’t always fun, but sometimes it is. I think we’re getting to the fun part. Having said that, a lot of the charts are overbought, and as I mentioned before, we are running into some technical congestion, so there could be some backing and filling in this zone, but it will resolve to the upside soon.

I like to say that the stock market always does what surprises people the most. What would surprise people the most? The market getting back near all-time highs. You can picture it now: a thousand bears discredited on Twitter. A lot of tweet-deleting. No mea culpas. Hoping you forgot about all those doomsday predictions.

I’m acquiring a reputation as a bull, but longtime readers of The 10th Man will know that’s not the case. As for valuation, well, I wouldn’t pay a great deal of attention to that. We’re not getting back to 1982 valuations, for reasons even I do not fully understand.

I can tell you one thing—if we get another bout of inflation and CPI goes over 10%, we might get near 1982 valuations, but nobody wants to see that happen.

But in the short-term, “Party on, Wayne.”