I’ve been tweeting incessantly about gold like a five-year-old. I decided I’m going to do what Anthony Pompliano did with bitcoin on the way up, except with gold. Maybe it will get me 1.5 million followers, too. If you have a hobby horse, your job is to ride it. 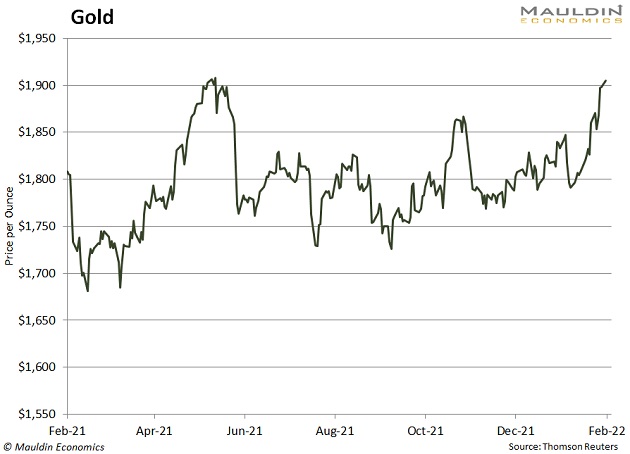 Gold recently broke out of a two-plus year consolidation pattern, and it’s rocketing higher. I noticed the change in price action about a month ago—it was acting more like a tennis ball than a lead sinker.

Keep in mind gold investors have endured loads of economic hardship, watching helplessly while gold languished and crypto went to the moon. The entire narrative of gold as an inflation hedge broke apart. If it doesn’t go up during a national disaster, and it doesn’t go up during inflation, what’s the use? By the time gold began rallying, nearly everyone had given up on it.

But not me. I’ve been waiting patiently for years. If there is one quality I have as a trader, it is patience. I was ready to die before I gave up on gold. Gold has only returned 4% annually for the last 100 years, but it has returned 7.9% annually since 1971. And for brief periods of time, if you hop on that train, the returns can be astounding. This is one of those times.

I have held gold in various forms since 2005, when the SPDR Gold Trust (GLD) first launched. I noticed some worrying trends at the time, and I figured it would be a good idea to initiate a position. I’ve been adding to it in dribs and drabs over the last 17 years. But now, with war imminent, inflation roofing, and debt out-of-control, it seems like a good time to make the position larger. And I have.

Although inflation, debt, and war are not driving the price of gold. What’s driving gold is simply the chart. Gold trades more technically than any other asset. Commodities in general trade very technically, and I tend to succeed with commodities more than stocks, which trade in a much more efficient market.

The one thing you need to understand about gold is that 99% of the flows are speculative—price discovery takes place in the futures market, where an entire year’s worth of mine production can trade in one day. GLD and gold equities are also large, but nothing compared to the futures market. And the big players in the futures market can push the price around significantly. For years, they pushed it lower. Now, they are being forced to cover and push it higher.

The thing about markets is you don’t learn the reason for a move until much later. Gold has rallied about $100 in a month, and nobody is really sure why except for the war looming in Ukraine. My guess is we won’t know the reason for the breakout until many months from now, when it is well over $2,000. Then it will all seem obvious in hindsight. But remember, you want to buy the rumor and sell the news—not buy the news. By then, it is too late. This means watching the charts and trading the technicals. Price matters more than anything.

There are divergent opinions. Brent Donnelly of Spectra Markets recently started a Substack where he initiated his first trade idea: short gold in euro terms. He’s likely to get stopped out imminently. But he has very nuanced views on gold. Donnelly writes:

Most financial assets (like many stocks and bonds) generate cash flows and thus have an automatic built-in head start over gold because it’s a negative carry. You pay to own it. 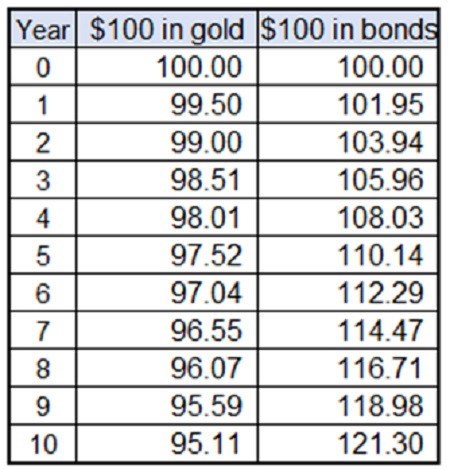 What he’s referring to here is that gold is a negative carry because you have to pay to store it. Yes, there are storage costs associated with gold, and crucially, it doesn’t pay any coupons or dividends. He goes on to write:

The power of positive and negative compounding means that any investment that produces cash flows will always start with a huge advantage over one that does not. That said, when gold rallied from $400 to $1,800 from 2002 to 2011, nobody was worried about the negative carry!

I also spoke with Tommy Thornton, founder of Hedge Fund Telemetry, who also shared bearish views on gold. Tommy is a pure technician, so he sees things in the charts that I don’t. But he did acknowledge the bull case and noted that gold sentiment was creeping above 50%, which is a very bullish sign. 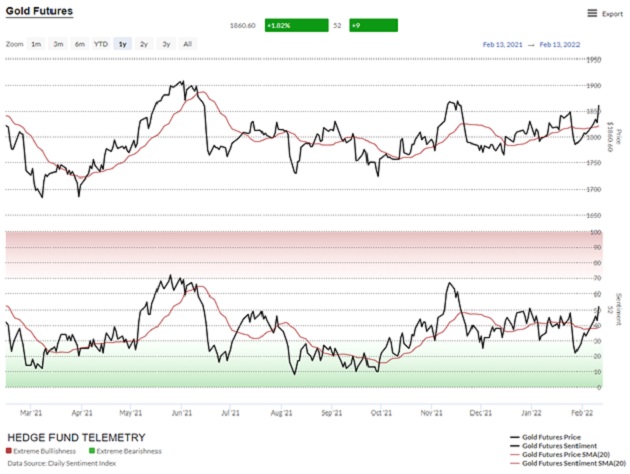 Finally, I spoke with a precious metals dealer at the retail level—Dana Samuelson of American Gold Exchange—who offered a bullish outlook:

Just as Covid has begun to subside, inflation has been rising, which has kept physical demand for precious metals very strong over the last six months.

This is true—physical demand for retail-sized coins and bars has been humming since the pandemic started. The premiums above spot have been expanding for two years. But Dana says things have slowed down a little:

I like to see this divergence of opinion—it is fuel for higher prices. If everyone I interviewed was unanimously bullish, I would pull the ripcord. It may seem hard to believe today, but I think this bull market will continue until one day in the future, perhaps this year or next, it turns into a bubble similar to the one we experienced in 2011. It’s going to be huge. I’m a buy with guy, and I buy with.