You can’t not be in this trade. 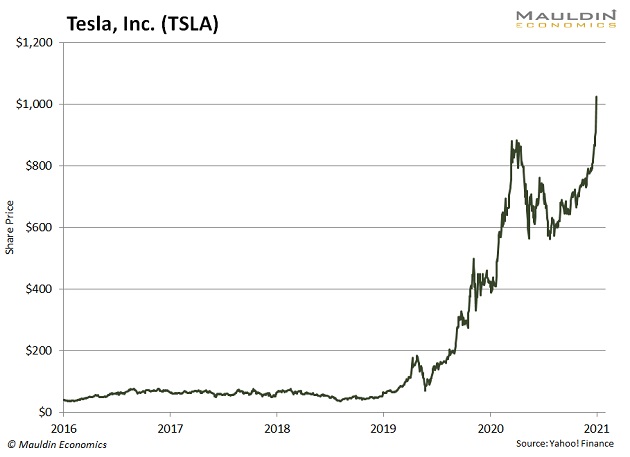 A brief history. I have traded Tesla three times. I bought it in 2013—did pretty well and sold it after about six months. I shorted it in 2019, and covered right before the explosion, basically breaking even. And then I bought puts earlier this year, caught the mini-collapse, and picked up my bag of money at the next window.

I would have been a lot better off if I had just held onto it in 2013.

I am fond of saying that there is always another trade. You screw something up, no big deal. Just move on to the next trade. It’s a big stock market, and there is always something else out there. But a Tesla doesn’t come around very often.

So why is Tesla doing what it’s doing? One reason and one reason only—you do not want to bet against Elon Musk. I don’t have any personal connection to Elon Musk, but I know a guy who used to work for someone who used to work for him—at SpaceX. He said that after about two years of working at SpaceX, Elon wore him out. The guy is a genius, but there are lots of geniuses who don’t go on to do anything in particular. I don’t get the impression that he’s an incredibly nice guy. But he demands excellence and drives people to their breaking points. And he thrives on chaos.

If you think about what an incredible achievement this is—building a car company from the bottom up, a solar company (which more or less failed, but that’s okay), and a spaceship company—it just boggles the mind. And he is making his employees fabulously wealthy.

Some people have speculated that Elon Musk might be the world’s first trillionaire. That is probably going to happen. But not off of Tesla. He will become a trillionaire off of SpaceX, which is currently valued at $100 billion. The space “industry” is still not getting a lot of attention. After the first crewed private space launch, it doesn’t even show up on TV anymore—and it is filled with entertaining oddballs. But I would bet that in 20 years, space will be our most valuable and profitable industry.

First, a thought experiment. SpaceX is worth $100 billion as a private company. How much would it be worth if it IPO’d tomorrow? $500 billion at least—probably more. And you know what would happen next. It would trade at 1,000 times revenues, and all the analysts would hate it and say it was overpriced. Then it would double and double again.

I’m not as smart as some people, but I do have the benefit of 22 years of mistakes. When SpaceX goes public—who knows when—we will get another bite of the apple. And you will want to buy it at any price.

Of course, the idea of someone being worth a trillion dollars is… weird? I saw earlier this week that Elon Musk is now personally worth more than ExxonMobil (XOM). Cue all the discussions about taxing unrealized gains, which Elon (and others) have infinite resources to fight.

I’m a macro guy. I trade currencies and commodities and equities and fixed income. And I do pretty well. This year has been a little underwhelming. I am not a growth investor. The stuff that Cathie Wood does, I just do not understand. Sometimes it seems like she is throwing a bunch of spaghetti against the wall, buying every growth and innovation company in sight. I do not see the process.

And there are long stretches of time in investing history when growth underperforms—or even gets killed. You probably saw my recent piece about horizon preference.

It is one thing to have portfolio management skills—to build a diversified portfolio that maximizes return per unit risk. But it is another thing altogether to be able to think futuristically—to identify an exponential technology, and then find a management team with operational and marketing skills to bring it to fruition. This is what the people in Silicon Valley do, though sometimes they do a bad job of it. Peter Thiel does a great job of it.

I would trade my portfolio management skills for futuristic skills in a heartbeat. I would. Part of it is because I cannot stand the sight of my neighbor getting rich. I heard about bitcoin in 2013. I didn’t buy it until 2019. What the hell is wrong with me? What is it about my twisted psychology that I don’t take emerging technologies seriously?

I’m an analog Gen Xer living in a digital world. I was 20 when I discovered email. I was 40 when I discovered smartphones. I didn’t start depositing checks on a mobile app until this year. As one of my former subscribers charitably put it, I am the caboose.

Don’t take any growth stock picks from me. And if I give you one, I probably got the idea from someone else.