We recently got the news that tech/intelligence firm Palantir (PLTR) bought $50 million worth of physical gold to hold on its balance sheet. They’re not telling us where they put the gold, which is understandable.

Palantir bought the gold in case of a “black swan.” We don’t know what that might be, but we have some guesses. It might be a big freaking war, for starters, the chances of which ticked up a bit after the Afghanistan debacle. Or a currency collapse. Or who knows what. We seem to have big black swans every few years, so it’s probably not a bad idea to keep some gold around.

We had a black swan last year with the pandemic—and gold went down, at least, initially. Mostly because people were selling all assets to raise cash. That actually happened in the early part of the financial crisis as well—gold peaked at $1,000 an ounce on the Bear Stearns take-under. Then it sold off 30% headed into the fall. It didn’t make any sense.

Gold never makes any sense, but it’s outperformed stocks since 2002. 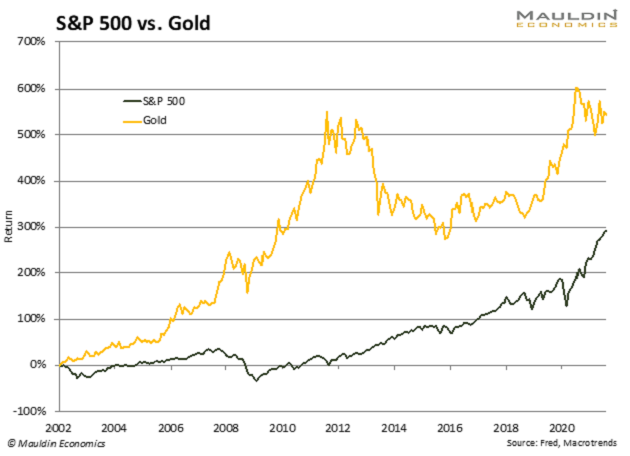 In a sense, this isn’t much different than MicroStrategy (MSTR) or Square, Inc. (SQ) or even Tesla (TSLA) buying bitcoin. Although the motivations are different. Palantir bought gold as an insurance policy of sorts. MicroStrategy and Tesla are engaging in rank speculation. You could make the argument that Square is holding it to facilitate payments someday. But nobody holds bitcoin because they think the world is going to end, because if that happens, as a risk asset, bitcoin will probably go down. Bitcoin also wouldn’t do so well with the power off.

So, is gold insurance or speculation?

Depends on who you ask.

How High Could Gold Go?

A reasonable question. One thing I’ve been talking about incessantly in The Daily Dirtnap is the search for 10X inflation trades. After all, if inflation really is a big 10–30 year super-cycle trend, wouldn’t it be nice to retire off it?

So, is gold a 10X trade? Maybe. The Fed does have a bunch of gold on its balance sheet. Thousands of tons of it. It hasn’t added to or subtracted from these holdings in decades. Meanwhile, we have more dollars in circulation. So, each dollar is worth less in gold terms. Easy enough to understand.

Not like we would ever go back to a gold standard, but it’s an interesting thought experiment.

But there are other scenarios which are not so good for gold.

Anyway, the question was: How high could gold go? Is it a 10X inflation trade? It might be. That is kind of hard to believe right now, since the price action has been so craptacular, and everyone is bearish on it. But you have to have a pretty big imagination in this business.

As for Palantir, I’m not sure if they’re buying gold for potential hyperinflation or not, and they’re wise enough not to wade into the politics. That might be what they mean by a “black swan.” And they’re nowhere near turning themselves into a gold trust, like MicroStrategy did with bitcoin.

I don’t foresee other corporations doing this. It’s too weird, and it’s impractical. But I love things that are weird and impractical.

Of course, I also love things that are practical—things my subscribers can act on today to profit from inflation, like the recommendations in my latest special report. Learn more here.