Somewhere in the last 30-40 years, we have become economically illiterate.

Elizabeth Warren wants wealth taxes that will impose asset forfeitures of 2-3% on households with more than $50 million in assets. There are practical and legal problems with the implementation of these “taxes,” but she wants to implement them anyway.

Alexandria Ocasio-Cortez wants a 70% income tax rate on incomes over $10 million. People sympathetic to the idea point out that this affects only 16,000 households and that it only returns marginal rates to historical levels, anyway. This would give the US the highest income tax rates in the OECD.

Stephanie Kelton, an economist at Stony Brook University, wants to implement something called Modern Monetary Theory. MMT is where the central bank prints money and pays government expenses, freeing the government from reliance on fiscal policy that is constrained, well, by the amount of money it can collect.

This is some crazy stuff. Crazier than a road lizard. Let’s deconstruct it, since the major financial media outlets are not really allowing the other side of the story to be heard.

The key points here are TRADE-OFFS and INCENTIVES.

The weird thing about economics is that some people think we get to have it both ways, because… we are special? 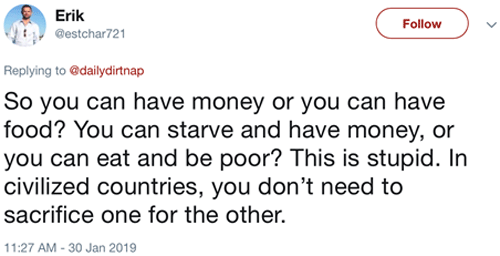 Actually, if you want to buy food, you have to give them your money. Then you will have food, but no money. Or, if you would rather have money, you can keep your money, but then you won’t get food. Trade-offs.

This is where people go crazy. Economics isn’t physics, but in a lot of ways, it is. There are physical laws that you must simply obey. You can have money, or you can have food.

It says that you can have money, food, aircraft carriers, social security payments, maybe even basic income. There are no constraints! You can have whatever you want.

In this particular case, a third-grader could identify the trade-off. If you printed money to buy food, aircraft carriers, entitlement payments, and basic income, you would probably end up with inflation.

More money chasing around a finite quantity of goods results in inflation. This is common sense.

The really, really smart people in economics—I mean the smartest, brightest stars—come up with ideas that defy common sense. If you question them, most say you are just too dumb to understand their research.

You simply can’t have everything you want. You have to make choices. Even the richest country in the world has to make choices. If you want to give everyone 3 squares and a basic income, there are choices involved with that, too. There are trade-offs.

Now, to the tax stuff. I’ve found that economically left people completely fail to understand that human beings respond to incentives in ways that are fairly easy to predict.

If you tax income at 70% (or higher), then you create a strong incentive not to earn $10 million. People will earn less, find out how to get compensated in creative ways, or defer compensation into the future. Confiscatory taxes never raise any money. People just get clever, or they go somewhere else. Throughout the history of the income tax, high and low, it always collects roughly the same percentage of GDP.

As for the wealth tax, it’s not really a tax. It’s an asset forfeiture, the kind we claim to dislike so much when the police do it. Asset seizures are not in the Constitution, so you would have to pass a constitutional amendment (just like you did with the income tax back 100 years ago), which is highly unlikely in today’s environment.

The practical problems with wealth taxes are astounding. Take Jeff Bezos, who, pre-divorce, was worth around $140 billion. Tax that at 3 percent, and you take $4.2 billion—which is a lot more than he has liquid lying around. He’d have to sell stock to raise money to pay the tax. Multiply that by 3,000 other CEOs, and you see the magnitude of the problem.

Of course, it’s a lot harder for privately-held businesses. Imagine the administrative nightmare with hiring an army of IRS workers to obtain appraisals of hard-to-value assets and charge tax (which people are not liquid enough to pay). Most people’s wealth is tied up in illiquid stuff, so they will probably just get fed up and leave.

All of this is simple to understand. If you don’t like rich people for whatever reason, and you’d like to see them leave, well, then great. We will see how things turn out.

Here is the one scary thing: I don’t think we’ve hit the top of economic stupidity yet! We are going into the 2020 elections, and we are going to reach Brobdingnagian levels of stupidity—on both sides.

If you spent your life worrying about this kind of stuff, you would not be a happy person. Don’t dwell on it. The only advice I can give is:

As readers of The Daily Dirtnap know, I spend pretty much all my time trying to figure out how to make money off other people’s stupidity, a strategy that seems to be coming back in favor.

I’m cursing the guy who once said “May you live in interesting times.”

Interesting Times at SIC in Dallas

I’m putting together my own session, complete with speakers I want to hear from. I’ll tell you more about that soon, but suffice it to say I’m super excited about it.

There is too much amazing stuff happening at the SIC to list here, but I want to point out that the debt panel has a lineup that guarantees fireworks. It includes both Howard Marks, co-Chairman of Oaktree Capital and Carmen Reinhart, Professor of the International Financial System at Harvard Kennedy. In other words, a famous debt investor and a famous academic on debt cycles—pull up a chair!

It’s going to be great, and I hope you can join me there. February 18 is the cutoff point if you want to take advantage of priority pricing, so there isn’t much time to lose.