My mom was a big Neil Diamond fan. So when I was about eight, it was the first concert I ever went to (correction: got dragged to). Went to several more. Came to really appreciate Neil Diamond over time. Actually saw Super Diamond (a really great Neil Diamond cover band) in New York—twice.

I also saw The Jazz Singer, which is a comically awful motion picture. Neil Diamond later admitted that he wasn’t much of an actor. 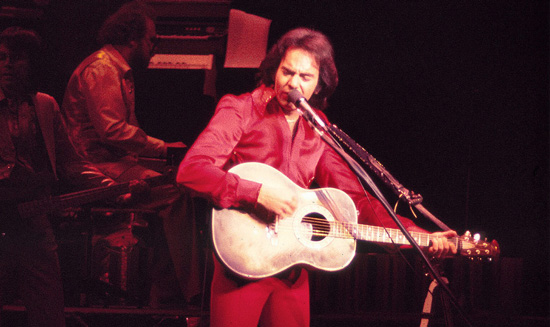 By Jessie Eastland, via Wikimedia Commons

But at the end of the movie is a truly great and inspired performance of Neil’s song America, which is unironically patriotic—and also about immigration.

Can you imagine if this came out today?

This is why I love studying culture so much, and I think it’s integral to studying markets. A song like this could only be performed at the cusp of 30 years of positive attitudes towards the free movement of goods and people.

And like I said, it’s genuinely patriotic—but in a different way than the displays you get at professional sporting events these days.

And guess what? The dollar was strong.

What are the benefits of a strong dollar? There would seem to be none. Oh, there are benefits—but they are a bit harder to see. When you have a strong currency, it is very difficult to export things. So your exporters and your manufacturers have to be very disciplined, to keep costs as low as possible so they can be competitive overseas. It takes all the slack out of your economy. It makes your economy a lean, mean fighting machine.

What if foreign competitors are subsidized? Too bad.

What if foreign competitors are dumping? Too bad.

What if foreign countries are keeping their currencies artificially weak? Too bad.

Actually, throughout the ‘90s, it wasn’t just the US that wanted a strong currency. Most of the developed world did. If you recall, Europe wasn’t happy with the face plant the euro did right out of the gates. It was a point of pride.

Also, you probably recall that interest rates were not zero. They were much higher. Just 15 years ago, fed funds were 6.5%. They were 6.5% during the height of the dot-com bubble, which is a powerful incentive to be in cash.

Hindsight being what it is, that would have been awesome. But interest rates were high across the globe, and sure, savers benefit when rates are high, but the bigger point is that when interest rates are high, corporate America is disciplined, because if lots of money is going out the door for debt service, you have to economize on other stuff.

We had strong currencies and high interest rates. It was economic nirvana.

And people wonder why things are so bad today.

Unbelievably, throughout all of this, throughout all the negative interest rates and money printing and currency devaluation, the United States is still the best destination for capital in the world.

And it is about to get better.

We got a taste of that at Jackson Hole, where Yellen said that “the case had strengthened” for a rate hike, and then Fischer doubled down on it.

I have been saying for quite a while that monetary policy is probably going to be a lot tighter once we get the election out of the way. I think it’s not super likely that the Fed will hike in September, right before the election, but if we get a strong payroll number tomorrow, it’s in play.

This is not priced into the currency markets yet.

I have a hunch that 2017 is going to be a pretty good year for USD, and it might be a great year for USD, if all these housing bubbles around the world pop simultaneously, and you have Canada, Australia, Sweden, Norway, and others all cutting rates. And I don’t see Europe and Japan tightening anytime soon.

I’d say that 60–70% of all currency movements can be explained by interest rate differentials. If the Fed is hiking and everyone else is cutting, the dollar will get stronger. No doubt about it.

Jack Lew certainly has no interest in pursuing a strong dollar policy (and if Lael Brainard becomes Treasury Secretary under a possible President Hillary Clinton, that isn’t going to change), but I think it’s important to point out that Treasury hasn’t commented on FX movements much in recent years.

There was that spasm a few years ago when China was accused of being a “currency manipulator,” but outside of that, the US government hasn’t really talked down the dollar at all. Not even during that big rip last year. And I don’t think they will. I think the dollar could run quite a bit further before anyone did anything about it.

Street Freak subscribers got a sneak peek of this a few weeks ago, along with tips on how to avoid losses related to dollar strength. Give it a shot.

The unfortunate thing about Neil Diamond is that Red Sox fans have misappropriated his material and ruined one of his greatest songs. So bad, so bad, so bad.