People are a little nuts about vaccines and the virus. This has been true for a while, but it is still true.

Anytime I mention vaccines in The Daily Dirtnap, my inbox fills up with hate mail, and I am not some anti-science ogre. I was one of the first people to get the jab last February. But people are touchy about this stuff. Y’all need to relax.

Anyway, you cannot talk about the stock market without talking about vaccines and the virus. The value/inflation/re-opening trade remains a never-ending ass-ache. I am even hearing chatter about new lockdowns on Twitter.

A thought experiment: if that happened, what would the stock market do?

Well, in the first iteration of the coronavirus, the Fed poured liquidity into the economy, and the government handed out free cash, which resulted in stocks climbing 100% from the lows last March.

If you continue that train of thought a little bit, you might conclude that the virus is not bad for business. In the short term it is, but in the long term, it’s not. Extreme fiscal and monetary policy measures tend to be good for stocks, not bad.

So here is my thesis, which we will discuss in a little more detail. Once we get past the delta variant, whatever that looks like, it will result in a stock market boom perhaps half as large as the one we had last year.

That might seem unlikely right now, as the indices are treading water. But if you look at a short-term chart of the SPX, it looks like a chart that is waiting to explode higher. 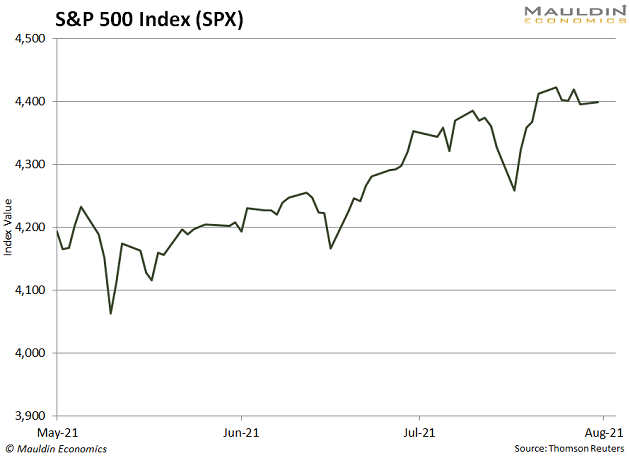 Remember last year, when, if you didn’t own the big tech companies, you were massively underperforming the index? That is about to change. I am uncertain of the timing.

Let’s Think Through This

These were the last few bear markets in stocks:

I am leaving out the LTCM crisis of 1998, which, basically, only lasted a day.

Now, the conventional wisdom around bear markets is that we cannot conceive of what would cause a bear market in advance. It is a black swan.

The only true black swans on our list—2020 and 1987—resulted in very brief, short-lasting bear markets. The other stuff, like the financial crisis, well, we could see that coming a mile off.

Now that I’m not doing the radio show and I have more time, I sit around and think of what might trigger the next bear market. I am not coming up with anything! And I’ve never been accused of lacking imagination.

Meanwhile, the Fed and the government are dumping cash into the economy, and everyone has so much money there is no place to put it.

So, I have a tough time believing people who say this is somehow going to result in… deflation. I am not an economist, and this does not constitute economic analysis. I’m just the dumb newsletter writer. The simplest ideas are always the best.

If future variants of the virus cause more cash to be dumped into the economy, I have a tough time seeing the stock market going down.

What will cause the next bear market? Probably a withdrawal of liquidity when the Fed tightens monetary policy. It will make the taper tantrum of 2013 look like child’s play.

Ten years from now, when you’re making a list of big bear markets, and you look at the causes, this will be fairly obvious.

If the Fed hikes rates and the government tries to reduce the deficit, we are in for one hell of a crash.

But that’s nowhere on the horizon. This is how markets work: it will matter when it matters, and not a moment sooner. There is no use thinking about it now.

In the meantime, I think the stock market could rally 30% over the next 12 months. That might be a little ambitious, but not by much.

The Fed has a million reasons not to tighten monetary policy. Two big ones are unemployment and the virus. The Fed only has one reason to tighten: inflation. And the Fed is just doing what it said it would do—making sure that inflation averages two percent over time.

I’m going back to the Coast Guard Academy for homecoming in the fall. I don’t have a lot of positive memories of my time there, but I can thank the military for instilling in me a profound sense of cynicism. It continues to serve me well to this day.

Please check out my latest mix Blue on Soundcloud. It’s great for the car, with the windows rolled up, turned all the way up, until the tinnitus sets in.