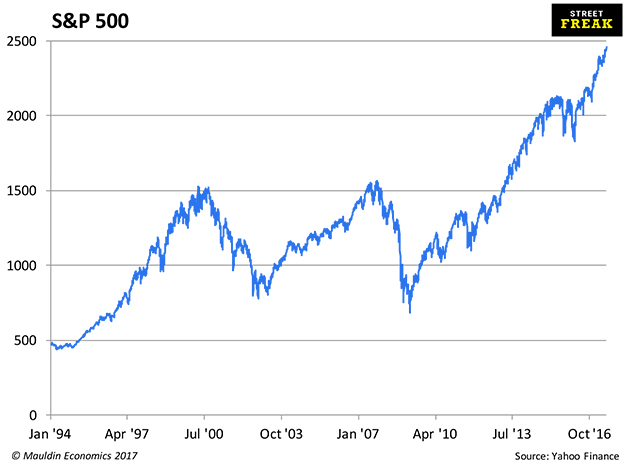 I did not coin the term “the everything bubble.” I do not know who did. Apologies (and much respect) to the person I stole it from.

Why do we call it the everything bubble? Well, there is a bubble in a bunch of asset classes simultaneously, like:

For the last few, I am just screwing around… though they are also bubbles.

I don’t like going around and calling things bubbles. It’s a good way to lose credibility (especially if you started in 2013).

I haven’t been exactly bullish over the last year. But I have refrained from calling it stupid, because it could always get stupider.

But now, I’m not sure how much more stupid things will get.

I think what pushed me over the edge was bitcoin.

First, let’s define what a bubble is. A bubble is not simply a matter of overvaluation. It has to be accompanied by an obsession or preoccupation with an asset class.

When you see people making haystacks of cash all out of proportion to their intelligence or work ethic?

That is kind of what is happening right now in cryptocurrencies.

Am I some kind of Luddite? No.

Do I see the potential of blockchain? Yes.

But when I see people behaving this way—literally throwing money at each other—you’re probably closer to the end than the beginning.

People are comparing bitcoin to tulip bulbs. I think those comparisons are apt. But at least with tulips, you had something tangible—a plant.

Someone asked me last week how I thought bitcoin and the others would perform in a bear market. Would they go up, like gold?

I think the opposite would happen. Regardless of bitcoin’s supposedly safe-haven status, right now it’s acting like a risk asset—a risk asset with a lot more beta.

It is all connected.

Basically, in the age of peak indexing, the only thing left is systematic risk.

Wax On, Wax Off

A market that is just systematic (non-diversifiable) risk is impossible to trade. You can be risk-on (long stocks), or risk-off (short stocks), but there are virtually no benefits to diversification.

Look at S&P 500 index funds. In the old days, you would say you were diversified if you owned one—you owned 500 stocks!

Does anybody really think that they are diversified by owning an index fund today?

No. You own the same 500 stocks that everyone else owns. Again, there is nothing left but systematic risk.

And this is borne out by experience—professional stock-pickers are getting schooled. You are either long FANG, or you aren’t. This has compelled a lot of people to say that active managers are stupid.

But do you think it’s more likely that:

a) a bunch of smart people became stupid, or

b) that the environment suddenly changed?

If you’re one of those smart people, do you completely abandon your process and just buy FANG?

Or do you stick with what has worked your entire career in the likelihood that it will one day work again?

This time is (probably) not different.

A lot of bears get sweaty palms about the possibility of a bear market. Hey, you can’t have capitalism without downturns. You have to purge the speculative excesses. The longer you go without a purge, the bigger it is going to be.

As much as I think a bear market would be fun to trade, I do not wish it on anyone. Most people are no good at trading a bear market.

I have been through this a couple of times. Even when I think I am perfectly positioned for it, I still seem to find a way to lose money.

Also, nowadays, we have no idea what kind of malignant political forces will be unleashed if we have a real, hard-landing recession…

Does it all get pinned on Trump? Probably.

Does it push the left further left? Probably.

Does it increase the chance of real instability in 2020? Yup.

And people underestimate the ferocity of bear markets, because they can’t see second and third-order effects. The stock market doesn’t go down 20% in a vacuum. We have no idea what is going to happen when stocks go down 20%. Nothing good, I imagine.

So you should not be wishing for a bear market. You should be wishing that this goes on forever.

I have been making bearish noises for a while, but I haven’t been willing to stake my reputation on it.

I am now willing to stake my reputation on it.

I think we’re very close to a downturn. I will be surprised if this doesn’t come to pass within 6-12 months. If it doesn’t, I suppose you can call me out, if you like doing that sort of thing.

One more comment: it will probably be the fastest downturn in history, owing to the degree of leverage and speculation. Proper preparation prevents poor performance.

We are in the Everything Bubble. We’re so deep into it, that most people can’t recognize it for what it is—like fish not recognizing the water they live in.

Although ... some people do see the grinding contradiction between the manic asset markets and the ensuing and growing wealth inequality, and slow and slowing economic growth.

I’m not sure, but I think Mike Larson, of Weiss Research, coined “everything bubble” to describe what’s been going on since late 2012.

This market has been bubbling along for far longer than most people have thought it could. How many bets on a crash have been placed over the last 5 years? Way too many. Anyone who thinks we are just 6-12 months from the end is probably going to come up short again. I don’t know when it will crash, but a good bet it will be when almost nobody expects it.

To mention a popular quote.

Thanks Jared. I believe it is a one thing bubble, the counterfeit currency, the fake debt note dollar, that is the evil vampire squid. The vampire squid dollar is looking for a place to hide, running out of places to hide. As the fake phony paper currencies seek to buy up assets in a something for nothing scam, prices of everything rise. This is how the end game gets a reset. If I can counterfeit the currency I don’t care if a can of Coke is $1,000,000. For me, the counterfeiter, it’s free. Everything is free to counterfeiters who savage and destroy anyone saving in fake counterfeit currency. The global economy is destroyed. The local economy is destroyed. It’s a counterfeiting currency cartel problem driving prices of assets up. In 2007, it hit food and fuel, which caused global riots, taking down nations. Now it’s hitting financial assets, inflating all financial assets of all nations, globally. It’s just the dollar losing value, not the assets rising in value.  It’s a global counterfeiting currency crisis, started in 1966. The Dow was 995 US Treasury silver dollars in 1966 and the Dow is 995 US Treasury silver dollars in 2016. Only a bubble in counterfeit currency, not real money. Gasoline was three silver dimes in 1966 and now gasoline is TWO silver dimes in 2017, as cheap as at any time in history. It’s not an everything bubble. It’s simply a global counterfeiting currency bubble, a counterfeit currency bubble. Sadly, those who save in paper currency are being wiped out. Protect yourself. No one else can or will.