I have been a bond bear for a while. Back in the summer of 2016, I spoke at a small conference out in San Diego. My topic: how interest rates were going to go up.

It didn’t go over very well with people.

One guy in the front row got really upset, and started sputtering about how I was totally wrong. He seemed pretty angry. I was actually a bit scared. I’ve been to some conferences where people were scratchy, but I never before thought I was going to get my ass kicked.

I haven’t been invited back to speak, which is too bad—because I was right.

The evidence is starting to pile up that yields may be going even higher.

As you know by now, the Fed is letting assets roll off the balance sheet. A little at first, but more later. This is not a small thing! New Fed Chairman Jay Powell wants this to be smooth as a gravy sandwich, but let’s see how it plays out before we take any victory laps.

Meanwhile, the ECB is tapering, and will taper more…

The Bank of England seems to be finally lifting off…

What had once been a flood of global liquidity is now starting to run in reverse.

So, if you remember all the complaints about central banks, that:

1) They had inflated asset prices

Then you can expect:

2) And rich people to get poorer

This is what you have been waiting for, right? Rich people to lose money?

Rich people will lose money because asset prices will deflate. What kind of assets? Financial assets—stocks and bonds.

Yes, in the next bear market, stocks and bonds will likely go down together.

People have become accustomed to an inverse relationship between stock and bond prices. Funny thing about stock-bond correlation. The long-term average is zero. But sometimes it is 1, and sometimes it is -1.

There are a lot of people holding 70/30 or 60/40 portfolios of stocks and bonds, thinking they are diversified. They are probably not diversified. To be diversified today, you need to be a bit more imaginative about what asset classes you include in your portfolio—and have a healthy dose of cash (we talk a lot about portfolio construction in ETF 20/20).

Anyway, a pretty good leading indicator of asset prices deflating and rich people getting poor is Sotheby’s, the auction house. Quantitative easing didn’t just fluff up stocks and bonds, it fluffed up art and crap as well. 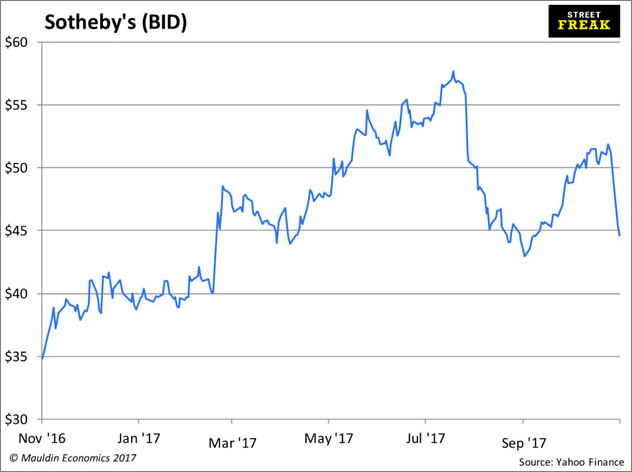 The chart is making lower highs. We might be onto something.

The Chicago Mercantile Exchange is listing futures on FANG and bitcoin. You probably heard. And when I say FANG, I mean a small basket of stocks including Facebook, Amazon, Netflix, and Google.

Most people would objectively say that FANG and bitcoin are bubbles. There might be some disagreement, but not much.

The CME is getting pretty far away from its mission of providing a mechanism for managing or mitigating price risks in commodities. These products are purely for speculation. We’re not even sure that bitcoin serves any economic purpose.

Let’s look at the history of listing derivatives on bubbles. The listing of ABX led to the destruction of the subprime mortgage market. The listing of CMBX led to the destruction of commercial mortgage-backed securities. Heck, even the Nikkei futures were listed right near the top of Japan, in 1989. And lots of people think that tulip futures are what did the tulips in.

I was talking with a good friend the other day, a bond salesman who has been around for a while. He is fifty, and has quite a bit of grey in his beard. We were talking about how cool it was that 1 year Treasury bills yielded almost 1.5%, and how you can get 1.5% in an online savings account.

We will get back there eventually.

What I wonder is if economic growth ... or rather, lack of same ... in the US will be sufficient to drive rates higher.  Despite prospective fiscal stimulus, significant headwinds such as demographics (the oft cited 10K turning 65 every day), automation and consumer debt may keep growth in the 2% +/- range. In addition, headline #‘s aside, there is slack in the employment data and this is reinforced by very slow wage growth.  Thus, I am open minded but inclined to think that a big surge in rates is unlikely.  No axe to grind here; zero exposure to bonds.