I encourage you to take a long view. This is a bit like the 2000–2002 bear market in that you never really had a spike in volatility until the end, and it was just a slow Groundhog Day grind down, day after day after day. I remember thinking to myself, when does it stop? When does it end? It is starting to feel like that now. Of course, the summer of 2002 was a pretty good buying opportunity. For tech, it was the best, ever.


And some great opportunities will come out of this, especially in Europe and Emerging Markets, where it’s 1982 all over again. I call this the 6/6 zone, where everything is trading at a 6 P/E with a 6% dividend yield. US stocks are still a tad expensive, but that’s not the case with stocks overseas. And you get paid a huge amount of money to wait.

Recently, I asked the internet how Powell would conceivably walk back some of the rate hikes now that they are pot-committed. My thesis is that the Fed already blew up Great Britain, and they probably got some phone calls from cross Bank of England governors. They know that if they continue down this path, they will blow up something else. The bond market is a mess, and we’re looking at forced selling from places like Japan, which might need to sell US Treasuries to raise dollars to pay for energy. It has turned into a positive feedback loop, where liquidity is bad enough in the bond market that it might lead to a dislocation (which is the nice way of saying it).

So again, how would Powell walk it back? Here is one possibility:

Or he might go to Nick Timiraos at the New York Fed. Or any of his designated representatives might say this in a speech at someplace like the Money Marketeers Association. I haven’t heard anyone say that the Fed is behind the curve in a while. They are way ahead of the curve. In fact, forward rates are the furthest ahead of Fed funds than they have been in the last 50 years. We have already had a lot of verbal tightening. We’re pricing in over 4.5% terminal Fed funds in June of next year. Chicago Fed president Charles Evans recently said that the Fed shouldn’t overdo it, that they should wait and gauge the effects of the work they have done so far.

I agree with all of this.

And yet, optics come into play. It’s tough to pause in the middle of a rate hike campaign when the last CPI print was 8.3%. There has been some progress on inflation, but not a lot. But as you know, the CPI statistic is severely lagging, and more forward-looking indications of inflation have fallen significantly. 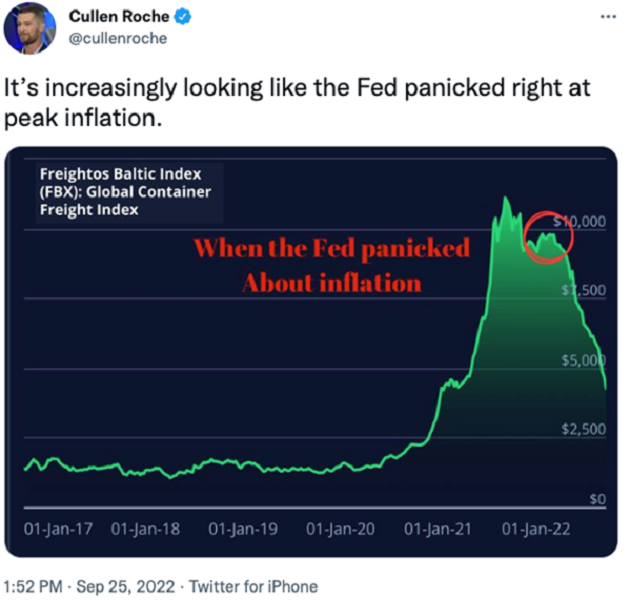 Markets can rally a lot on a slight shift in expectations. The S&P 500 rallied 17% a few months ago when Atlanta Fed president Raphael Bostic hinted at a pause. At the moment, everything depends on liquidity. Looking forward, I would say that in a year’s time, interest rates will be lower, and stocks will be higher. It is the timing that counts.

A Note on Sentiment

Every financial advisor I talk to is doing nothing but trading short-term rates. Bills and two-year notes. That’s all they do. Nobody is trading stocks. Nobody has any interest in stocks! Everyone wants to get 4% risk-free.

Think about how incredible this is, especially considering that back in 2021, if you told people that you were getting out of the stock market for a 4% return, you would have been laughed out of the room. If I had put that on Twitter last year, that I was eschewing stocks and crypto for T-bills, I would have had to delete my account. But here we are.

You must pay close attention to sentiment. How many times have you been in polite conversation with someone, and they bring up I-bonds? You can get 9%! If I had a nickel for every time I’ve heard about I-bonds in the last two months, I wouldn’t need a mortgage on my house.

Let me gingerly say that I think we’re approaching bubble-like conditions in short-term rates. It is a frenzy to buy these things, whether through a financial advisor or on Treasury Direct. In fact, I heard that Treasury Direct was down recently because of high volume! If that isn’t a sentiment indicator, I don’t know what is.

The Fed has gone as far as it can reasonably go in tightening monetary policy. Beyond here are dragons. We will get a pause or a pivot soon.

Music From the Party

Hey, I recorded the set from the party I threw two weeks ago—you can listen to it here. High-energy party music—you will love it. And give me a follow on SoundCloud while you’re at it—I’m trying to get to 2,000 followers.