Everyone knows that Toys “R” Us went bankrupt. Very sad. And largely preventable (we will save the private equity conniption for another week).

That is not usually how things work in credit markets. Usually, smart analysts study a company and figure out well in advance of the bankruptcy that bankruptcy is a possibility. Sometimes these analysts know the company better than even management does.

The analysts tell their traders that the company is doomed, and the traders short the bonds, knocking down the price.

Then word starts to spread that there might be a problem, then other analysts will study the company and other traders will short the bonds, and by the time the actual bankruptcy happens, it is a foregone conclusion.

That is what happens with efficient markets. Okay, everyone knows that markets are not really efficient, but look at this freaking chart. 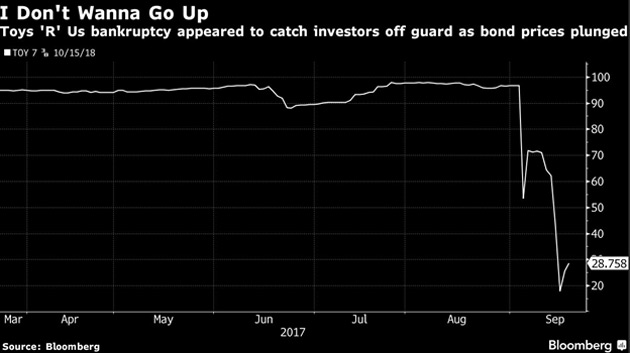 I would argue that markets are less efficient than they were ten years ago.

Wait, aren’t markets supposed to get more efficient over time?

It isn’t working out that way.

My diagnosis is as follows. There are fewer people analyzing securities than there used to be.

Basically, banks and big hedge funds are spending lots of money on technology and less and less on human capital. Co-locating servers so you have a 3-microsecond latency is sexy.

Some 31-year-old dude from Wharton sitting in his office until midnight, ordering Seamless, poring over company filings, is not sexy… but that is how you figure out that there is a problem at Toys “R” Us. All the computational power in the world isn’t going to help you.

Of course, as I say this, some quant reading this letter is pretty certain he can program a robot to take the analyst’s job. You know, some things you just can’t (and shouldn’t) automate.

I don’t really know if there are fewer securities analysts—the last job counts I saw on Wall Street had employment levels pretty much unchanged over ten years. Certainly, there are boatloads of people taking the CFA exam. Which brings me to point number two.

There is another possibility: securities analysts are dumber than they used to be.

I am going to go on the record here and say that the CFA might not be a good thing. For one reason: it encourages groupthink. We are teaching hundreds of thousands of people to look at the market in exactly the same way.

I would also argue that it doesn’t teach security analysis—it teaches you how to take an exam. Think about it: all the hundreds of thousands of CFAs that we’ve minted over the years, and the business of analyzing markets has gotten worse, not better.

The Market Is as Efficient as a Cloth Diaper

Toys “R” Us bonds are not the only instantaneous blowup in the capital markets. Can you think of another? 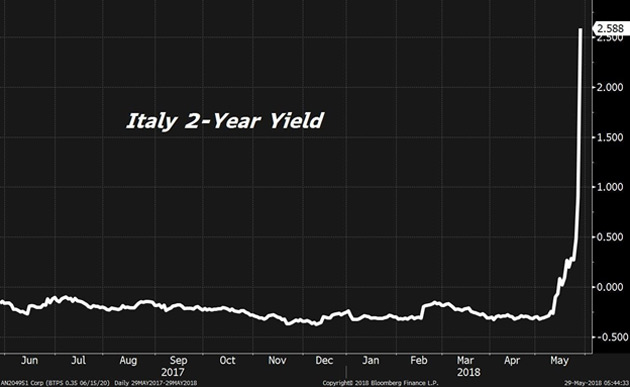 The result of the election was a bit of a surprise, but seriously, who is caught off guard here? Everyone knew that this was a possibility. The convexity is massive, mostly for structural reasons, as the ECB has spent the last 7 years selling options (implicitly). But again, one day Italy is fine, the next day Italy is a problem.

There is an old saying—when everyone thinks alike, no one is thinking.

The lesson here is that the market is extremely short-term efficient, but not at all efficient in the long-term.

Day trading is stupid and pointless. Your time horizon on a trade should be 1-5 years, or more. I said this in the very first issue of ETF 20/20: you should be aiming to get rich in a slow, deliberate, and sustainable way.

And if that sounds good, maybe you should consider joining us.

These knuckleheads trying to scalp stocks on their Robinhood apps for a couple of hundred bucks are why we can’t have nice things.

Don’t get me wrong—there was a point in time where day trading used to be profitable. Like, 20 years ago. Which brings up another pet peeve of mine. I have met so many people over the years whose goal it is to “trade for a living.” That should not be your goal. You know why not?

Because trading for a living sucks.

The funny thing about Warren Buffett is that as successful as he is, nobody really makes a serious attempt to emulate what he does. Because it requires patience.

If I were running $3 billion, I’d hire 15 analysts with undergraduate majors in things like music and anthropology and give a big bonus to whomever came up with the stupidest idea.

My CFA charter is #5378.  So, ancient.  Like, Stone Age era.  Back then, the exam actually required the applicant to learn security analysis. Once the CFA minions started getting commercial and quit emphasizing analysis, I stopped renewing my charter.  Now, still using my dinosaur skills, which seem archaic, I take heart from Jared’s article, that technology is producing inefficiency back into the markets.  The original dinosaurs became extinct, but maybe the current ones can survive, with the help of hard work and just a little common sense.

Jared is exactly right about education. I got my CFA at 55 years of age after decades of experience in industry. The credentials are not as useful without real world experience.