A few weeks ago, I said the bear market was over. What if it isn’t? Don’t interpret this as cold feet—it’s good to understand the other side of the argument.

Basically, there is only one side of this argument: The Fed will never stop hiking interest rates. Right now, it sure seems that way. There has been no talk of even a pause. We even learned that Minneapolis Fed President Neel Kashkari was “happy” stocks fell lower after Chairman Jerome Powell’s speech at Jackson Hole.

With that monetary backdrop, it’s hard to get bullish. But let’s operate in the real world here.  How high could the Fed conceivably hike rates?

Well, inflation is currently at 8.5% (and probably going lower). So, it’s conceivable that the Fed could hike rates to 8.5%. But that is not realistic. What is realistic? 4.5% is realistic. Maybe five. At that point, it would be irresponsible for the Fed to continue without pausing to evaluate the effects of the rate hikes. Of course, they are not acting very responsibly at the moment.

Criticizing the Fed has become a national pastime. You don’t see too many people saying the Fed is doing a good job. Practically none. At various points in history, I have thought the Fed did a good job. I thought the rate hikes going into 2000 and 2007 were thoughtful and measured, though Alan Greenspan made one big mistake along the way—waiting too long to raise rates in 2003. That error proved costly.

Most people think Paul Volcker did a good job as Fed chair from 1979–1987. He certainly took no prisoners. 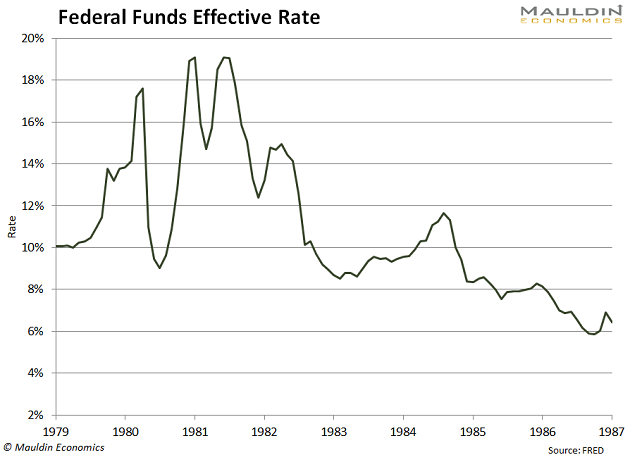 If Powell hiked rates like Volcker did in 1980, there would be a lot more pain out there, I assure you, and there is a lot of pain already. GDP dropped 6% during that recession. Nobody could stomach that today, so we’re getting the water torture of consecutive 75-basis-point hikes.

Since we’re using Volcker as the analog here, it is worth pointing out that we got a pretty good bull market after the rate hikes ended. In fact, the biggest bull market of all time. It went on for 18 years. I suspect there are going to be similar opportunities coming out of this rate hike campaign. Maybe not an 18-year bull market, but it will be good. That is what we have to look forward to.

But yeah, that’s pretty much the bear case. Oil prices are going down. Inflation is coming down.  Earnings have been pretty good. If you step back and look at it objectively, things are not all that bad. Europe is in checkmate with energy prices, but most of us don’t live in Europe. Come on, people. Don’t act like you’ve never taken a drawdown before. We’ve survived much worse than this.

I challenge you to find a bear case other than “the Fed is going to hike a lot.” And by the way, the bear markets we’ve had as a result of rate hike cycles have not been the really bad bear markets. And that’s basically all this is.

I’m not dismissing the bear case. It’s a legitimate bear case. If the Fed raises rates to 7%, the S&P 500 is going to drop 50% from the highs. I like to think I have some pretty good insights into central banker psychology, and by the way, we have an election coming up. Powell isn’t Volcker, this much we know.

A lot will depend on the CPI prints. In fact, it pretty much all hinges on the CPI prints. If inflation struggles to get below 8%, you’re not going to see a letup in the rhetoric. I know we have some less-experienced readers of this newsletter, and a lot of people think that CPI going down means we must have deflation. Not necessarily. It means that the rate of inflation has slowed. In July, it slowed to zero. If inflation is zero for the next few months, CPI will drop sharply.

It is always good to think about both sides of the argument. So, in this newsletter, I’ve examined the bear case and dismissed it as a pile of scrambled eggs, with one caveat: If this Fed is actually insane, if Powell turns out to be Volcker, then we have a lot more downside.

The bright side? Valuations will be cheaper than they have been in years. We are getting there already.

The Bear Market Is Over