I have always been an avid music collector. I had a collection of about 700 CDs, and a few hundred cassette tapes, before everything went digital in 2008.

I had these giant CD racks in my house. Everything was in alphabetical order.

I was always in search of good record stores. Most of the time, I had to make do with the Record Town in the mall. But whenever I found my way to a big city, I would go to Tower Records, like the one on South Street in Philadelphia.

In 1998, I was living in the San Francisco Bay Area, and there was a Virgin Megastore downtown, but I didn’t get there much. I had just heard that you could order CDs on this thing called Amazon (AMZN).

I tried it, and it worked! Game changer.

Amazon was great for books and CDs because of this thing called the “long tail.” Since they didn’t have shelf space, they could carry hundreds of thousands of titles. And of course, I was ordering super obscure stuff.

I ordered so many CDs off of Amazon in the first year that they gave me a gift—a coffee mug.  Virtually all of my disposable income was going toward CDs on Amazon.

Here is the key point. I remember saying to myself at the time—this is the greatest company in the world.

Now, if at that point you’d told me that Amazon would have a $1.5 trillion valuation, and Jeff Bezos would become the richest man in the world, I would have believed you.

I still didn’t buy the stock. 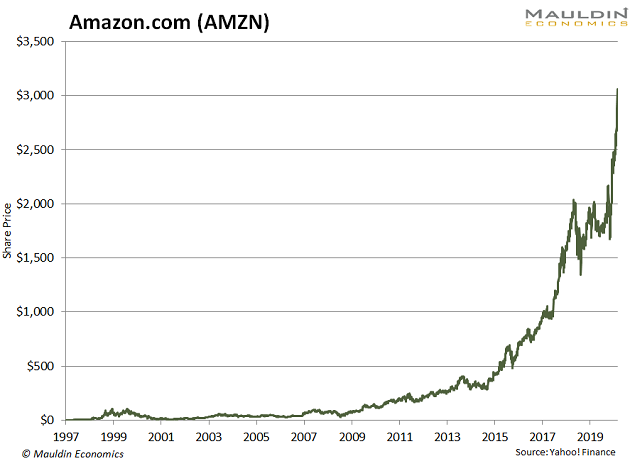 Why didn’t I buy the stock? Because it had already run up about 400%, and I thought I was too late. I missed the whole thing.

I also had a nagging feeling that this tech stock mania was getting out of hand, and I was right—if I had bought the stock, I would have had a nasty correction during the dot-com bust.

But think about this—if I had just bought the stock and held on for life, it would have been the trade of a lifetime.

What should your holding period on stocks be?

I say this all the time on The Jared Dillian Show—the people I know who have done the best investing are people who paid for help, paid high commissions to buy a portfolio of about 20 stocks, and held onto them forever.

One or two of those stocks go to zero, most of them go nowhere, but a handful go to the moon. This is what most portfolios look like, unless you are dealing with sketchy microcap stocks.

I have always been a long-term thinker, but not a long-term investor. Which is a shame. At heart, I am still a trader from my Lehman days. I like to take profits.

You’ve probably heard this old anecdote—the brokerage accounts that do the best are the ones where the account holder dies and everyone forgets about the account. You don’t sell stuff, and it goes up over time.

Think about this—I had the vision to see that Amazon was going to be a massive company far off in the future, and I did nothing.

I avoided the correction, but I didn’t have the intestinal fortitude to buy it in 2002, either. Because that is the nature of bear markets—you’re paralyzed with fear. At the time, I was worried about getting laid off; I wasn’t worried about buying Amazon.

There are a few times in your investing career when you get the highest level of conviction on a stock. Your belief is unshakeable. And it has to be because at some point, you will be tested.

Say you were a believer in Netflix (NFLX): 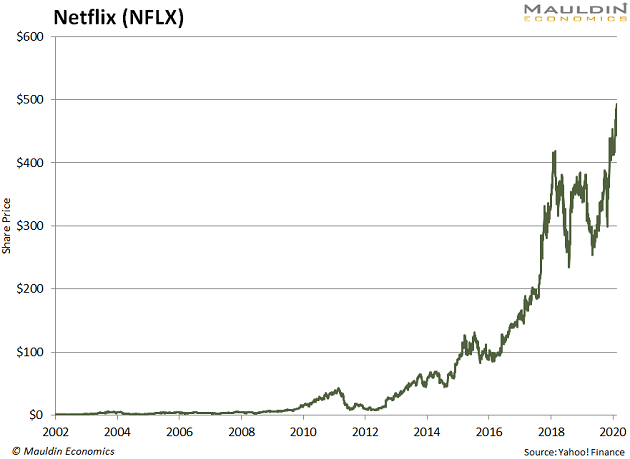 You’ve had some breathtaking drawdowns over the years.

The only people I know with more conviction than NFLX investors are bitcoin investors. I should know, because I am one of them. When people ask me about risk management in bitcoin, I just tell them, “Stop at zero, limit at 100,000.”

But implicit in having an unshakeable belief in a stock is the belief that “things” will continue to get better over time. I asked this question recently on Twitter:

In the short run, I think things will get worse. But over any 20-year period of human history since industrialization, things have gotten better. Unless we truly go back to the Dark Ages, things will get better, and stocks will probably go higher.

I don’t even agree with the statement that stocks are the best way to save for your retirement.  They aren’t. I believe that a mix of asset classes is the best way, like we have in The Awesome Portfolio.

But if you own stocks, you have to stop thinking like a trader and start thinking like a dead person, which is to say—don’t check your brokerage account more than once per year.

Hi Jared, when you lived in San Francisco you should have gone to Amoeba Records, down by Golden Gate Park. They have a huge collection of obscure/hard to find titles; whenever I visit my son out there a trip to Amoeba is at the top of my list.
Check it out next time you’re out there.