Occasionally I give talks at financial institutions on mental health in the workplace. At one of these, during the Q&A, a woman asked if I was an empath.

I didn’t know what that was. I looked it up later. It’s a person with a paranormal ability to ascertain the mental or emotional state of another individual.

Feelings are important in finance. But nobody talks about that. We spend most of our time with our heads in spreadsheets, looking at numbers.

But the answer is not in the numbers.

Back in March, during the middle of the meltdown, the stock market was trading on raw, unadulterated emotion. I tweeted this:

By the way, I am very scornful and/or dismissive of the chartered financial analyst (CFA) program. Like I said, the answers are not in the spreadsheets. The answers are on Twitter, in newspapers, on TV, and in conversations with people you know.

I have had a 21-year career on Wall Street, but I don’t know how to analyze financial statements. I barely know how to use Microsoft Excel.

I flunked Level 2 of the CFA and quit. But my former colleagues will probably tell you that I was a pretty good trader. And I probably have a more sophisticated understanding of risk than most.

Sentiment analysis is the study of feelings—knowing that human beings are hopeless at trading from an evolutionary perspective. We are excited by higher prices and demoralized by lower prices.

People don’t like to talk about feelings. It’s not a science. It’s squishy. It’s “voodoo” (certainly no more voodoo than lines on a chart). Plus, it’s feelings—nobody wants to talk about their feelings. We’re all a bunch of tough guys.

I’m going to give you my framework for thinking about sentiment. How I interpret information, and how I apply it to trading.

Easier said than done. In fact, most people know this intellectually, but they still don’t do it.  Because it’s hard.

Who would short Amazon (AMZN) right now? Or Tesla (TSLA)? It’s madness. You’d have to be out of your tree. 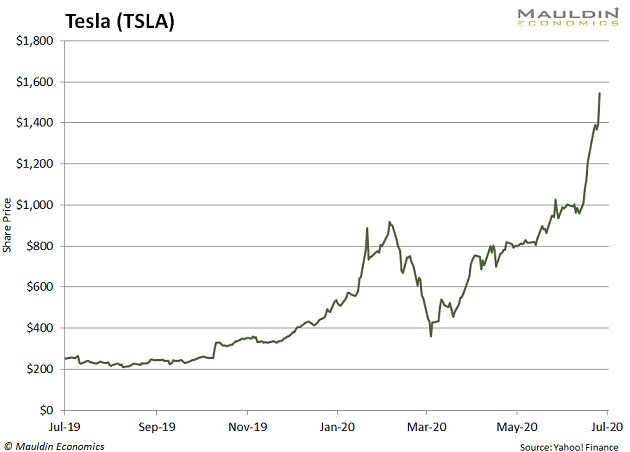 The insane trade is usually the right trade. That’s why this is hard, folks.

Was anyone buying oil at negative $40? It was the point of max bearishness. Again, you’d have to be out of your tree.

But at this particular moment, people feel really good about Amazon and Tesla, and a couple of months ago, they felt really bad about oil.

Anyway, this article is going on the website, and six months from now, you can go back and see if this worked.

Everyone knows how sentiment trading works. They just don’t do it, because it’s too hard. By that I mean it’s a reputational risk.

Trading sentiment makes you take positions that will harm your reputation if you are wrong.

This is not the type of thing you see on the highs.

You have to put people into one of two buckets:

98% of people go into the dumb bucket. If they are bullish on stocks, you want to go the other way. Dumb doesn’t mean dumb—plenty of smart people are dumb.

What I mean by dumb is a person who is influenced by all the voices around him, whether it is CNBC, social media, or people he talks to. That describes most of the population.

People in the smart bucket are independent thinkers. They aren’t influenced by all the noise around them. These people have better-than-average market calls.

There is an adage on Wall Street that the people who are wrong all the time are valuable, too—you just do the opposite of what they do.

Whenever I hear an opinion on the market, I consider the source. Is this someone whose opinion I respect? Or is this one of the lemmings?

I consider the source of everything I read on the internet. Most of the mainstream news goes into the dumb bucket. TV, too. There are a few newsletters I pay attention too, and a few analysts, but not much else.

By the way, the green section of USA Today is the perfect contrarian indicator known to mankind. If USA Today is writing about Amazon and Tesla, it is time to go the other way.

Along those lines, Elon Musk now has more money than Warren Buffett.

This is what we call in the business a BIG SENTIMENT INDICATOR. The symbolism of this is impossible to miss. The brilliant and depraved Elon Musk with his minimally profitable car company passing perhaps the greatest investor of all time in terms of cash in the bank.

The last time I saw something like this was back in 2011, when the SPDR Gold Trust (GLD) surpassed the SPDR S&P 500 ETF Trust (SPY) in assets for a single day—and that marked the top of the gold bull market.

You have to be on the lookout for this stuff.

I have spent the last 20 years trading off anecdotes like this. If it didn’t work, I wouldn’t still be around.

Put your pencils down, pick up the phone, go outside, and start talking to people. Ask them how they feel about stocks. Don’t just listen to what they say, listen to how they say it.

Every single conversation you have, every single article you read, every tweet you scroll by is a data point. If you’re a sentiment investor, you’re analyzing data—just in a subjective fashion.

As for the CFA, I would rather have hantavirus.

We recently took a short four day vacation. The truck traffic on the highways was incredible, and every rest area was overflowing with trucks. A sentiment indicator? I don’t know about that, but I infer that the portion of the economy moved by trucks is alive and well.

Jared, I agree with your analysis, but the other part of trading that makes going against sentiment so tough is timing. I do not short stocks, although I do buy puts on occasion, where my risk is strictly limited. Is Tesla over-priced at $1500? To me, it seems obvious, but it also seemed overpriced at $500. If I owned Tesla today, I would sell it though. I simply could not sleep at night if I kept holding.
I also learned back in 2008 that a bear market is much less painful if one has a large cash position. I was almost 50% in cash when the crash started (and well above 50% as my equities dropped), and looking at falling stock prices as opportunities to buy rather than a reason to puke, actually encouraged me to buy some great stocks near the lows.
I am currently over 25% in cash, and am watching some of my current positions to sell if they reach silly levels. I also have a couple of inverse positions that should do very well if the market does crash, which will give me more cash to invest at lower prices.
This is part of my personal psychological preparation for the next crash, as I KNOW the toll it takes on me personally to watch everything in my portfolio drop, day after day, week after week. I miss some of the upside on the wild runs, but I’ll be prepared emotionally to buy when the moment comes that I should. Or at least that’s the plan. ;-)

most of the time i enjoy your comments.  however, being discriminated against based on having a CFA i find a bit over the top!  i worked hard to get my CFA.  i prepared for long hours to pass those ornery exams!  CFA lives matter also!  i hate to break this to you, but you sounds a little bit bitter Jared!

hantavirus???  seriously????  what are you, a rodent? apparently it is a rodent disease? i will just stick with my CFA instead.  thanks.

Hantavirus - what an obscure disease. I represented the lab that developed the first test for it. Pretty funny.

Exceptional 10th Man article today, 16 July 2020. I really found it hit home to me. Thanks Jared for your learned insight every week.
Doug