Usually I don’t put explicit trade ideas in The 10th Man, because, well, you should pay for ‘em! This idea is free, so it is probably worth what you paid for it.

The idea: there is too much panic about interest rates going higher. It has become a consensus trade. I have been pounding the table on short bonds for years, but… now is the time to go the other way, at least for the time being.

Here is a chart I borrowed from @HayekAndKeynes. It shows the divergence between tech on the one hand, and rate-sensitive stuff (in this case, REITs and Utilities) on the other. If there are any mean reversion people left, now is probably a good time to bet on mean reversion. 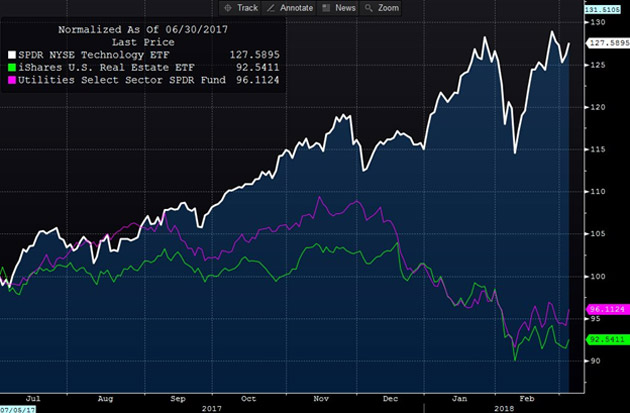 A good heuristic to find trade opportunities is to think about what sort of trade ideas make people angry. The folks at Mauldin gave this a nickname a couple of years ago: “angry analytics.”

One of the attractive things about the short duration trade is that it is mathematically perfect. We are going to be running huge deficits, far out into the future, and this supply of bonds will far exceed the dwindling demand from overseas.

Well, the funny thing about demand is that you never know where it is going to come from. We are running $1 trillion deficits now; back in 2009/2010 we were running $1.8 trillion deficits—and interest rates went down! People showed up at those auctions, and bid lustily. They might show up at these auctions yet, if they are incentivized to do so.

First of all, yields are starting to look attractive. We’re getting near 3% on tens, and 3% on ten year notes (risk free, I might add) is going to look tasty to a lot of people. In fixed-income land, they call this the Rule of Fives. Every time bonds get near a big figure, people find value.

Because they are dumb.

And remember, it’s not just the magnitude of the move that counts—it’s the velocity. Yields are up about 140bp off the lows, but it’s taken a long time to get there. 140bp over a year means something different than 140bp in a month. People have had time to adjust. They are panicking, but there’s no reason for it.

You want to be bullish on the thing that if you told people, they would be angry. People would call you a fool for buying bonds. If you went on CNBC and told Rick Santelli you were buying bonds, he would probably call you a fool (actually I have no idea what Santelli’s position on bonds is, but he seems like the kind of guy who would be bearish).

You could buy bonds, or you could buy things that are correlated to bonds. In which case you would be an even bigger fool.

Let’s take this one step further. Let’s come up with the stupidest trade idea in the world.

So buying bonds is stupid. Buying REITS is doubly stupid, because they have adverse exposure to rising interest rates.

You know what is the stupidest idea of all?

Everyone knows malls are all going tango uniform. Amazon has killed them all. All that is left is a Hot Topic and maybe a $15 massage kiosk.

Hell, the mall in Myrtle Beach actually has a physical compact disc store. You can’t get any more donkey than that. It also has an Abercrombie & Fitch, which is deserted (and doomed). They might as well capitulate and put the Planet Fitness in there.

Everyone knows all malls are going out of business. It is only a matter of time.

We have reached peak bearishness on malls?

The mall REIT trade isn’t priced for perfection. It’s priced for whatever the opposite of perfection is. So by buying a mall REIT, you want…

That, my friends, is the essence of 10th Man trading. It is the duty of the 10th Man to disagree. And it works a lot.

I’m not going to select any tickers in there—you can do the last bit of research. Let’s revisit this about a year from now and see how the idea worked out. I bet it’s up.

Actually, I bet it outperforms the S&P. I bet it is negatively correlated to the SPX. I bet it generates alpha.

Go on CNBC and tell them that your best idea is buying mall REITs, and see what happens. You’ll get laughed off the set. Everyone knows malls are going to zero.

If you want to tune in, you should check out the SIC Live Blog—it’s updated in real time with important points from each session, and there are plenty of video interviews with speakers being posted. Here’s the link, I can guarantee you will learn a lot when you click.