Sports bettors are bored, and they’ve turned to trading stocks.

There is a certain type of risk-seeking person who just needs action on something—it doesn’t matter what. I’m not one of those people, but I am known to buy the occasional lottery ticket.

I first learned how to gamble in a casino in 2004, at age 30. My wife and I would drive to Atlantic City in the middle of winter and get a $39 hotel room. Then we’d head to the casino floor and screw around with $5 blackjack and craps. It’s hard to do too much damage playing $5 blackjack.

Why do people gamble if everyone knows the games have a negative expectation, meaning you lose money in the long run?

There are two reasons:

I know the basics of counting cards. I know the theory behind it, and how it is done. But it takes practice—lots of practice—and I have never had the patience for it. For $20 an hour, it never seemed worth it.

And by the time I learned about it, the casinos had wised up to all the card counters after Ben Mezrich’s Bringing Down the House came out. It’s fairly unglamorous work, and you have to put up with a bunch of drunk knuckleheads.

I’m not into casinos much these days, other than to put $100 on a baseball game, sit in the sportsbook, and eat a $25 cheeseburger. I have friends who gamble thousands of dollars at casinos, and they wonder why I don’t do the same.

Again: I’m not an advantage player, and I’m not optimistic about getting a short-term run of luck. I’d rather play in the financial markets, which do not have a negative expectation.

Not a Zero-Sum Game

Craps, blackjack, roulette, and pretty much everything else are zero-sum games, with an edge to the house. The financial markets are not a zero-sum game, but there is a house. Market-makers are the house. And the odds are firmly in their favor.

In stocks, options, and, increasingly, bonds, large electronic market-making firms play the role of the house. If fact, your orders are so profitable for them that they actually pay to receive them.

This is because your orders often have negative informational value. This makes it easy for a market-making firm to take the other side of your trade, or profitably transfer the risk somewhere else.

It’s funny—commissions are now free, but the cost of execution is higher than ever, which people do not appreciate.

Retail investors have responded by trading more than ever... 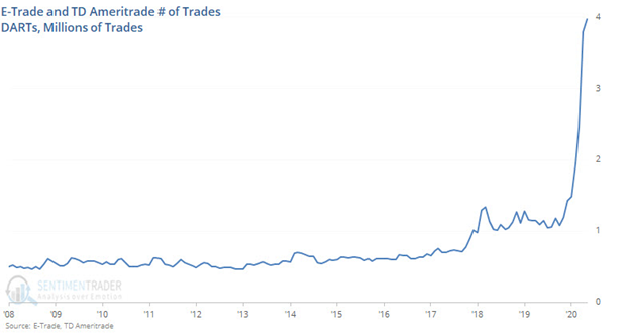 But investing is not a zero-sum game. Stocks pay dividends, and they go up over time. Bonds pay coupons. The problem is that people put themselves in situations where it IS a zero-sum game, either by trading frequently or trading in the derivatives markets, which are zero sum.  After paying execution costs, you’re back to where you were in the casino.

The only place you have an edge is the longer term. That’s because…

Computers can look out a couple of milliseconds, or a few seconds, or even a few hours—but they can’t look 10–20 years into the future. Only human beings can do that.

If, in 2007, you saw the first iPhone and said, “this is the future,” you could have bought shares of Apple (AAPL) with a time horizon of a decade or more. The computers can’t see beyond the end of the day.

You could have done the same with Chipotle (CMG) or Home Depot (HD), or pretty much any stock at the top of the S&P 500.

The people I know who have made the most money in the financial markets paid for a financial adviser, paid expensive commissions, and bought a diversified portfolio of 20 or more stocks that they held for decades, managing risk the whole way.

I do not know anyone who has gotten rich off of a free-trading app like Robinhood, at least on a permanent basis. Robinhood is not what I would call investing. It is “screwing around with stocks.”

I am against anything that turns the financial markets into a giant casino. I was against zero commissions back when they were announced. The unintended consequence has been a giant wealth transfer from unsophisticated people “screwing around with stocks” to sophisticated investors.

Years ago, Edward Thorp wrote Beat The Dealer about how to beat the game of blackjack—and beat the house. If you want to beat the house in stocks, then invest, don’t trade, because there is a cost to everything you do.

Personally, I’m a strong believer in ETF investing. Instead of picking individual stocks, racking up fees, and stressing yourself out… you can build a diverse portfolio of ETFs and touch essentially every part of the market (technology, health, currencies, equities… on it goes).

Plus, you can save on fees. And saving money is a great first step to making money. That’s why, for the next 48 hours only, I’m offering a deep discount on my ETF 20/20 advisory. Click here to take me up on this limited-time offer.