The reality is: You can choose whatever reality you want.

Wouldn’t it be nice to be right all the time?

I spend most of my time thinking about crowd psychology as it pertains to the financial markets. I will admit that I was very slow to realize the threat that COVID-19 posed to the economy.

In my own accounts, I was positioned for it because I had focused on the negative for a few years. Still, I did not completely grasp how damaging the shutdown would be.

As the shutdown persisted, I started writing in The Daily Dirtnap about what the world would look like when the lockdown ended.

Most of all, I wrote about how people would get antsy and frustrated and want to go outside, and that people would interpret the shelter-in-place orders a little more liberally.

Fast forward to today, and that is where we are. A few states are taking the virus a little too seriously, perhaps. But the rest of the states have decided to let people manage risk on their own. My state, South Carolina, is one of them.

Some people say this will result in a second wave of infections that will be more devastating than the first, resulting in more shutdowns. Maybe, maybe not. We will find out soon enough.

Perhaps there will be a second wave. But for the purposes of investing, it’s pointless to worry about that now.

You ever think about the fact that COVID-19 struck just when the financial markets were most vulnerable to an exogenous shock? You could not have scripted this any better.

Anyway, for the last few years, I was fighting it hard. When it comes to investing, you never want to fight it.

Investing isn’t easy, but if you’re doing it right, it is.

Something noteworthy happened this week: Monday, the day the Dow rose 900 points, saw an abrupt turn in the foreign exchange (FX) markets.

I’m someone who stares at screens all day. It was an abrupt turnaround. 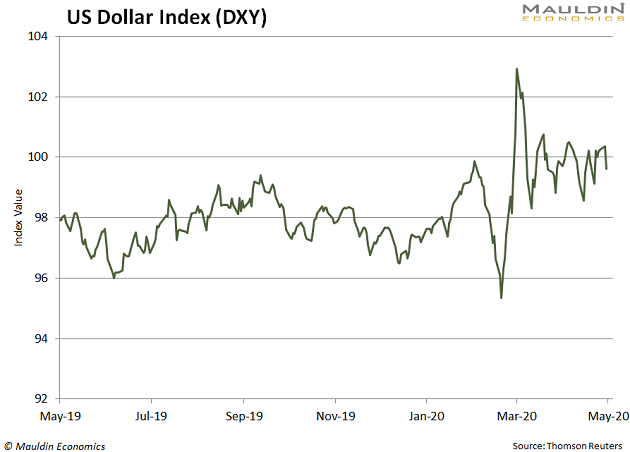 A lot of people in the FX markets are hidebound long USD traders. They keep doing the same thing because it’s been working for years.

When you do something for years, and it suddenly stops working, what do you do?

I have an FX trader friend who publishes a morning note. At the end of every morning note, he says: “Be nimble.” Wise words.

Being nimble means being intellectually nimble. It’s easy enough to turn things around in your brokerage account. It’s not an aircraft carrier.

The question is: Are you intellectually flexible enough to do so?

When people talk about the “endowment effect,” it’s not so much that people fall in love with their stocks. Rather, it’s that people fall in love with their ideas. If you have an idea, it’s very difficult to declare it dead and move on to the next idea—especially if it’s the opposite idea. This is why the editing process is so difficult for writers—they love their own words.

Head on a Swivel

If you believe in the second path, the timing on that is uncertain. You don’t know when this will happen, and there are costs associated with waiting.

I’ve written before in The 10th Man about intellectual flexibility and doing the opposite of what you believe. All of these points are connected: choosing the reality that you want, not fighting it, and being nimble.

Renowned financial commentator Dennis Gartman used to say that you wanted to trade like a mercenary guerilla, ready to switch sides at a moment’s notice.

I will believe whatever is most probable at the time.

The level of cognitive dissonance in the market is as high as I’ve ever seen it. People have chosen a perspective that is different than the perspective of the market, and they’re experiencing pain.

I really don’t feel like stepping into the ring with Mike Tyson, and neither should you.

With my head on a swivel, I can see a Part B to your first path.  You may be right in that we are past the peak of infections and there is no second wave.  However, the snap-back you seem to be anticipating may well not occur, because a large number of companies, large and small, are unable to continue in operation: the “animal spirits” of the consumer have been eaten up by unemployment; and the Fed’s policy of pushing on a string (actually - stuffing the string down the economy’s throat) slow down the recovery, whenever that may be.

Could we be looking at a www shaped recovery?

Keep on challenging our assumptions.

A little quibble here Jared, as much as I love your writing. Reality is not what you make it - it is reality. What your make OF It by your reaction to it, is quite another thing. I think you would agree.

If you ever want to play Surf Club, let me know. We are now open to guests again.

The Bond Market Is Weird