The stock market is pretty terrible. The economic data are starting to roll over. The market is still pricing in terminal Fed funds of about 2.5%–3% in early 2023.

There is no way that happens.

The Federal Reserve is full of chickenhawks. They’re talking tough on inflation, and a lot of people believe them, but I don’t. It is a political weathervane, and it will crumble under the pressure. At some point—not today, but sometime in the near future—worries about the stock market and the economy will overtake worries about inflation. If you recall, the Fed only raised interest rates when it became politically necessary to do so. Now, Representative Jim Jordan (the guy who never wears a jacket) says your 401(k) would be better off under Trump. The Fed is not deaf to these comments. 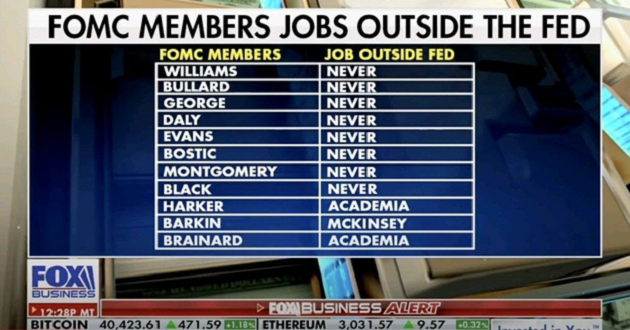 We currently have a hot economy, but we do not have a good economy—they are two different things. The money the Fed and the federal government pumped into the system is still sloshing around, creating distortions. I am building a house, and I was advised to order appliances 18 months in advance because they are so backordered. Tried to buy a car lately? There are none to be found. Not only would a recession be welcome, it would be desirable. Throughout most of the last century, when you went to a car dealership, cars were there waiting for you. When you went to a grocery store, cat food was there waiting for you. Our economy is plagued by shortages and dysfunction.

And it is eminently fixable. All you have to do is raise interest rates—a lot. Members of the Fed have said their actions do nothing to fix the supply side—they only fix the demand side. And that is true. But if you fix the demand side, you also fix the supply side. Raise rates, the economy tanks, and people lose their jobs and cancel orders for appliances and cars. The supply chain issues are fixed. Magic. Which would you rather have, 7% unemployment or shortages of food, fuel, and durable goods? Depends on your point of view, I guess.


But the probability of the Fed hiking rates enough to engineer a recession is slim to none. Because to the Fed, unemployment really is the worst thing in the world. It didn’t used to be. Go back 40 years—a recession rolls through, people get laid off, they look for jobs, find jobs, and go back to work again. Today, if a recession rolls through, people get laid off, they get 99 weeks of unemployment benefits and universal basic income, lose skills, stay home, and the labor force participation rate drops yet again. We have a dynamic capitalist economy. It’s only in the last 20 years that we’ve looked at job losses as The End of The World.

How you feel about this largely depends on who you tend to pull the lever for in November. I’ve heard some liberals frame the Fed funds debate as follows: You hike rates, people lose their jobs and die. By hiking rates, you are killing people. The Fed is guilty of murder. I suspect there are some people in the Fed who feel exactly this way.

But another way to look at this is that people will die if you don’t hike rates. What happens if you don’t hike rates? Inflation gets worse and worse, there is political unrest, rioting in the streets, and we elect a murderous despot. If you find this scenario implausible, remember it has played out a handful of times in human history. Inflation destabilizes civilization itself. It’s worse than recession. Or maybe I believe this because I am part of the vast right-wing conspiracy.

Anyway, the goal here is not to turn up the outrage machine about inflation or deflation. The goal is to figure out how to trade accordingly. If you believe the Fed will blink and pause its rate hike campaign, then you should buy risk assets with veins popping out of your neck. If you think the Fed will follow through on its promise to get inflation back to 2%, then you should prepare for one of the all-time great bear markets. Those are your choices. And they are binary—there is no in-between.

The Fed will blink because it has a track record of doing what is expedient rather than what is right. I’m bullish, for the moment.

I had the great honor of being asked to speak at Coastal Carolina University’s commencement ceremony for the Wall College of Business. You can watch it online here. My intro starts at about 36 minutes.