This election is a mess.

So let’s talk volatility for a second. Volatility is high going into the election (because nobody knows what will happen, and there is a lot at stake). People think that after the election, the uncertainty will be out of the way, and volatility will subside.

Let’s think about this a little bit.

There are a bunch of ways that this election can go wrong:

And that doesn’t include the things we haven’t thought of (including the dreaded electoral college/popular vote split), and can’t think of, because they’re true black swans.

For those of you who were around during the prolonged recount of 2000—do you remember the effect the election had on the equity markets? It was not bullish. I was in New York at the time, interviewing at Lehman Brothers. I remember that the market was not happy. Lots of red on the screen.

And of course, none of this includes the scenario we discussed last week: the possibility of a Democratic sweep, which a Goldman Sachs poll recently put at a 2% probability.

If you want to play this through one of the myriad volatility ETFs, be careful (we will be discussing this more in the not-too-distant future)—just know that it’s probably a good idea to get out of the pool. Expert swimmers only.

I am a crappy political scientist. But I am no dummy.

I started thinking about who the Republican presidential candidate might be in 2020, like perhaps Marco Rubio, and then I started to wonder if the Republican Party would even be around in 2020. I think there is a very good chance that it splits in two and ceases to exist. On one side, you would have the right-wing populists (represented by Trump), and on the other side you would have the classical liberals (represented by Paul Ryan, who is foolishly supporting Trump).

But the Democratic Party is under pressure as well. The Democrats will likely last another four years, but it’s also possible that they could split someday into a center-left party and a far-left party (the Bernie supporters).

Of course the US political system doesn’t function well with more than two parties. We do not have a parliamentary system, though some people wish we did.

There is a lot of daylight here for a centrist party. Many voters didn’t participate in the primaries and were pretty appalled at how extreme the rhetoric got, both on the right and the left.

I’m not smart enough to really predict the future, but I wouldn’t be surprised if our two-party system had changed beyond recognition for 2020. We do change political parties every so often in this country—lots of people have been talking about the Republicans and comparing them to Zachary Taylor and the Whigs. It happens once in a generation. Now might be the time.

Well, you can be sure that one thing is going to happen no matter who wins the election:

Inflation will be going up.

If Donald Trump wins, we will have 35% tariffs on TVs, which will increase in price accordingly. Protectionism sounds great in theory, not so great in practice. The price of all imported goods will rise sharply—especially electronics, where people have become accustomed to prices going down for years.

But Hillary Clinton is also good for inflation. Regulation increases the cost of everything. This is known as “inflation by fiat.” There are a million examples of it. Those costs of compliance feed into everything we buy. The regulatory state has expanded massively in the last eight years, and it will continue to expand under a Clinton administration.

One thing is for sure—inflation is not going down. The only question is, how fast will it go up?

It is starting to get priced into the TIPS market: 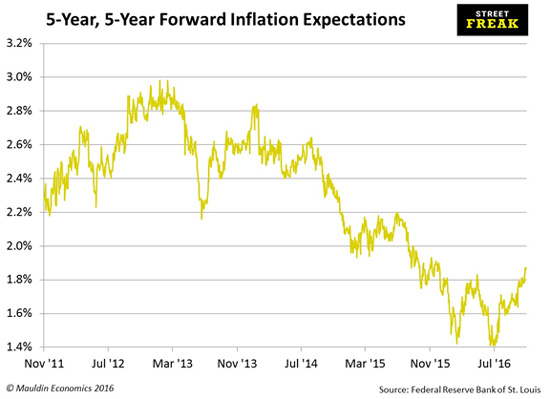 Which is something the Fed watches closely.

You can look at this any way you want. The Fed is either hiking rates preemptively, because of inflation, or belatedly, because of unemployment, but barring any complete collapse in a major economic indicator (like nonfarm payrolls), I fully expect the Fed to hike interest rates in December.

And if this hasn’t been a particularly upbeat newsletter, you can guess where I stand on the stock market.

Music to Your Ears

My music career went on hiatus for a few months after my book came out—too busy—but I’m back!

I recorded this last week, check it out. It’s only an hour; you can listen to it while you work.

I’m trying to put a show together in NYC sometime early next year. You will all be invited. I threw a party for subscribers of The Daily Dirtnap back in 2013, which was loads of fun.