Liberals in ruins, just absolutely shattered. After eight years of smug condescension, I will allow myself four years of schadenfreude.

The conventional wisdom on the election (I just heard Chuck Todd say it on NBC News) is that the election was primarily about economic issues—our manufacturing base being hollowed out, jobs lost overseas, which stoked nativist sentiment, stuff like that.

But I don’t think it was that at all. I think we owe these election results to a cultural phenomenon. People don’t like being called rednecks, racists, hicks, slow, homophobic, transphobic, dumb, unsophisticated, Cracker Barrel patrons—even if it’s true. If you really want to know why Hillary Clinton lost the election, look no further: 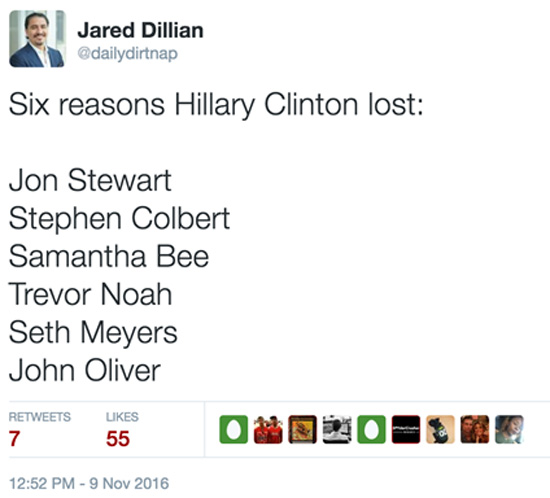 Night after night of this superiority and disdain led us to President Donald Trump. I’ll be the first to argue with flyover country over the merits of free trade, but I’ll do it in a respectful fashion. You take a giant dump on people night after night, this is what happens.

That is neither here nor there, though. This being a financial newsletter, let’s talk about how to make money off a Trump administration.

It is so easy, a caveman could do it.

Luckily, we have already talked about it. Please read this before you go any further. It’s something I wrote back in April.

As you can see from the stock market reaction, the market went from worrying about global thermonuclear war to getting hopeful about Trump’s plan for growth. Tariffs aren’t really a plan for growth, but let me tell you what is:

That is assuming Trump is going to do what he said he is going to do. Which is a stretch, because Trump probably isn’t going to build a wall, and he isn’t going to send Hillary to prison. There are a lot of promises he won’t follow through on. So I’ll believe the tax cuts when I see them.

But the market has hope.

I’d be a fool not to save the good stuff for Street Freak and The Daily Dirtnap, but I will say up front that, on a sector basis, a Trump presidency is bullish for:

Basically, the most-regulated sectors of the economy.

The least-regulated sector of the economy, and also the sector that was most vocally anti-Trump. Big tech likes to shake hands with the government—the relationship between Google and the Obama administration is especially cozy—so what if that comes to a halt?

The number one question I get from people in situations like this is: Am I too late? Did I miss it?

These are trends that are going to continue for months, weeks, years. Nobody missed anything. The hardest thing to do is to buy a chart that is up against the upper right corner of the screen. It is usually profitable.

I didn’t vote for either of them, so I didn’t really have a horse in this race.  But come on Jared, you know as well as I do that the smack talk goes both ways.  Yes, comedians make their living cracking jokes at conservatives’ expense.  It’s good telly.  And to be fair, for the last 20 years (at least) Fox News and a large portion of the talk radio universe has been excoriating and villifying liberals (and really, everyone outside of their ideologically pure enclave) as lazy, stupid, Godless, spineless, traitorous, immoral, amoral, work-averse, dependent on government, want everything handed to them for free, hate America, communist, socialist and so on.  They continue to paint with the same broad brush that Stewart & co use, but the difference is they’re not just going for laughs—they believe it to be true always and everywhere.

I too wish that everyone, on both sides, could just grow up and have an adult conversation.  You’re allowing yourself four years of schadenfreude, just like liberals allowed themselves eight years of schadenfreude after the Bush presidency, and conservatives allowed themselves eight years of schadenfreude after the Clinton presidency, and on and on for the past 200+ years.  I think that’s part of the problem of our ongoing inability to discuss the issues like adults.  Take a few days to gloat if that makes you feel better.  Then let’s sit down and discuss with reason and logic how to move the country forward in a way that doesn’t reflect a zero-sum mentality.  If my team wins, it doesn’t mean your team has to lose for the next four years, and vice versa.  If we can’t do that, then our country really is in trouble, no matter which party is in charge.

She won the popular vote.