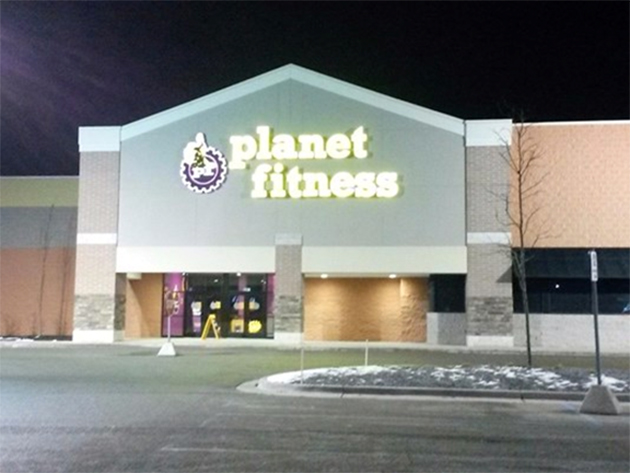 There has been lots of ink (and electrons) spilled over the death of retail.

Everyone knows it is only a matter of time before Amazon puts every department store, every mall, every brick-and-mortar retailer out of business. Amazon gets an infinity market cap and everyone else gets zero. Sound familiar?

Is Amazon a great business? Yes.

Is a department store a bad business? Probably.

Does Amazon get 100% market share, with department stores getting zero? Probably not.

Amazon has over 80 million Prime subscribers in the US. It’s not quite saturated, but it’s getting close. 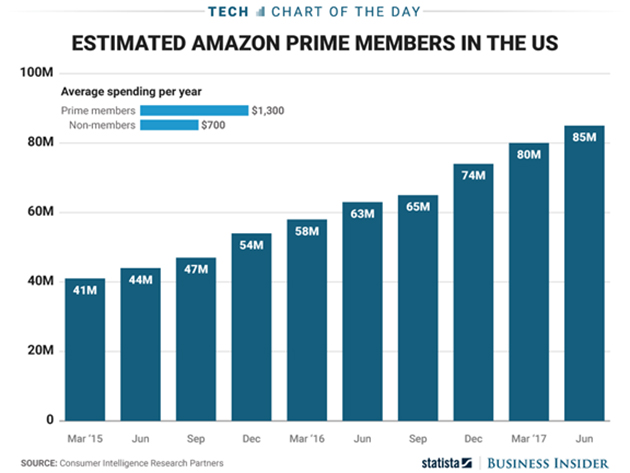 I admit to being a Prime member, a late adopter.

It is pretty cool. Stuff shows up on my doorstep in two days, for free. The huge poker chip set I just ordered probably weighs about 40 pounds—free shipping! And I get all the Prime movies and TV shows.

Sometimes, when I reflect on what a good deal Amazon Prime is, I think that I’m picking Amazon off. But they’re probably picking me off! 80 million customers times $100 is a lot of money.

From a capital markets standpoint, now might be the time to put on the trade.

This is when I started thinking that we've reached a bottom in physical retailers: Last week, ProShares—a $27 billion ETF manager—registered to list some double short leveraged ETFs on brick and mortar retailers!

In my experience, specialty ETFs like this are usually listed at the worst possible times. Plus, you know my thoughts on leveraged ETFs. 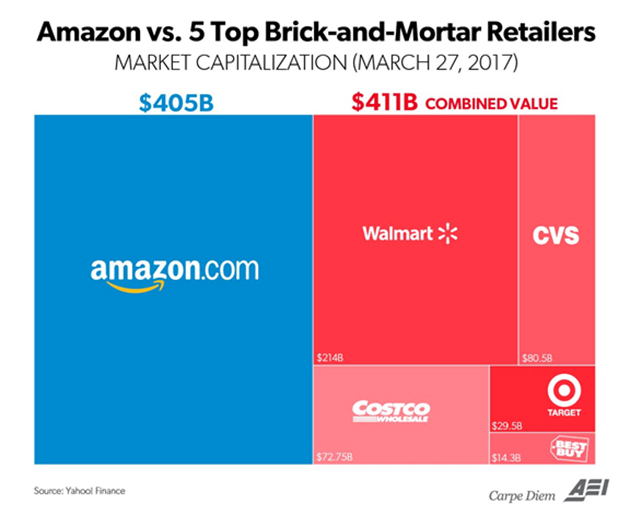 Amazon is worth around 75 times more than Macy’s? That doesn’t seem right.

I hope by this point in the article I have you thinking.

I am no Macy’s fan. It is a pretty terrible business, they sell middlebrow stuff in middlebrow locations. Although their online business is actually not bad. 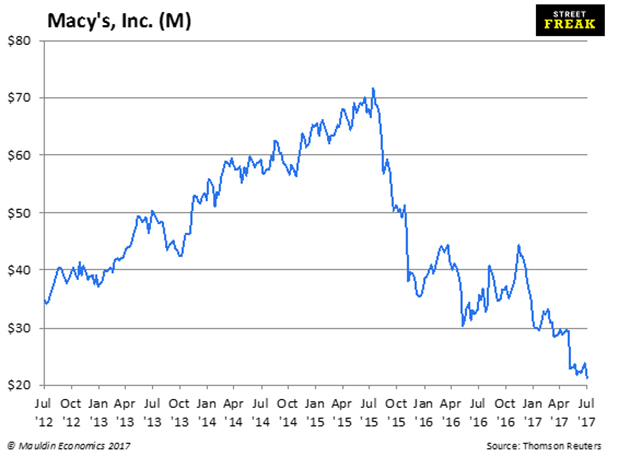 But look—at a $6.5 billion market cap, Macy’s is reaching distressed levels. That means we have to put our distressed investor hat on, pick this business apart, and see if there is value—in all parts of the capital structure. Maybe we don’t like the stock, but maybe we like the bonds, for example.

And, Staples was bought by private equity recently for about 0.4 times revenue. Apply that standard to Macy’s and you get to a $10 billion valuation. They’re still kicking.

Plus, there’s an argument that this whole Internet retailing thing is just a giant bubble, according to the chart below. 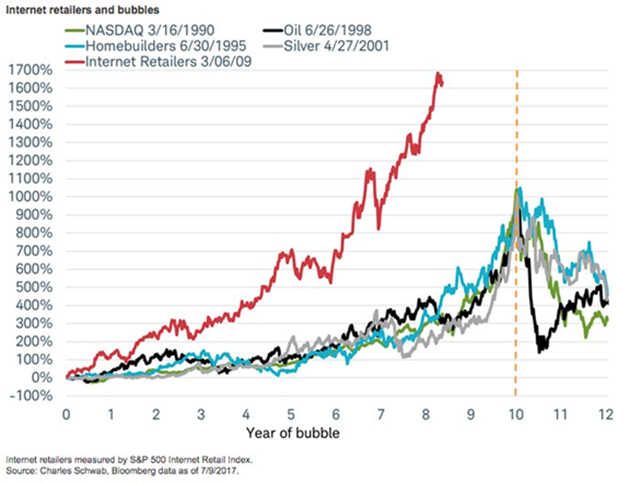 How Do You Play It?

This is a smart trade, but it is also a dangerous trade unless you are smart.

There are two ways to do this:

1) Be a distressed investor: Look at the worst-case scenario, look at all parts of the capital structure, and find value.

The worst way to play it is just to naively buy Macy’s (or another retailer) and hope for the best.

Furthermore, I think it’s time to go dumpster-diving in Mall REITs, which is what we’re going to do in the next issue of Street Freak.

Those are the best trades.

This is the best 10th man email I got!  Not just for presenting a quick 2 minute investment thesis, but how to do it.  Thanks Jared…your da man!

Actually, I think shorting this new double leveraged short bricks and mortar ETF could be an interesting idea. Face it - most of the time, the market isn’t strongly trending in either direction, and just slowly meanders up a little one day, down a little another. All double leveraged (or triple leveraged) ETFs tend to lose value in these markets, as the derivatives used to manage and leverage the daily price swings tend to suffer from time decay and other peculiarities of the math (if a stock goes from 100 to 102 one day, and back to 100 the next, and you own the stock for the two days, you break even - if you own a double leveraged ETF that owns a collection of such stocks and the collection goes up 2% one day, and back the next, you lose money). Its why shorting double leveraged volatility has been such a wonderful trade for the past few years. And you don’t need the malls / stores to do great - just not collapse as fast as the ETF buyers hoped for (and most bankruptcies / store closings are announced in Q1 anyway, so should be OK for a bit).

Trade off the half of the population that actually likes going shopping in brick and mortar with the fact that their credit cards are maxed out.

Also,  probably need to factor in the growing obesity epidemic that might cause a significant portion of that half to be happy to stay home and shop online.  Amazon is making the situation worse by constantly offering Lane Bryant gift cards at a discount,  a deadly trap for the other half of the population who is totally unaware of the ramifications.

Good article and I agree with your assessment. The articles touting the demise of retail were alongside another article this week that shows Dallas/Fort Worth retail occupancy is at an all time high. Let’s tap the brakes a little bit on the whole ‘death of retail’ narrative.