This must be the most overanalyzed election of all time, and I will be glad when it is over.

Five months ago, people thought that Biden would be bad for stocks, because, well, higher taxes. Which seemed reasonable—every other election in recent history had an effect on markets due to projected changes in tax policy.

Remember 2004? The stock market thought that John Kerry would raise taxes on dividends. When Bush won, dividend stocks were off to the races. 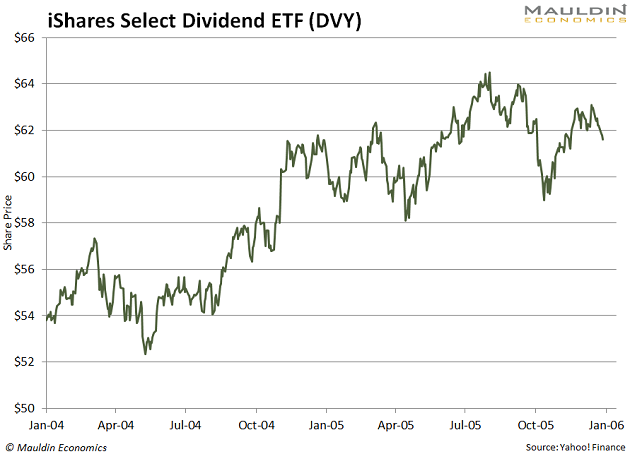 Today, people think that Biden will be good for stocks, because of stimulus and infrastructure spending. Everyone is talking about how a “blue wave” is good for stocks, having given up on the short thesis due to taxes.

This is the type of game theory that I used to enjoy but no longer do. As I told my Daily Dirtnap subscribers, we are going into this mostly unhedged. The hedges are all too expensive, anyway.

Nobody is going to get this right, either. Anyone who says they know with certainty what is going to happen is suffering from overconfidence or is a charlatan. Or both.

Maybe nothing happens! Maybe the stock market is unch after the election.

This is one of the reasons you want access to opportunities that only an elite group of investors are looking at, like the ones our VIP members get here at Mauldin Economics.

If Biden wins, taxes are going up.

Trump has said that he will lower taxes, but he’s offered no specifics.

The trend in tax policy is toward increasing progressivity, the idea that rich people pay more than poor people. The tax code has become increasingly progressive since 1988, when there were only two tax brackets:

My quibble with our current system of taxation is not the absolute level of rates; it’s the progressivity. And it’s not so much that people are paying a lot on the high end—it’s also that people aren’t paying very much on the low end.

As you travel around Europe, taxes are high, for sure. But on the low end, they are not especially low. Everyone pays. Everyone has skin in the game.

The problem is that, regardless of whether Biden or Trump wins, you can bet the tax code will become even more progressive.

This is bad for democracy.

Many years ago, Dennis Gartman observed that fewer and fewer people had any tax liability at all—a number approaching 50%. What would happen, he asked, if the people in the bottom 50% could vote higher taxes on the top 50%?

Although that’s not what’s happening—this election is split on income and education, but in reverse. Counterintuitively, people with lower incomes are not voting for higher taxes—it’s the people with higher incomes. It’s an urban legend that rich people tend to vote Republican—they really don’t, especially not now.

Biden Is Priced In

Whatever you believe about the accuracy of the polls, and people are a little gun-shy after 2016, I firmly believe that stocks are pricing in a Biden victory.

Look at the Invesco Solar ETF (TAN). It would not be shooting up if Trump were priced in. The fund is frontrunning a lot of spending on climate change initiatives, which Biden has pledged $2 trillion toward. 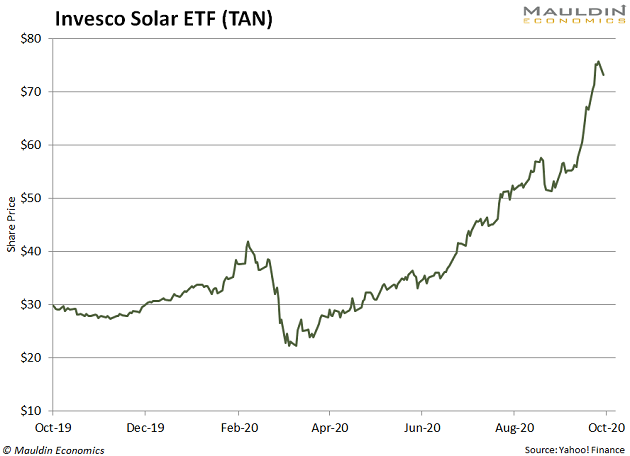 If Biden is priced in, and Biden wins, the stock market is unlikely to do much. In fact, there may be a “sell the news” event, which is usually what happens after everyone piles into a trade.

If Trump wins, it will take the market by surprise, much like what happened in 2016. And if the election is contested in any way, I doubt it will create much market turmoil, as everyone seems to be hedged for that possibility.

I’ve traded through five elections, and you cannot draw any generalizations from any of them. All you can do is plan for asymmetry in positioning.

Regardless of who wins the election, there’s always money to be made, and you can do that by betting right along with me and my colleagues…

We’re currently accepting new members to our elite VIP service at a ridiculously cheap 69% discount… but only for a limited window of time. VIP membership gives you comprehensive access to all 7 of Mauldin Economics’ premium investment newsletters, including my two monthly services, Street Freak and ETF 20/20—plus 5 VIP-only bonuses, 26 special reports, and more exclusive stuff. Get the details by clicking here.

I understand and agree with your article today ... we have been fortunate that stocks have generally increased through both types of administrations for decades.  But isn’t this one more about the Big Picture than what stocks are going to do… P. J. O’Rourke wrote in his “Parliament of Whores” ... “A democracy is not a permanent form of government.  It can only last until a majority of the electorate discovers it can vote itself largess from the public treasury.”  I’d say we are there and that is the most important issue of this election and the future of stocks.