Back about four months ago, I was forecasting a stock market crash, based on the idea that the electoral process would… break.

That idea spread rapidly throughout the hedge fund community, and lots of portfolio managers loaded up on S&P and VIX hedges.

Then I came to the realization that you cannot plan volatility. The thing about volatility is that it’s not on a calendar. Volatility only happens with surprises.

We had a big surprise back in March, when the coronavirus hit, and breathtaking volatility. But imagine if we had known that the virus was going to happen six months in advance. Everyone would have hedged, and eventually, those hedges would have to be unwound.

I no longer think that we will get a lot of volatility around the election. Instead, I think it is going to be a nonevent, from a stock market standpoint.

But from a bond market standpoint, it has the potential to be a surprise, and the market is just starting to figure that out.

Yields Are Backing Up

As the polls skew more and more toward Joe Biden, bond investors are looking at the possibility of a vastly enlarged supply under his administration. More spending, more taxing, and more borrowing. 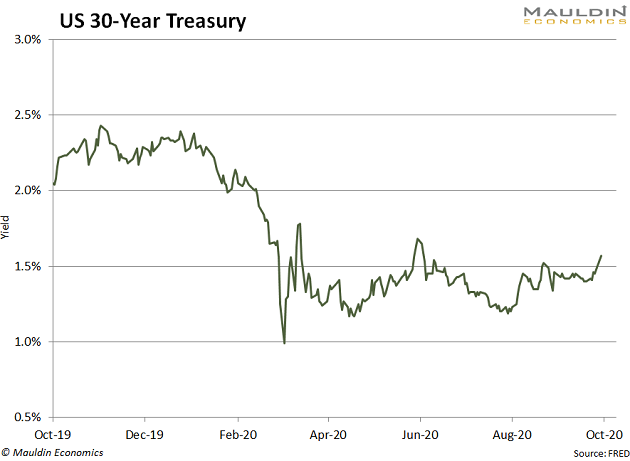 I’ve had a few discussions/arguments with people over the last month about the amount of spending that’s going to happen if Biden gets elected. I came up with $10T. Some people said that was bonkers. I’m not so sure.

I can easily see having a $4T infrastructure bill, $3T in stimulus, and some other pet projects. That quickly gets you to $10T. For reference, we have about $4T in revenues.

The bond market is a riddle, wrapped in a mystery, inside an enigma. There’s a limit to how high rates can go up, because the Fed is credibly threatening to cap yields.

Well, the Fed isn’t going to cap yields for a while. My guess is it’ll step in at 1.5% to 2% on tens. Bonds with low coupons have a lot of duration. That’s a big move. And here’s the point—on a Biden victory, the bond market could become very disorderly.

Theoretically, this is where The 10th Man adds value.

But stocks are going to be a waste of time. If there is any trade in stocks, it is probably short volatility.

Volatility is high—has been since the crisis. It’s part COVID-19, part election. But once the election passes, volatility could collapse—unless something really bizarre happens.

The election is kind of like an event horizon. We can’t see beyond it. But what if what’s beyond it is something better? And immediately—your mind goes to politics.

It’s been kind of interesting to watch the market creep higher as Biden’s lead increases. Stocks care about taxes. They care about corporate and income taxes, which would both go up under Biden, including taxes on capital gains and dividends.

Months ago, I thought that stocks would begin pricing this in. Hasn’t happened. It’s made me rethink my beliefs on taxes and markets.

If you really want to know what keeps me up at night about a Democratic administration, it’s not corporate taxes or income taxes, it’s financial transaction taxes.

As a former market-maker, I know how important liquidity is. If we enact a financial transactions tax, it’s a killer. It will become impossible to transfer risk in the markets of any size. We’ll poleax the economy and get nothing in return.

I talked about this recently on a podcast with the guys at IEX, the stock exchange that became famous in the whole Flash Boys controversy. I think it’s getting released today—the podcast is called Boxes + Lines.

We had a great discussion about how liquidity has deteriorated over the last 12 years. Unless you work in the markets, you have no idea how bad it is. The incentives to display liquidity have virtually disappeared.

This may be an example of where markets discount, but perhaps not enough.

The markets usually do what surprises people the most. And what would surprise people the most is if the election was a complete goat rodeo and stocks were “unch.”

Stocks always do what surprises people the most. If you haven’t learned that lesson after COVID-19, I’m not really sure what to tell you.

I’ll just mention that your conclusions around what would happen in a Biden administration are predicated on the Republicans losing the Senate.  He can’t simply implement what he and the Dems want to do.  Executive orders only go so far.

The probability of that eventuality took a hit in the last few days when the Democrat Senate candidate in my state, Cal Cunningham, pulled a John Edwards. and has become embroiled in a huge sex scandal.  Nice work Cal.  And as bad as our current GOP Senator is ... a RINO and a purely principle-free opportunist ... he will certainly be helped by this.  I don’t think most people who aren’t hard core partisans are willing to vote for a philanderer and someone with such obviously low personal integrity.

If I’m wrong on that, that’ll be a very sad commentary on where we stand as a nation.

Bottom line: If the Senate doesn’t flip, Biden winning doesn’t mean that much in terms if tax policy.  Infrastructure ... sure.  Bailouts and transfer payments ... sure, just not in the same dollar amounts.