So if you really want to ruin someone’s day, drive in the left lane at about 50 miles per hour. They will be grumpy for three days straight, I assure you.

He’s a guy who perhaps likes lots of rules to organize society, and perhaps he’d rather live in a world where some law governs how you conduct yourself in every aspect of your life, including how you drive. I tell you what, after growing up in Connecticut and then spending the last six years in the South, I’m enjoying the freedom, even if it means I occasionally get stuck behind some idiot.

These days I’m very skeptical of anyone who calls him- or herself a utopian, a person who subscribes to the idea that you can somehow nudge people into doing this or coerce them into doing that and create this ideal society where nothing bad ever happens.

Remember the movie Minority Report? You can create a world without crime, but what would that world look like? It would be horrifying. You can make the argument that there is actually an optimal level of crime. I would rather have a little crime than the oppressive law enforcement it would take to get zero crime.

Bill De Blasio recently lowered NYC speed limits to 25 miles per hour in an effort to lower traffic fatalities to zero. He called it Vision Zero. Have traffic fatalities been reduced? Actually, I haven’t checked. But there are tradeoffs with everything. People get to where they’re going much slower, which has an economic impact—that nobody talks about.

There have been some startling developments in the past few months. Like, did you hear the talk about getting rid of $100 bills?

It’s not just C-notes. 500EUR notes in Europe, 1,000CHF notes in Switzerland—everywhere people are talking about getting rid of large-denomination bills, because… some people use them to evade taxes or to commit crimes. You don’t pay your drug dealer with a credit card. So the thought is, get rid of the large-denomination bills and crime goes away.

This is scary. Part of economic freedom is the ability to transact anonymously. Take the extreme example where cash is eliminated altogether. Everything goes on a credit or debit card. Your whole purchasing history is stored on the Internet. Well, if you’re not doing anything wrong, you have nothing to hide, right?

Part of freedom (including economic freedom) is the ability to do bad things. Do you want to eliminate the option for people to do bad things, or do you want to give people the choice to do the right thing? All morality is meaningless if people are given no choice of whether to behave or misbehave. This is a deep philosophical issue.

But this talk about large-denomination bills is really gaining momentum, and honestly, I think it is at least half responsible for the run up in gold prices over the last couple of months. 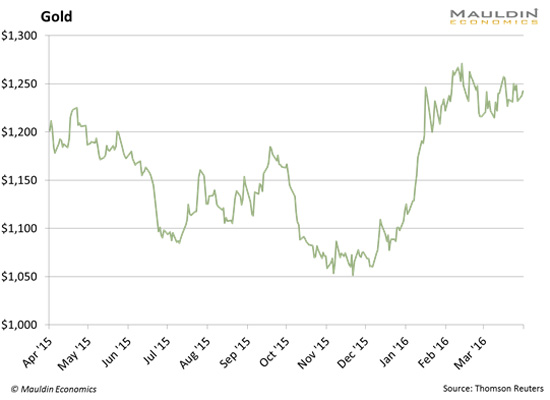 Think about it—in a world without cash, gold (and silver) becomes the currency of anonymity. You can see how this will play out: they ban cash, people start using gold… well, now we have to make it illegal to hold gold, because gold is the money of the underworld.

How much will gold be worth then?

This also speaks to the need to hold gold in physical form, not in “paper” form. I’m not one of these people who distrusts securitized gold or gold futures, but if it ever becomes illegal, holding ETFs or futures will do you no good whatsoever.

I read an article that all the anti-terrorism rules placed on the banking industry have turned out to be completely counterproductive. When dirty money was in the banking system, it could be tracked. Now that people have turned to cash and barter, it can’t be tracked, and we are actually less safe.

This trend toward pushing people outside the banking system is a very dangerous one. When people are underbanked, their social mobility is limited, to say the least. They work under the table, they don’t pay taxes, and they can’t contribute to Social Security. Whenever I make large deposits in my bank, it feels like I am going through airport security. Everything I do is viewed suspiciously.

The upshot here is that no matter how much social engineering you perform, you will never get people to behave, and the rules only make things worse for the people who actually obey them.

One of these days I will run for public office, maybe. I will campaign on a platform of doing nothing.

Agree with your comments, but equally significant is the government’s desire to make it difficult to put money under the mattress and earn “0%”, vs keeping it in banks earning negative rates.  Either way it’s all about control.  Agree that physical gold will be one of the densest stores of value and needs to be seriously considered by all serious investors.

Jared!  What a great article!  I have enjoyed reading your missives for a long time but this one is particularly good.  You see, it is the best argument for what God has done for us.  Look at “Choice” for example. You correctly show how there is no way to ever have a “perfect” world IF there is NO CHOICE.  Unless we have choice we are either slaves with no rights or dead with no ability.  Either way, unless we have choice we don’t have the ability to choose and without the ability to choose there would be no point in having choices.  However; we can choose any choice we want, but we will never be able to choose the consequences of our choices!  So without any choice and no consequences, we can’t learn and grow.  It is because we have choice that we compare the contrast of the results of our choices and grow from it.  Yes, that means people will make bad choices and reap the consequences of those choices, but that gives them impetus to learn from those consequences and it give me the opportunity to learn from watching what happens to them when they make good or bad choices.

You are right!  The more laws they make the worse things get.  The unintended consequences or more laws is never ending.  The more laws they make the more ways people will invent ways to work around those laws and the more laws will be issued to try to fix the unintended “whack-a-mole” problems they caused trying to control the uncontrollable. The only way our government will ever work is if people are willing to abide by the law.  Our government is only workable if the people are inclined to be law abiding people.  Sadly they are not for the most part anymore.