Not only did I work for a bank, I worked for a bank that just about took down the global financial system: Lehman Brothers.

Of course, I take pains to tell people that I wasn’t trading the CDOs and unicorn piss that just about took down the global financial system. Unfortunately, most people don’t have the ability to distinguish between ETFs and CDOs.

At this point, I am accustomed to playing the villain. But it didn’t start out this way.

Fifteen years ago, banks and bankers were held in pretty high regard. There was a big stock market bubble going on, and everyone was getting rich, or at least trying to. Unlike today, the bull market was fairly democratized, with plenty of people day trading or at least benefiting from the stock market rise passively through mutual funds.

Everyone wanted to work at a bank. The year I started at Lehman, they hired 300 MBAs globally. Today, they don’t even hire MBAs at all—just a handful of analysts out of college.

For a decade or more, Hollywood had portrayed bankers quite favorably. Edward Lewis in Pretty Woman was a corporate raider—and a human being, and a hero. Both Oliver Stone and Michael Lewis set out to discredit Wall Street—and ended up doing the opposite.

Back then, people liked Wall Street. It may seem hard to believe right now, but it’s true.

When I think back to the circumstances under which I was hired, I really didn’t know anything. I was a great student, got a 4.0 in B-school, learned a lot of book knowledge, but I really didn’t know anything about how markets worked. I really was less of a trader and more of a “finance worker,” someone who knew how to price things accurately, but wasn’t making any trigger-pulling decisions or security selection, at least not in the beginning. Just like factories need workers, banks need workers—and there is no moral significance to what they do.

My job was to arbitrage very small price discrepancies in S&P 500 and Nasdaq 100 futures. It was a job. Some people think bankers are bad people. There are bad people everywhere—they are not confined to banking. If you think they are, then you are very, very naïve.

It’s funny—people are going after Hillary Clinton for not releasing her transcripts from her speeches at ISIS, I mean, Goldman Sachs. I bet if you asked the people who are angry about these Goldman Sachs speeches if they knew what Goldman Sachs did or how they made their money, they would have no idea.

The Purpose of the Financial System

A bank is one of a number of financial intermediaries, like insurance companies1, pension funds, private equity, venture capital, hedge funds of all shapes and sizes, and so forth. A bank takes deposits and makes loans—that’s all there is to it. If you want to evaluate the investment merits of a bank, you look at how good they are at taking deposits and making loans.  Investment banks issue stocks and bonds and make secondary markets for those securities—nothing nefarious here.

I think the argument against banks in 2016 is that they will grow to the point where they will imperil the financial system and require taxpayer assistance if they become insolvent. Regulation is supposedly the answer to that, but it only seems to make the banks larger, which shouldn’t be difficult to understand—bigger banks have the resources to cope with the regulations.

People on the right and left (Kashkari and Sanders, respectively) want to break them apart, but I don’t see the point of a market intervention to offset previous failed market interventions. Besides, they broke up Ma Bell, and 20 years later, once again we ended up with… Ma Bell.

This is like Ronald Reagan/Milton Friedman classical liberalism, but if you really wanted to punish the banks, you would deregulate them and force them to compete with one another. Bad banks would go out of business, and new ones would spring up left and right. It would be a race to the bottom, and consumers would benefit.

I’ve started to get interested in banks because they’ve performed so poorly, and because it’s become quite consensus that they’re circling the drain. 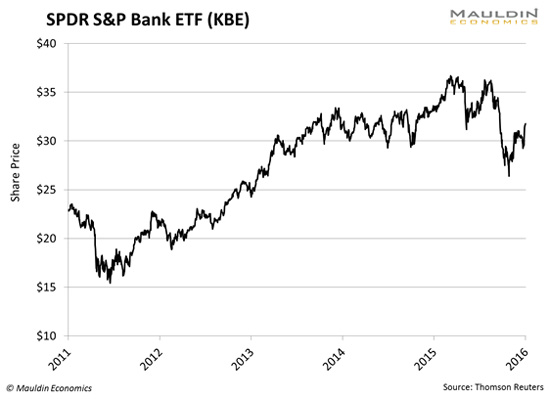 But this isn’t the worst-looking chart in the world. Now, some people say that the already overregulated banks are headed for a period of more regulation. Great! Regulation benefits scale players. Say that five times in a row. Pretty much anything the government does to the banks, outside of breaking them up, will actually have the effect of making the bank stocks go up.

Breaking up the banks is infeasible. It would be a 20-year legal morass to try to untangle every loan and every OTC derivative contract Citigroup has on the books. It’s great for politics, but practically impossible.

More interestingly, if you think that we are going to get a little inflation and that the yield curve might steepen instead of flattening further, then that would really help the banking industry. I think this is quite possible. 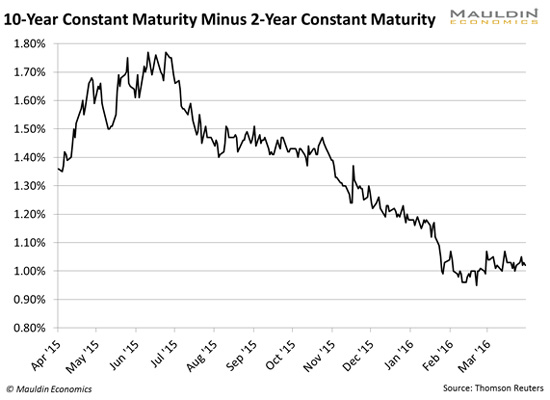 The last time I got involved with the banks was back in 2011, around Occupy Wall Street. I bought Bank of America purely because of the protests going on in Zuccotti Park. It was a great trade—I should have held on to it longer. I called it the “Occupy XLF” trade.

1 Funny about insurance companies. People think bank CEOs are rich because they make $20 million a year. Insurance CEOs—all billionaires, in an industry that probably adds a lot less value for consumers than banks do.

As an employee of Lehman, you are leaving out a touch of information when you indicate that “all the banks do is take in money to loan it out”.  If that was the extent of it, there would be little need for regulation.

WRT to the trade.  Buying banks, esp small community banks will be a great trade over the next several years.  There are hundreds of them that are trading at very low valuations with very low volatility and are ripe for takeovers.  They need to grow to handle the cost of the current regulations.