Very soon, I will be celebrating 20 years of marriage with my wife. This is a picture of us when we were 15 years old! 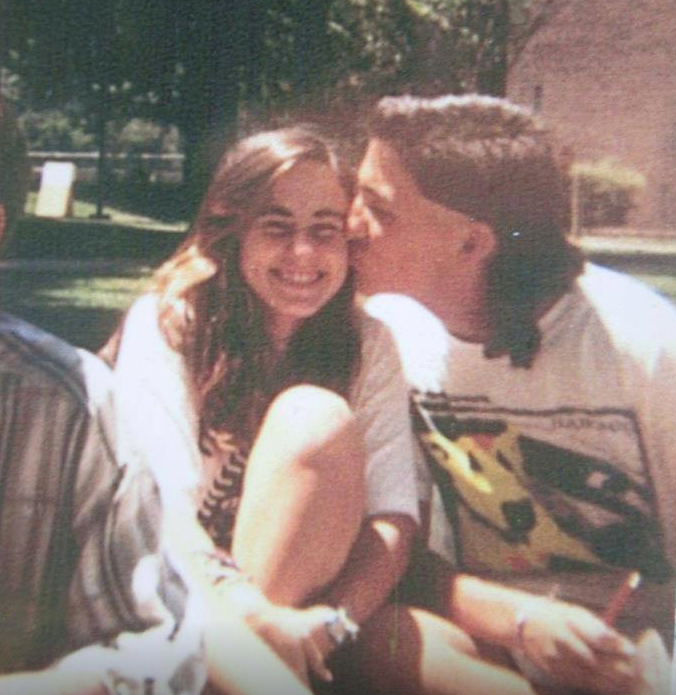 July 1989. Please note the business in the front and the party in the back, along with the negative sideburns. The height of 80s fashion!

This was at a gifted and talented summer camp. I had less success getting a girlfriend in my hometown—I was getting stuffed in a locker.

Actually, it wasn’t that bad. I had a pretty active social life as far as nerds go. Demented and sad, but social.

I’m sure some of my readers have read the controversial social scientist Charles Murray. Still more have probably heard what happened at Middlebury College in March, when student protests against his appearance at an event turned violent.

Years ago, Murray predicted that society would become stratified by intelligence, and that we would be ruled by a “cognitive elite.” All of this has come to pass.

Here are my reflections on 43 years of being on the periphery of that “cognitive elite.”

One of the reasons I am where I am today is because I did not study hard in school.

I was barely in the top ten percent of my high school class. I probably could have been number one, but I was too busy screwing around.

I once started an underground newspaper (which was probably the predecessor to The Daily Dirtnap).

I intentionally flunked physics my senior year, because I disliked the teacher.

Clearly, I did not have a great deal of maturity. My test scores were very high, but my options were limited since my grades weren’t very good.

Yes, I went to the Coast Guard Academy, which is a good school. But it’s not a great school, despite being a selective school.

There is a difference.

Most of my classmates at gifted and talented camp (which counts among its alumni Mark Zuckerberg, Sergey Brin, and Lady Gaga) went on to Ivy League schools, where they became part of the cognitive elite.

They now have careers in academia, journalism, finance, technology, even politics. As forty-somethings, they are the ones running the country. One of my very good friends from gifted and talented camp is probably a billionaire.

Rewind to a few decades ago. Colleges suddenly became more meritocratic, admitting people on the basis of grades and test scores, instead of other criteria.

The results of that sociology experiment are fascinating: the smart people in smart schools started marrying each other and having smart children…

Those smart children got into the smart schools…

And it set off a self-reinforcing cycle that continues to this day.

The funny thing about Americans is that though we’re very careful about racism, we are actually a very classist society. Implicit in the assertion that “you don’t have any money” is the judgment that “you make poor decisions.”

People don’t talk about this. We are obsessed with racism, but people of differing socioeconomic status just do not mix.

This all came to a head in the 2016 election, where we threw out the smart people in academia and journalism and finance and technology and politics—the so-called “experts.”

As for my wife and I, we have reached an evolutionary dead end (no children), but we were one of the first, if not the first alumni of that gifted and talented camp to go on to get married. We singlehandedly started the cognitive sorting machine.

I worked on Wall Street in the 2000s. That was an interesting time—on the trading floor, you had a mix of propellerheads like me, and lax bros from places like Cornell. Ah, there was a lot of lacrosse back then.

But things were changing. During the associate training program, they announced the average GMAT score for the class. I was average! I was accustomed to gifted and talented camps, but didn’t expect to end up working at one.

Funny thing is, if you look across a trading floor nowadays, there are almost no lax bros.

There are almost no people.

The traders are gradually being replaced by quantitative analysts.

Most cash equity desks at the big banks are staffed by almost no one, except for a central order book—a matching engine that pairs off firm and customer order flow. A robot, built by very smart people.

Not long ago, Bloomberg posted an article about Renaissance Technologies, the most successful hedge fund in history. I referenced it here. All quants.

Any coincidence that the top hedge fund in the world is run by the smartest people, the top math and physics PhDs in the world?

In case you had any doubt about the correlation between intelligence and investment success.

There are two structural trends present in today’s markets:

There is a limit to how far 1) can go… but 2) is going to continue forever.

So the formation of a cognitive elite is happening in finance, too. And with similar consequences.

There is a bit of a rebellion against the quants—carping that non-traders don’t have the same eye for market history, liquidity, etc.

Well, the quant funds seem to blow up less than the discretionary funds do. But we’ll see. There are a lot of systematic strategies out there selling a lot of options.

It might seem like a good idea having all the smart people make all the decisions. Common sense, actually.

Mark Zuckerberg, who is probably going to run for president, made a splash in his Harvard commencement speech when he called for a universal basic income. But I don’t think you’re doing anyone any favors when you give them free money to sit at home and play Xbox.

Actually, I did some writing on Facebook (and Google, and Amazon) in The Daily Dirtnap back in 2013/2014. I called them gifted and talented camps.

I said that it is no fun shorting stocks that are gifted and talented camps—companies whose sole purpose is to hire the smartest people and turn them loose to solve hard problems.

That turned out to be even more prescient than I expected.

Cognitive stratification is not stopping any time soon. Cities will get richer, towns will get poorer, a handful of companies will get even more powerful.

If you feel like you don’t have a say in any of this… that will probably continue.

I wonder about what it will be like to live in a world ruled by people who have won the genetic lottery.