I might have the DVD. I can’t remember. I need to watch it again.

A Hackers remake would almost certainly involve bitcoin. And maybe some different clothes. 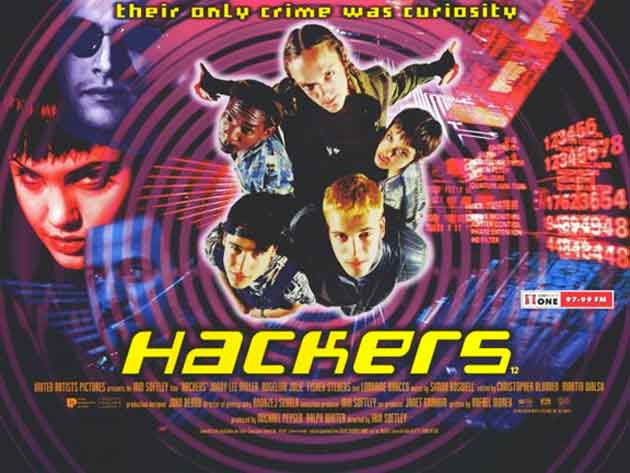 Right before I sat down to write this 10th Man, I read a New York Times article about how people are getting their identities stolen via their phone number.

The one thing all these people had in common? They were vocal on social media about investing in bitcoin. They got hacked—and their bitcoins disappeared. In some cases, seven figures’ worth.

I thought the whole point of bitcoin was security, right?

There are a lot of facets to bitcoin.

I tweeted out The New York Times article, and then somebody quote-tweeted me: 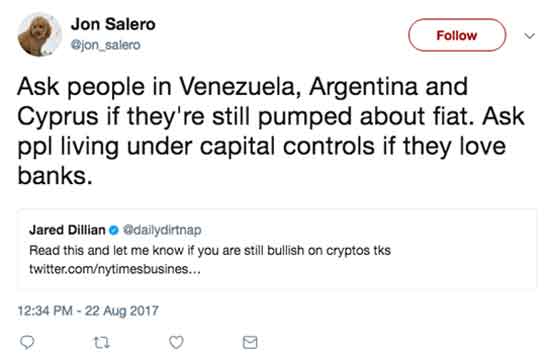 Would bitcoin have solved your problems? Possibly.

Certainly in Cyprus’ case, other things would have solved your problems, too—like gold!

Admittedly, gold may be no help in Venezuela because the rule of law has broken down and there is no way to defend it. So yes, in Venezuela, bitcoin may have helped.

You know what else would have helped? Getting out of the country! If you are sitting in Venezuela with all your bitcoin, you are still pretty unhappy. It sucks there.

People spend a lot of time trying to figure out how to protect their wealth from inflation, expropriation, and so on. There are a million ways to skin this cat… piles of cash, gold, diamonds, jewelry, other hard assets, and now bitcoin.

The main advantage of bitcoin is that you can easily move money across national borders. Try doing that with cash. Bitcoin just sits in your digital wallet, and when you settle in your new country, you sell it and convert it into currency. Theoretically, you could move your entire liquid net worth in this fashion.

It’s an open secret that Chinese people have been busy smurfing as much wealth as they can out of the country with bitcoin. I bet that if China could figure out a way to stop it, they would.

But let’s talk about the disadvantages.

So far in bitcoin’s short history, we’ve had an exchange get hacked, and widespread hacking of digital wallets. You could protect your bitcoin by having a “hardware wallet,” an external hard drive that’s not connected to the web, but that kind of defeats the purpose. You’re then no better off than you were with gold.

Not to mention the fact that bitcoin is used for a lot of shady stuff, like trafficking of all manner of contraband on the dark web. Hey, I’m all for personal liberty and anonymous financial transactions, but as my grandmother used to say, “you lay down with dogs, you get fleas.”

You might remember discussions from a year or two ago about how Larry Summers (and others) want to eliminate cash, because cash facilitates criminal activity. Yes, it does—but nowhere near to the extent of bitcoin!

Which is why, one day, bitcoin will be made illegal.

A bitcoin enthusiast will say making it illegal doesn’t really do anything. The government can’t stop bitcoin.

This is true with lots of things, like drugs. Drugs are everywhere, but they are still illegal. Once you make something illegal, you drive it underground, and you delegitimize it.

So while it would be exceedingly rare for anyone to be caught and prosecuted for using illegal bitcoin, dreams of it becoming an “alternate currency” would be shattered. Then it really would only be for criminals.

None of this sounds like anything I want to be a part of. The government can ban gold, but I can’t see the federal government going door-to-door and searching for gold like they did in the 1930s.

And besides… before it even got to that point, you should have left the country!

The foolproof way to protect your wealth is to leave for a jurisdiction that will treat it with more respect. There were reports that the number of people renouncing their citizenship increased under Obama. It will be interesting to see what happens under Trump.

The point is to get out before the walls go up. That’s unlikely to happen in the United States, with its stable democracy and strong institutions. But it never hurts to be a little paranoid—Venezuela only took a couple of decades to go from stable democracy to communist basket case.

Back in the 2000s, I had a thing for Greece. I watched The Bourne Identity, and at the end of the movie, Matt Damon finds Franka Potente renting bicycles on some remote Greek island, completely off the grid.

That sounded pretty attractive to me. I even remember looking up some Greek real estate at my desk at Lehman Brothers. It was 2003. Bear markets make you think of some crazy stuff.

Because bitcoin is the biggest facilitator of money laundering and tax evasion, crypto is on a collision course with the major sovereigns, soon.  Right now as I type this, behind the curtain they are readying “reforms” with full international cooperation and extremely harsh penalties for non-compliance.  Governments are desperate for money and control, and crypto is an enemy, so until governments lose control, it’s best to stash wealth you cannot afford to lose into other vehicles.

Great article, I immediately removed my phone number from my coinbase account.

I didn’t know about this issue beforehand, and can’t believe how vulnerable cryptocurrencies and other accounts were. Security of my funds and data left up to the pure discretion of a phone company agent? How long till the thieves start bribing agents?