Interest rates are structurally set up to go higher. I mean, it is kind of hard to argue that rates will go lower when inflation is ripping 1% higher every two months.

And yet, in the short term, I think interest rates will go lower.

I used to teach finance at the university level (and will again), and the textbooks tell you that interest rates are a result of the intersection of supply and demand for loanable funds. This is a pretty good model, although it doesn’t explain everything. For example, back in the early 2010s, there was a huge amount of investment required for fracking. The energy industry borrowed hundreds of billions of dollars, which was a big demand for loanable funds, and it pushed interest rates up. Or you could consider the “wall of savings” that Boomers had, which represented a huge supply of loanable funds that pushed interest rates down.

So where are we now? Well, the economy is running hot, housing and automobile prices are skyrocketing, and people are borrowing huge amounts of money, driving up interest rates. And maybe the turn in demographics is here—maybe the Boomers are dissaving and selling stocks and bonds.

My thesis is that inflation, inflationary psychology, or whatever you want to call it, has triggered an excess demand for loanable funds.

Now, that doesn’t do much to explain something like skyrocketing mortgage rates, or does it? Here’s a nice chart: 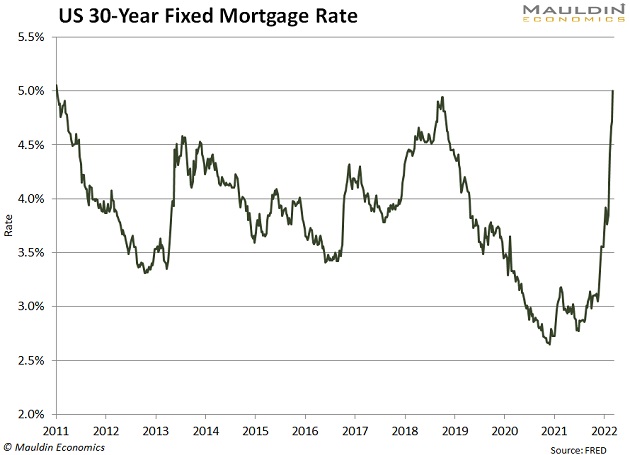 But the trader in me says rates have jumped too far, too fast. I am a bit of a mean reversion guy, and I think rate expectations have gotten a little out of control. Plus, when nominal rates increase dramatically, it brings out buyers of bonds. Ten-year notes at 3% look pretty attractive to some people, even if real rates are still negative.

So yes, I am expecting a big rally in bonds sometime over the next month or two. It could take a lot of people by surprise.


But as I said, rates are going to be structurally higher. First of all, the biggest paradox in the investing world is that inflation is 8.5% and nominal rates are below 3%. Yes, negative real rates have been with us at various points in history, but never to this degree. I do believe that will resolve itself over time, pushing interest rates significantly higher than where they are today.

A lot of people ask, well, what about the housing market? It’s getting to the point where affordability is very poor, and I have seen some charts showing homebuying intentions going down the toilet. But 5% mortgage rates in and of themselves are not going to kill the housing market—that would take much higher interest rates. My first mortgage, in 1999, was 7.25%. Didn’t feel like too much of a stretch to me. Of course, I bought the property for $175,000, so the payment was pretty manageable. By the way, I looked up that house recently, and it’s now worth around $600,000.

A lot of people have forgotten what high interest rates are like. It makes you think long and hard before committing a bunch of capital to a large purchase. Car loan rates will go up as well—at the worst possible time, when cars are as unaffordable as ever. At the moment, consumer confidence is very low, in spite of the labor market being as tight as ever. I predict that we’ll have an unemployment rate in the 2 handle sometime before the end of the year.

Since I’m doing predictions, I also think inflation will reach 10% or more sometime before the end of the year.

What is remarkable about all of this is how fast it happened. If you asked me in 2016, I would have said we would get inflation, but that it would inch higher over the course of a decade. I didn’t think it would go from 0 to 10 in a year.

I think the lesson here is that you should not screw around with the economy, because when you intervene in a complex system that you don’t fully understand, you cause enormous unintended consequences. The Fed aside (and there is plenty of blame to go around there), our fiscal response to the pandemic was a huge overreaction, and we were doing stimulus all the way until 2021, long after it was necessary. Now we are hearing of places like California doing stimulus to offset the effects of inflation. This is really a bad sign. When people were talking about hyperinflation in 2011, they were dismissed as cranks. Now people are taking it seriously. They were just early, I guess.

I don’t think there were any 10th Man readers at the party two weeks ago—too bad, you missed out on something special. Here is the music—just imagine it being played on a monster sound system.