My mom called me up the other day and asked for a TV for her birthday. She wants a small 24-inch TV that she can put next to the treadmill.

Ninety-nine bucks for a TV. I am not sure who is making money off a $99 TV. That’s incredible.

And that’s the miracle of capitalism in action…

If the government stays out of the way and does not regulate the manufacture of TVs, prices will decline over time.

BLS does this thing called hedonic adjustments. That's where the inflation bean counters take into account the quality differences in a TV as well as the price.

Not only has the price gone down, but the quality has improved. According to the BLS, that means the price has gone down even more.

This is one way in which we systematically undercount inflation. There are other ways, but this is the biggest, at least when you’re talking about the Consumer Price Index (CPI).

Critics of hedonic adjustments say that you still have to buy a TV and you’re not getting it for 99% off. A TV is a TV.

Of course, TVs are an example where prices have declined over the years.

In healthcare and education, prices have risen, proportional to the amount of government involvement. Years ago, there was a chart going around that showed how the prices of certain goods and services had trended over the past few decades. 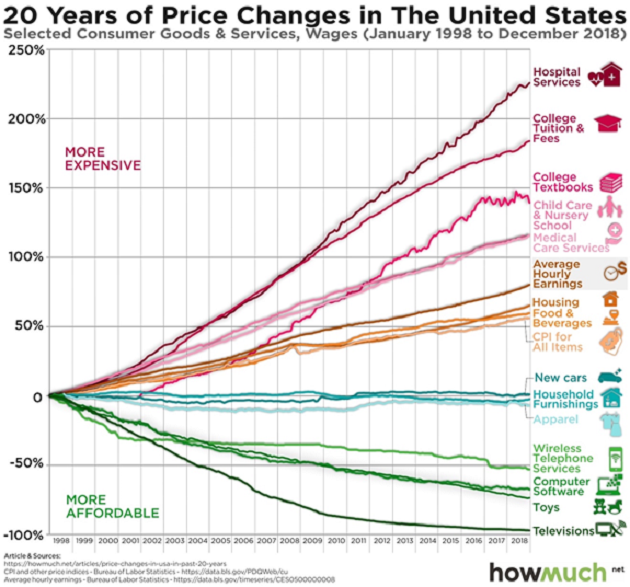 In places where entrepreneurs were free to innovate, prices declined the most.

Inflation is very complicated. Most macro thinkers, like I suspect you might be, look at inflation in purely monetarist terms: the supply of money and the increased supply of dollars chasing the same amount of goods.

It’s said that 35% of all dollars in existence were created in the past 10 months. Common sense would tell you that would cause inflation.

Left-wingers, generally speaking, look at the current level of inflation, which is about 2%, and say that the relationship between money supply and inflation has broken down. Milton Friedman was wrong.

Maybe not—where would inflation be in the absence of all the printing?

People have saved quite a bit of money during the pandemic. Once it’s over, and people begin spending again, inflation is likely to rise.

But maybe not! Technological improvements result in falling prices, but so do demographics. As the population ages, we can expect inflation to fall even further.

It is difficult to arrest a trend in inflation or deflation once it is in motion.

But Have You Seen Commodities?

Check out this chart of corn prices, for example: 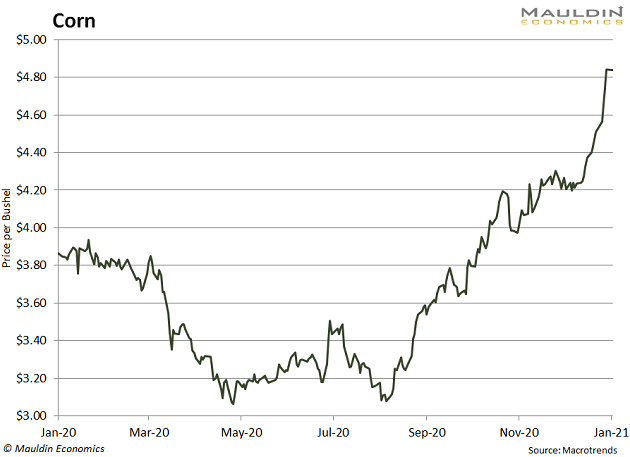 This looks like a lot of commodity charts out there right now, going from the lower left to the upper right, whether it’s agriculture, energy, metals, or soft commodities. By the way, the next time you are in the grocery store, take a look around—pretty much half the goods in the store are made of corn.

Of course, in the context of a long-term chart in commodities, what we experienced in 2020 is just a blip: 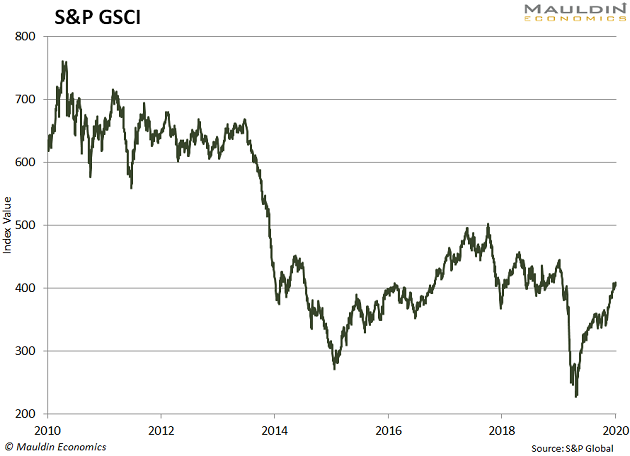 Which leads me to believe that commodity prices have a lot further to run.

We’ve handed out a lot of money in the last year: PPP loans, enhanced unemployment benefits, and stimulus checks. Sooner or later, this is going to find its way into the economy… right about the time that states start to ease their pandemic restrictions. This is independent of whatever the Fed does or doesn’t do.

The charts are already moving—by the time it shows up in the official statistics, it will be too late. There’s no need to run out and buy 20 bags of fertilizer at the moment, and I certainly hope that isn’t in our future.

Either way, stay tuned and I'll show you how to play it.

The Top Consensus Trades of 2021

5 Investments to Volatility-Proof Your Portfolio