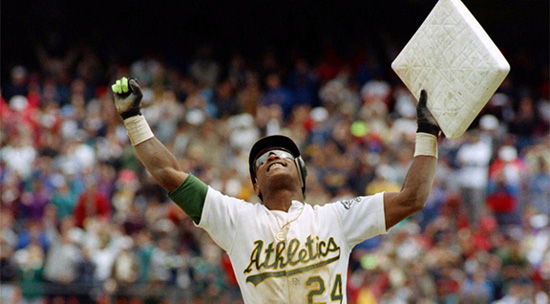 Rickey Henderson never suffered from a lack of confidence. I’m sure if you asked him, he’d tell you that he could still play baseball and steal 50 bases a year.

I also remember the anecdote about Lenny Dykstra from Moneyball. A young Billy Beane was sitting with Dykstra in the dugout, watching Steve Carlton warm up. Dykstra said to Beane, “Who is that old man? I’m going to stick him.”

Beane replied, “Lenny, that’s Steve Carlton, one of the greatest pitchers ever. He’s number two on the all-time strikeout list.”

I think baseball perhaps is one endeavor where you can never have too much confidence. Same with a lot of things in life. In investing, not the case. You need to have a healthy dose of skepticism in your own abilities.

Trump obviously does not suffer from a lack of confidence. Nate Silver didn’t, either.

The well-known statistician predicted early and often that Trump wouldn’t last long in the Republican presidential race. And he wasn’t alone: a lot of people said Trump would flame out over time. Pretty much everyone was saying it.

What distinguished Nate Silver from everyone else was the confidence with which he was saying it. He was all but guaranteeing it. He operates in a world filled with mathematical models that had never before failed him. Then they failed him.

When you deal with large quantities of money, you try not to say things like “This absolutely, positively cannot happen.” Because anything can happen. It’s just a matter of measuring the probability, no matter how remote.

There is no such thing as a sure thing.

But people outside of finance often don’t understand that. They go through life with a level of certainty that people like us just don’t have.

Trading makes you really humble. You’re wrong a lot, and you have to admit that you’re wrong, or you will get carried out.

Typically, people get into trouble with overconfidence when they find themselves in a trade they feel strongly about and it progressively goes against them, day after day after day. So they double and triple down and keep adding to the position.

This is not a mistake professionals make. This is an amateur mistake, to forget your discipline like that. Pure ego. “I know better than the market.”

The problem (for all of us) is that people in positions of power almost never have any experience with finance or math or probability and suffer from a great deal of overconfidence. They make an error and refuse to admit they are wrong, so they compound the error. You see this played out over and over again in American politics.

In The Daily Dirtnap, I recently asked my subscribers if they could think of a trader who went on to occupy a position of authority, because I couldn’t think of any.

They thought of one! Jon Corzine. But his undoing at MF Global was because of… you guessed it—overconfidence!

Zero Hedge’s tagline is, “On a long enough timeline, the survival rate for everyone drops to zero.” Of course that is a Fight Club quote, but it applies here. Eventually, given enough time, everyone will suffer from overconfidence and blow him- or herself up.

You will find that the investors who last into their seventies and eighties are very boring, cautious people. Not the types of folks that make triple-digit returns.

A Complete Lack of Introspection

Politics aside, when I look at potential leaders, I like to look at how introspective people are, their awareness of themselves, their strengths and shortcomings.

I try to imagine XYZ presidential candidate in a position where they have to admit that they’re wrong. Can they do it?

It’s one thing to do it as a trader, when lots of money is at stake. But what if you are president—and lives are at stake?

Otherwise, they are in the position where they have committed an error and continue to compound the error, doubling down, with possibly grievous consequences.

Of course, this quality isn’t often found in presidential candidates, because you need the confidence of a Rickey Henderson to run for president. You have to be that insane.

This cycle, we have a slate of candidates who appear to be fully convinced of their own infallibility. I think the problem is more acute than in previous years. You might confuse overconfidence with strength this time around, but that is an error you won’t make twice, I assure you.

All True….as for Trump?  As he steamrolls his way to a Presidential nomination and perhaps the Presidency itself, we can only hope that he is fully aware of the caricature he is and that he plays to.  Perhaps, behind closed doors, he drops the charade and has humility.  Some who know him well suggest at that.  His family seems committed to him which is a good sign.  We will just need to wait and see.

Sadly Ricky Henderson was a predictable boor but one heck off of a baseball player. Where as the Trump has now become a predictable boor and has for sometime been a deluded Demagogue but never a competent integrus leader. Mitt Romney on the other hand is head and shoulders above everyone of the Republicans nominees. We saw a perfect display of his superior competence in Utah toady. The speech he gave today absolutely shreded Trump with scathing accuracy. It Completely demolished him. It was a thing of beauty..Now if Rubio and Cruz can do half as good a job as Romney, Trump will not be the Republican heir apparent. If they don’t and he is. Hillary will be our next President in a landslide victory…

It is not the effect Trump’s “overconfidence” that makes him appealing.  His appeal is from what he says we will do for America and the American people - starting with putting their best interests in front of every decision. What a novel idea for a democratic republic.