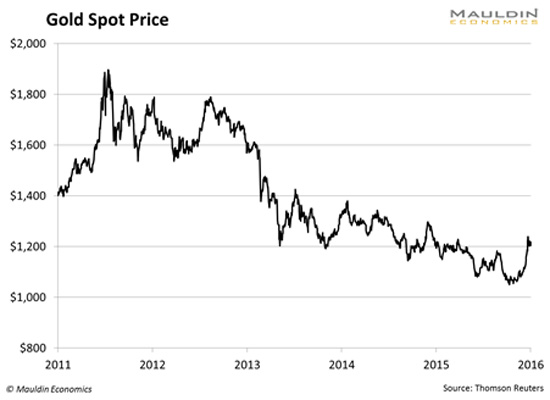 This is the most magnificent chart in all of the capital markets right now. There is no arguing that. The deflationists/gold haters can argue about the investment merits of gold until the cows come home, but there is no arguing with that chart. Which explains some of the gold haters’ silence.

People are buying upside calls for the first time in forever. The old call skew—where call options are more expensive than put options—is coming back. They are selling puts to buy calls (risk reversals) and call spreads (call spread collars). Just about every bullish options structure is being put on in gold.

There was a parabolic move up to 1,250, and now it is consolidating.

There will be another parabolic move soon, probably up to 1,400.

That is the technical case. Let me lay out the fundamental case.

First you had zero interest rates.

Then you had quantitative easing.

Now you have negative interest rates.

The central banks are finding it difficult to implement negative rates because people hoard cash. The Japanese are buying safes to store it all.

Of course, the government can eliminate high-denomination bills (as Larry Summers wants to do with the $100 bill) or even make it illegal to hold cash, so that NIRP can be implemented successfully.

There is a larger discussion here about economic freedom and privacy and anonymity, but I’ll save that for another time.

Like I said, the authorities are finding it difficult to implement negative rates (the Swiss are hoarding CHF1,000 notes to avoid -0.75% interest rates), so people are quite openly speculating about the possibility of OMT—outright monetary transactions.

There was an article in the UK Telegraph about it here. I suggest you read it and then pick up here where you left off.

So like I said, we have lost our minds. We’ve gone cuckoo for Cocoa Puffs. Seriously. If it were 1996 and I told you we were considering just handing out free money in 2016, you would have taken a swing at me. But here we are, talking about it.

There are a couple of reasons why this absolute lunacy is being considered a serious possibility:

If you asked a second-grader what would happen if you suddenly printed money and put it in people’s bank accounts, they would be able to give you the correct answer: Prices are going up. Duh. Yet a bunch of PhDs think it’s a brilliant idea.

Don’t let a bunch of PhDs ever run anything. Ever. Let alone the global economy.

So yes, I predict that this is going to happen. I think it is going to happen in Japan first, then elsewhere. Will it happen in the United States? I think it would take a lot. We still have a Fed that is reasonably hawkish on inflation. I’m sure Evans and maybe Rosengren would think it were a good idea, but I’d say the FOMC is far from having consensus on this particular issue.

We are going to have OMT. Probably in the next year, it is going to happen somewhere in the world.

The trade is easy. Gold!

Some people are already starting to think about downside in the bond market, putting on steepeners, etc. When inflation strikes, it will hit the long end of the yield curve. I think that might be premature. Don’t get me wrong—OMT will probably result in the bond market going down in flames, but I would be surprised if that happened in 2016.

You probably have noticed that newsletter writers are seldom this explicit when it comes to trade ideas. I will cop to that. I am usually unwilling to really stick my neck out on a marginal idea.

I am more sure about this one. We spent five years contemplating tighter monetary policy (but not actually doing it, except for 25 bps at the end). Notice all the rate hike talk is pretty much over.

Two-thirds of investing is getting ahead of dumb policy. Free stuff—this is the easiest one in the world.

[Ed. Note: The author is long GLD and physical gold.]

Before I leave, I should remind you that today is the last day where you can get the Mauldin 3-for-1 Bundle (Street Freak, Yield Shark, and Over My Shoulder) for just $199. You save 75%, which I would say is a pretty good deal, so you might want to look into it.