Think back to 2011, when you would see gold commercials on Fox News. Goldline, Lear Capital, Rosland Capital.

The sales pitch was the same: Protect your wealth. And you see a lot of pitches like that in your inbox, I bet.

Difference is, this time it’s real.

Paraphrasing Luke Gromen, the Fed lends to the US government at zero percent, and the US government hands money to citizens. One of these days we are going to cut out the middleman. We haven’t crossed that Rubicon yet, but we might someday.

In November, we will have a choice between fiscally insane and completely fiscally bonkers. If there are any fiscally conservative politicians left, they’re not speaking up.

There are no brakes on this train. At the end of the track is pure Modern Monetary Theory (MMT).

The old-timers know—when this stuff happens, you have an honest-to-goodness inflation trade in the markets. There’s no doubt about what it is. And the inflation statistics are already beating expectations—in the middle of what should be a deflationary shock.

People have been confidently predicting deflation for years. They have missed the turn.

The good news is that this creates gigantic opportunities for investors. It already has, and there will be more—look for an email from me tomorrow with more specifics.

Only 10% of the Population Can Afford a New Car

My first car was a brown Pontiac 1000 that I inherited from my grandmother who passed away in 1989. It was essentially a Chevette. I don’t remember exactly how much it cost, but it was probably around $5,000.

My second car was a white 1995 Toyota Tercel that I bought with a USAA car loan. My first new car—I liked that the doors went “snick” instead of “clang.” The car cost around $12,000, which was a lot of money for a 21-year-old. I spent the next five years paying it off.

My third car was a green 2004 Toyota Camry that I paid cash for with my wife. It was an impulse purchase. We figured we would go check out some cars, and we ended up buying one. Funny how that happens. I think it cost around $23,000.

The fifth car was another black Highlander, 2017 this time, that I bought through a local dealership. It cost $40,000.

The average price of a new car in the United States is about $38,000. Only 10% of the population can afford that.

Now, cars are expensive for a bunch of reasons. First, the government has imposed more safety requirements over the years. Second, it has increased fuel efficiency requirements. This is an example of inflation by fiat—businesses pass along the cost of complying with laws and regulations to consumers.

If you want to look at something more immediate, food prices have skyrocketed in the last few months. Meat and poultry have jumped 11%, with beef and veal prices spiking 20%. Pork has jumped 8%. Egg prices, 11%. I’m sure nobody will freak out about this.

But there is also plain old monetary inflation. Inflation has been low the last 20 years, but it hasn’t been zero, either.

The problem is that incomes have barely gone up at all.

And that is what we are going to see more of—wealthy people with the ability and means to protect themselves from inflation, and low-income people who are crushed by it. Inflation is an inequality machine.

The Cause of Everything Wrong with the World

We have seen some incredible charts of plummeting real interest rates in recent weeks, which are now deeply negative. 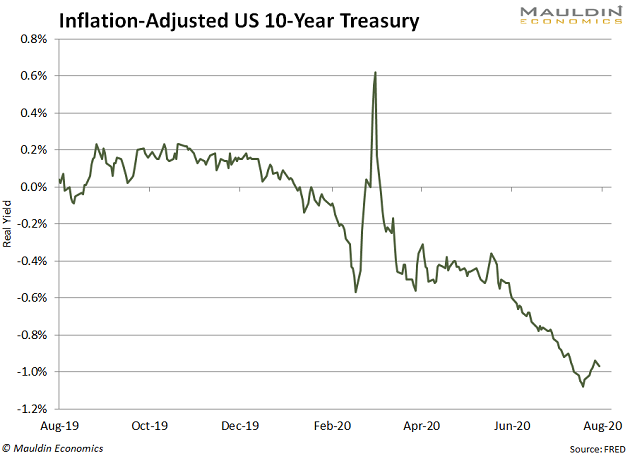 Negative real interest rates are the cause of everything that is wrong with the world.

When I first came into the business 21 years ago, the dollar was strong, and interest rates were high. Financial conditions were tight. This meant that companies had to be very disciplined in order to sell goods overseas and meet debt service costs.

Now, financial conditions are very loose, and corporations are flabby.

I am starting to think that this is the rule, rather than the exception. Can you imagine a Treasury Secretary today saying that he or she was pursuing a strong dollar policy? Can you imagine Jay Powell raising interest rates to 3%?

When Bernie Sanders goes on and on about billionaires making all this money during the crisis, it’s as if he’s never heard of the Federal Reserve.

If you don’t take the pain now, there is going to be more pain later.

One thing I find interesting about human beings is that we can see trends developing and extrapolate them pretty far out in the future. Forecasting is not so difficult.

From a fiscal and monetary standpoint, the election is more or less irrelevant. We’re on a path to financial destruction, and one outcome will get us there a little faster than the other.

I’ve been writing about inflation a lot in recent weeks, and I’ll shut up for now. Then again, you’ll hear from me tomorrow with more details about the gigantic opportunities I’ve mentioned. That’s the only fun part of this story—so, check your inbox.

For now, just know that if tech and financialization were the two big trends from the last 20 years, inflation will be the big trend of the next 20.

If we last that long.

Jared you missed one guy when you said there are not any fiscal conservative politicians anymore. Ron Paul has been talking about these issues for what seems like a couple of decades. I know he might not qualify as a politician since he is no longer in office but his son Rand the senator from Kentucky has also ripped on Congress for their ridiculous spending and questioned the actions of the fed but of course just like his father nobody listens.