Last week, I shared a short list of things I’ve traded through:

Now, you might look at that list of events and say, “Whew! I missed all those. Dodged a bullet.” But instead of thinking about loss avoidance, you should think about opportunity cost. These weren’t ways to lose money, they were opportunities to make money.

When I look at that list, I don’t feel happy, I feel sad. Can you imagine being on the right side of the CHF reval? A hero trade.

EURUSD has moved 12 cents, give or take, in the last couple of months. This is a multi-standard deviation move, and an opportunity that doesn’t come along in the FX space much these days—especially these days. 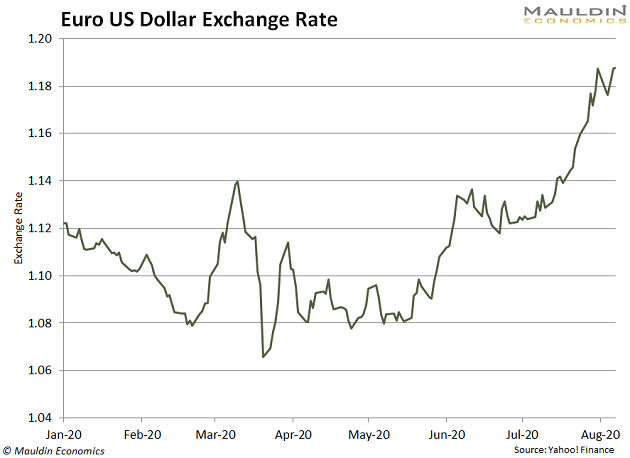 I want to focus on the dollar specifically for a second, because I believe there has been a sea change in macro investing in the last few months. We have moved from a disinflationary regime to an inflationary regime. Everything that worked in the past, will no longer work.

The whole framework with which we analyze the macro environment has changed—and most people haven’t even noticed. They’re still fighting the last war.

You might say, why is it different this time? We printed a bunch of money back in 2008, and we never got inflation. We got asset price inflation, but we didn’t get inflation in goods and services. Stocks and bonds went up.

This time we will get inflation—because we are intervening on the fiscal side.

This is how you get money velocity going—by spending trillions of dollars and simply handing it out to people who have a greater marginal propensity to consume.

The PPP loans, the stimulus checks, and the unemployment cash have been rapidly deployed into the economy. This is not 2008, where cash from quantitative easing was held at the Fed in the form of excess reserves. This money is being spent. Rather quickly, I might add.

Sure, the savings rate has skyrocketed, and consumer credit is plummeting, and people are repairing household balance sheets. But there’s also lots of spending, and it’s the classic definition of inflation—more money chasing the same amount of goods.

Here’s a chart of 5- to 10-year inflation expectations, which has rebounded sharply in the midst of a horrible recession. Probably nothing. 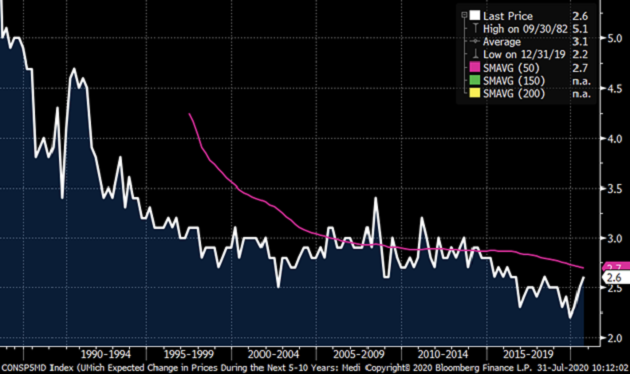 We’ve had massive monetary and fiscal stimulus. But that’s only the beginning of the story. I believe we’ve had a sharp reversal in inflationary psychology—people are gradually coming to expect higher prices instead of lower prices.

This is a subjective determination—by me—but I’ve noticed that other people have noticed that their grocery bills are going up. And if inflation has returned, it is probably going to hit people where it counts: food, energy, and other things they need.

This will rekindle some debates at the Fed over the usefulness of “volatile” inflation statistics in food and energy, and whether they represent real inflation. Spoiler: they do.

It is all about narrative, and the narrative is changing. From 2013 to 2019, all we heard about were the deflationary effects of technological progress and global trade.

Now, global trade is in retreat, and if companies are really forced to bring their supply chains home, you can count on huge cost increases. An iPhone produced in the United States will cost three times as much, and yes, that day is coming.

You shouldn’t view the coming inflation as a loss to be avoided; you should view it as an opportunity to profit. There will be gigantic opportunities for all sorts of investors, large and small. Some are obvious and some are not so obvious—we’ll dive into that part more over the coming weeks.

The Fed has made it clear that it’s willing to tolerate significantly higher inflation. It is the pinnacle of hubris to think you can goose inflation up to 4% and then keep it there.

The train has left the station, and there are no brakes.

One last thing—please check out my latest mix Suddenly Last Summer. A relaxing, chilled-out hour of music perfect for the beach or pool.

Hi Jared. I’m an avid reader of your articles. I think one thing that escaped your list of calamities, unless you called it by another name, was the Peso crumble of December 1994. That was a painful Christmas. I was wondering, though - if you’re allowed to comment on this - isn’t Tesla the most over-hyped, over-bought company in world history?

Prices are lower in gold and silver. Prices are only increasing in Federal Reserve Corporation debt notes being used as if debt is real money. The price in Fed debt notes will go up. The price in gold and silver ounces will go DOWN. Stocks are down 50% in gold eagles from 1966 to 2020. Gold has outperformed stocks, been a better store of wealth, since 1966 or 2,000 AD. Debt is a dishonest weights and measures system used to cheat people out of life, liberty, and their pursuit of happiness. Save in real US Treasury gold and silver money, an honest weights and measures system, not in debt notes. Protect yourself. Avoid using debt as if debt is money. Not true.

We are a typical middleclass couple, sitting on a bit of cash, with kids out the door. We are very price concious and definitely see infaltion is rampng up. We see it at the grocery store for sure. But other things are changing. In the midst of shopping for a major renovation of our house which includes all sorts of vendors, we find so much sold out, not just because of supply chain issues, but according to vendors because demand has sky rocketed.

People staying at home with stimulus, be it unemployment or the very generous $3400 that families with two kids earning under 150K received - there is no question that velocity is on the move. With travel, hotels, movie, sports, concerts, bars / restaurants cut out, money has been released from household budgets too.

We have other purchased planned and our plan is to speed up those with the sentiment that the cash we are holding is depreciating faster and faster, better deploy it for tangible assets now iso of 1-2 years out.

Keep up your great observations Jared, and please do share some thoughts on how to navigate the new normal for us retail investors, meanwhile I’ll go check out “suddenly last summer”.