I’m going to roll back the clock to 1986, 30 years ago, when American politics was completely different. Remember? We used to complain that Democrats and Republicans were essentially indistinguishable. After all, they used to cross the aisle frequently to vote in favor of the other party’s legislation. I would characterize both parties in 1986 as fairly centrist.

I am a little bit nostalgic for those days.

The cool thing about the Internet is that you get to find out that most people are basically out of their minds. Spend much time on Facebook? You get political opinions on Facebook, for sure—extreme right and extreme left. The vast majority of my Facebook friends are either closet communists or nativist Trumpkins. Nobody, and I mean absolutely nobody in between.

When I was in my twenties, I thought being in between meant that you were a sellout, that if you really had any principles you would occupy an extreme position. For a period in my life, you could have called me a pretty extreme libertarian. I’ve come to view political polarization as not being a very good thing.

The anti-elite sentiment is interesting, right? Because—paraphrasing a political analyst friend of mine—the notion that we would ever be governed by anyone other than our so-called elites would have been abhorrent to the Founding Fathers.

But existentially speaking, I’m starting to view moderation as a virtue. A moderate political environment is best for business and markets. For years, Dennis Gartman has said that a center-right government is best for markets. Center-left works, too, if taxes are reasonable and trade is free. But when you start talking about red reactionaries or blue reactionaries, people who want to halt trade and cut off America from the outside world, economists get worried.

I give economists a lot of crap, but they have this right: 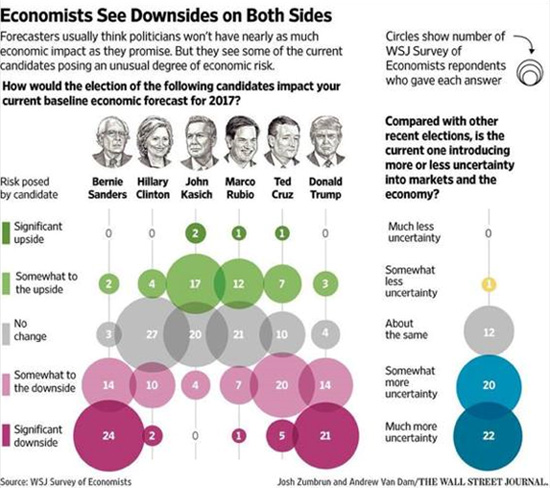 Moderation is good in trading, too. It’s nice to get excited about trades. I get excited all the time. You can get too excited. I hear stories about people who go all-in on trades, 100% of the portfolio, and it always makes me shudder. I am just not that sure about anything. I am pretty sure about being short the Canadian dollar, and I have just taken a giant mark to market in the last two months.

I have a theory about polarization—the Internet enhances it.

It’s pretty simple. In the past, if you had an extreme point of view, it was unlikely that you were going to come in contact with someone who had that same point of view. You were isolated. Now, the extreme people can find each other on the Web and reinforce their views.

90% income tax rates is not a mainstream view. But because of Bernie, and because of the Internet, a lot of people share it. Bernie won’t be the nominee, and he’ll be too old in 2020, but I bet you that we get someone even more extreme than Bernie in 2020. And I bet the Republicans will have a candidate who is even more extreme than Trump. Because the trend toward polarization is relentless.

Any candidate who got up and extolled the virtues of moderation would be laughed off the stage.

This is what I would call an eminently reasonable tax plan. Some things, like increasing the standard deduction, doubling the EITC, and doing away with the carried interest provision are unpalatable to me. But it is reasonable.

As much as I would like a flat tax of 10%, it is not reasonable. 90% taxes are not reasonable. I agree with Ted Cruz that you should send your taxes in on a postcard. That’s nice. Not going to happen.

I will tell you my college yearbook quote:

“Life without idealism is empty indeed. We must have hope or starve to death.”
—Pearl S. Buck

And then I got old.

“The man who is not a socialist at twenty has no heart, but if he is
still a socialist at forty he has no head”
...former French Prime Minister Aristide Briand, who was himself a recovered socialist.

A lot of good points in this, and the resultant problem for whomever wins each party’s nomination is that the people at the extremes will vote for them but they are still minorities and both candidates will have to sway the centrist voters, especially people like me who support neither major party.

As for tax plans, check it out, countries with the highest tax regimes in the OECD do best in terms of health care (and longevity), education, personal wealth, lower poverty, and overall well being and happiness of their populations.

The way the campaigns are shaping up, we are likely to have to choose from the best of a very ordinary lot.  I live overseas and I can tell you Trump is having a terrible impact on the US image abroad, even worse than Bush did, and that is saying something.

This is the most common-sensical politcal commentary I’ve encountered in many a moon.  Progressive Libertarian?  Excellent.

All this thought on current politics without a word on immigration (invasion?).

If a person doesn’t understand how immigration, legal and illegal, is affecting the political landscape these days and the backlash that is forming, he is out of touch.

None of these tax questions will matter when major parts of the US join the Third World.

Should taxes be reformed?  Yes, but it is a secondary consideration when the very identity of your country, your state, your city and your neighborhood is at state.

Quality of life is far more affected by the inaction (or action!) of our government on this social level, than it is on a GDP or financial level.