I was really bearish on it during the financial crisis. Even at $6 a share. I was telling subscribers it was probably going to go to zero. Obviously, it didn’t. But it wasn’t an unreasonable thing to say at the time.

I don’t feel bad about not buying GE at $6 a share.

All water under the bridge now. GE has pretty much been dead money ever since Immelt took over in 2001. Some people think that is Immelt’s fault. It’s not. GE has been getting some good press lately (including the cover of Businessweek), and the right story is starting to get out.

Jeff Immelt inherited a completely different GE than the GE that exists today. A huge portion of the company’s revenue once came from GE Capital, which was fine until it wasn’t. After the financial crisis, it became clear that GE Capital needed to be spun off or sold.

That was in 2009, but it didn’t happen until six years later.

GE is a 124-year-old company. Things move pretty slowly. I get the sense that the reason it took so long to get rid of GE Capital was because of some pretty toxic internal politics. If your organization takes six years to make a decision like that, you do not have a very nimble organization.

Say what you want about Lehman Brothers, but it was a very nimble organization.

GE is getting more nimble now. I started by reading the terrific Businessweek piece and kept reading a bunch of other stuff. GE is transforming itself into (don’t laugh, it’s serious) a technology company.

Early on, Jeff Immelt could have outsourced this, but decided instead to do it all in-house, including opening an office in Menlo Park and hiring away software engineers from places like Google.

He accomplished this without all the yelling and the performance reviews and firing 10% of the company every year. The Neutron Jack days are over.

I never write about things like GE, so why are we spending time talking about it?

Because I noticed the chart was showing signs of life, and it was starting to get some buzz on Twitter. I look for positive price action and then research the story, not the other way around. 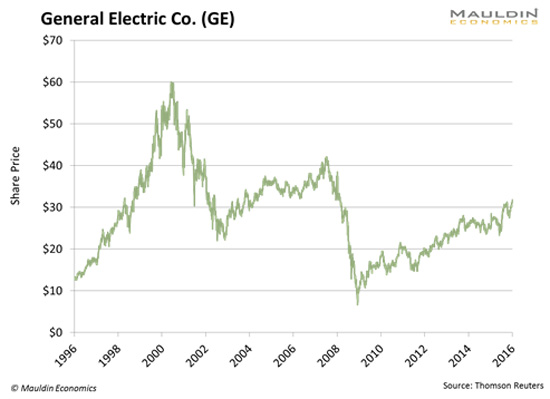 First, let me say that it’s really hard to measure CEO performance. Just looking at the stock during the CEO’s tenure doesn’t tell the whole story. GE did great under Jack Welch. But arguably, by increasing the company’s dependence on finance, it increased its vulnerability to the crisis.

Late last year, GE got itself an activist investor: Nelson Peltz, who bought $2.5 billion worth of stock, and then agitated to do… nothing! He said the company needed time for Immelt’s strategy to work, the most un-activist possible thing to say. Interestingly, the market agreed, and the stock shot higher.

You have the confluence of a lot of good things here: shareholder activism, a coherent strategy, the backing of shareholders, a great chart. And it’s underowned.

Plus, it’s a stock you can sit on, without a lot of volatility.

These are the kinds of opportunities I really like. They don’t come around very often. I like risk. I like buying things like bombed-out emerging market mining companies. But that isn’t suitable for everyone. GE passes the suitability test. And it pays a dividend.

GE was once a conglomerate, a bunch of different businesses that may or may not have been correlated with each other. We’ve been moving away from conglomerates and toward pure-play companies, which is what shareholders want. GE is now a pure-play industrial equipment company. Which means that it will probably be more volatile.

GE will have a higher realized volatility over time, and the implied volatility of the options will probably go way up. One way to play this is by buying long-dated call options (otherwise known as LEAPS) on GE instead of the stock itself. It’s a play on both a rising stock price and rising volatility.  Long-term options are most sensitive to changes in implied volatility.

I have always been a believer in Immelt. Patience has been required. Patience will be rewarded.

Though sometimes success can come fast too. Case in point: My latest Street Freak recommendation, an undervalued North American construction supplier with a huge market share, is already up 20.5%. Might be time to give Street Freak a try, so why don’t you?

They waited to sell GEC until they could realize best values
possible for it, didn’t want to sell at bottom knowing central banks
would bubble that stuff up again, the debt-fueled reflation efforts.
(fixed typo so re-Posting)