As most of you know, my first finance job was as a clerk on the floor of the P. Coast. I worked for a market-making firm.

Within about a year, I was in a position to be conducting job interviews. It was the dot-com bubble; things were moving fast. Anyway, this young guy—a clerk for one of the clearing firms—gives me his resume.

I remember. Peninsula College was in Port Angeles, Washington, where I was stationed for my first tour in the Coast Guard. It wasn’t a very good school. In fact, it was pretty bad.

I tell him I know exactly where Peninsula College is.

Volatility Is Hard to Understand

What is less obvious is that if you are an investor, volatility works against you. As an investor, time works in your favor, so your investments compound.

And as we all know, time and volatility work in opposite directions. Volatility is bad for investors, because it increases the likelihood that you will be shaken out of a position and your returns will stop compounding.

It took me almost twenty years to figure this out.

Twenty years ago, we were a nation of traders. Remember everybody day trading at work? That’s because the market was volatile. Back then, the typical range for the VIX under normal circumstances was 20-30.

The good news: we have become a nation of investors. People buy index funds (and actively managed mutual funds, and sometimes stocks) and just hang on. For years. But people haven’t become long-term investors because they’re a bunch of Jiminy Cricket Vanguard jerks. It was a gradual response to a change in the environment. It’s useless to day trade when the S&P 500 moves 20 basis points a day. It’s rational to buy and hold instead.

But I can say with a very high degree of confidence that we have now departed the low volatility regime and entered a high volatility regime. Everything that worked for you for the last several years will no longer work. I don’t even know what that is, but it is definitely true.

Here is something in the category of “things that no longer work”: 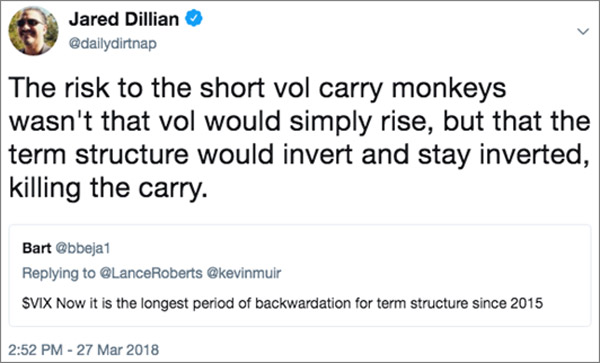 You remember me moaning and complaining about the short vol carry monkeys. I started warning about a short vol unwind almost a year ago.

A lot of the short vol carry monkeys got blown up on the vol-splosion from a month ago, but not all of them. The short vol trade didn’t just depend on low vol, it depended on an upward-sloping term structure of volatility.

My old boss at Lehman once gave me a piece of trading advice. “There is a relationship between volatility and liquidity,” he said. When the Fed adds liquidity to the system, it suppresses volatility. When it withdraws liquidity, volatility rises. This may seem obvious, but it was news to me at the time.

The Fed has been steadily withdrawing liquidity for a while. It’s not the rates-ripping Volcker Fed, but they’ve very quietly raised rates almost two percent, all while tapering the balance sheet. That’s a lot of liquidity being withdrawn from the system. It should be no surprise that volatility is skyrocketing.

Will volatility stay high? It depends on the Fed. It depends on Jay Powell, who seems pretty confident in his ability to proceed with lots of rate hikes. He also seems to be unfazed by market volatility, unlike previous Fed chairs.

For the past five years, the Fed, under Yellen and Bernanke, had been accused of pandering to the stock market. That has clearly come to an end. Yellen, in particular, hated volatility—everything about the Yellen Fed was designed to keep volatility low.

There’s a new sheriff in town. There’s no Powell put. That’s a sobering thought—for the first time in years, we’re trapeze artists without a net.

The key to being a long-term investor in this environment will depend on your ability to construct a portfolio that minimizes volatility by finding a bunch of uncorrelated stuff. I’m here to help.

A bunch of you joined The Daily Dirtnap this week, so you already know the answer to that.

Smart investing is now being rewarded.

I cannot stress this enough—The Daily Dirtnap is made for this new environment. If what’s happening in the markets makes you want to roll up your sleeves and get dirty, then you should strongly consider joining me (and more than 3,000 other subscribers).

We were going to cash for months because I saw this new regime coming, getting ready to go shopping. And opportunities are already popping up—I’ve opened several new positions in just the last couple of weeks.

I will be honest—I am now having fun. When it seemed like nothing could spook the bull market, it wasn’t always easy. Now, for the first time in a long time, things are actually happening on a daily basis.

As well as going shopping though, it’s equally important to have your emergency plan in place (or, as a reader called it, your “Always Ready” plan).

Get all of that here, and I’ll send your first issue of The Daily Dirtnap tomorrow morning.

What was your first assignment in Port Angeles? You didn’t get three years sea duty and a year in Vietnam like I did?