First, thanks for all the comments you sent about last week’s video issue of The 10th Man. I’m glad so many of you found it helpful. Normal service resumed this week, so let’s talk… baseball!

My whole life, I had always wanted to catch a foul ball at a baseball game. From when I was a little boy, I used to bring my glove to the game. I did this for years, until I decided that a grown man should not be bringing a baseball glove to a game.

I came close so many times. At one game, I had seats on the first base line, and had the ball clank off my hand into the hands of the guy next to me. I had a 10-year-old boy juke it out of my grip at a spring training game in Arizona. I was too short to catch one behind the net at Yankee Stadium. I had a shot in the upper deck at the Oakland Coliseum, but I was busy eating.

I was 39 years old, had been to hundreds of major and minor league games, and had not caught one single foul ball. I had pretty much given up.

In August of 2013, I went to catch a Pelicans game with my brother here in Myrtle Beach. We got bored of sitting in our seats, so we were standing in the walkway along the first base side. I was busy telling my brother that I was foul ball Kryptonite, that no matter where we were in the stadium, there wouldn’t be any foul balls.

Suddenly, the batter lifted one in the air our direction—it was coming towards us! I watched it in slow motion as it landed on the cement about four feet in front of me and I caught it on one hop. I looked at the ball to make sure it was real. I just caught my first foul ball, at age 39!

What I hadn’t counted on was dealing with the ballhawks. Some kid comes up to me after I make the play, and says, “Hey mister, nice catch! Can I have the ball?”

“Beat it, kid,” I told him. I wasn’t going to give him my first-ever foul ball.

So he turned his wheelchair around and rode away.

I’m Not Superstitious, But…

After I caught that foul ball, good things started happening. My brother even told me in the car on the way home, “This is a turning point for you. I can feel it.”

First of all, I started to fall ass-backwards into money. It was coming from all directions, without me even trying. And it hasn’t stopped. I was never really one to worry about money anyway, but from that day on, I haven’t worried about it at all.

Of course, all of this is probably one giant coincidence. There is no reason why this baseball should suddenly change my luck. 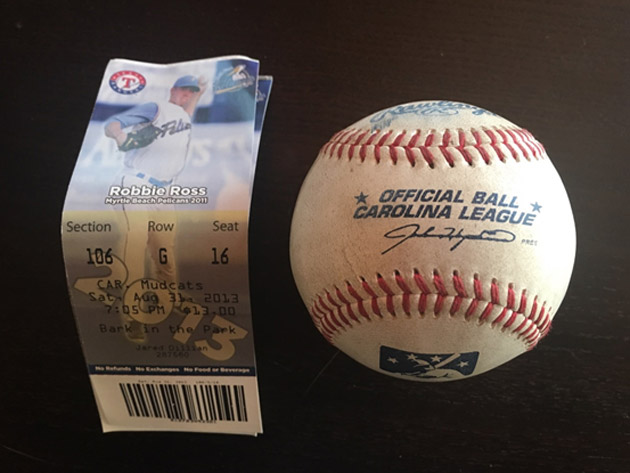 But this is what human beings do: they take random events, try to connect them together and draw some kind of meaning from them.

I’m scornful of superstitious behavior, but we should pay attention to these sorts of things.

I had a professor in grad school who was not a big fan of technical analysis. He was Spanish, and said in a thick Spanish accent, “Technical analysis, what is this? We do not pay attention to this.”

But charts can be pretty important. If everyone in the market is aware of a major point of resistance, and the market breaks through that resistance, chances are, people are going to follow it higher.

So I think very basic forms of technical analysis—like trendlines, support and resistance, and flag/pennant formations—are pretty useful. Not because they work, but because people believe they work, so they work.

I’ll let you in on a little secret. Much of algorithmic trading is based on trading these sorts of technical formations. Yes, people program the computers to do it.

There is a push for something called “evidence-based investing” in finance, but much of what passes for science is actually scientism. It’s hard to quantify much of finance, which is why voodoo flourishes.

I will be the first to admit that much of what I do is voodoo, trying to get sample data of sentiment or position through covers of The Economist, my communications with people in the market, and what I see on Twitter.

Honestly, I think the voodoo works better than the science. Some of my best trades in The Daily Dirtnap have been pure sentiment-based trades.

When people try to apply hard science to economics and investing, and they’re rigid about it, they can get in a lot of trouble.

Economics is a soft science with a human element and there is no grand unified theory that pulls it all together. It is a field where you can pretty much say anything without justification.

I think the best chance that most novice investors have to navigate this is to understand that the financial markets are an endlessly complex poker game, and if you make money as a beginner, you are either lucky or you have an extraordinarily long time horizon.

As for the baseball I caught, I had better put that in a safe deposit box.

One last thing—be sure to catch the latest episode of The Monthly Dirtcast with Jason Brady, CEO of Thornburg Investment Management. I call him: the new bond king. The bond king you never heard of before. Tune in.

Love the wheelchair bit…that gave me a chuckle…you bastard! lol.