All I want is a private jet for cats.

Let me explain. My favorite city in the world is Halifax, Nova Scotia. I got engaged there when I was 21. I was enchanted with the place, and my wife and I have been back a few times in the last five years.

This is how all discussions about second homes start: “Wouldn’t it be nice to have a place here?”

So, on one of our return trips, we met up with a real estate agent who showed us around a bunch of different places. USDCAD was 1.46 at the time, so stuff looked pretty cheap in dollar terms.

We were looking for new, modern, high-rise condos. We fell in love with one unit, and I was *this close* to putting in an offer. But I couldn’t pull the trigger. Getting there from Myrtle Beach is a nightmare.

I fly American a lot, and it got us from Myrtle Beach to Halifax via Philadelphia and Boston. Two stops, with short layovers. If anything goes wrong, you’re fungooed.

American eventually discontinued service to Halifax, which left United. It had a direct flight to Newark, then on to Halifax, with a three-hour layover. But it was seasonal.

Otherwise, you had to scratch your way to Toronto via Charlotte, and then fly to Halifax via Air Canada. No easy options.

My wife and I were thinking of buying this place and spending the entire summer up there. So we’d be bringing two months’ worth of clothes, electronics, and all five cats.

I said to myself: This is ridiculous. There is no possible way we can fly commercial with all five cats.

The only way this works is if you have a private jet for cats.

Whenever someone asks me what my financial goals are, I tell them “private jet for cats.” I want to have enough money for a place in Halifax (which isn’t that expensive) that I can go to via $20,000 private flights.

I could do it now, but it would be a bit irresponsible. I want to get to the point financially where private air travel, taken a few times a year, isn’t that much of a stretch.

You need to have a big imagination to get there.

A friend of a friend is long Tesla (TSLA). When asked if he was going to sell, he said no. He said that when Tesla implements autonomous driving, it’s going to be a trillion-dollar market cap.

And you know what? That doesn’t sound as crazy as it did two months ago, which was when he said it. He bought a large slug of stock when it was in the 200s and hasn’t sold a share. It was a big risk, and it has been a seven-figure winner.

That is how you get your private jet for cats. 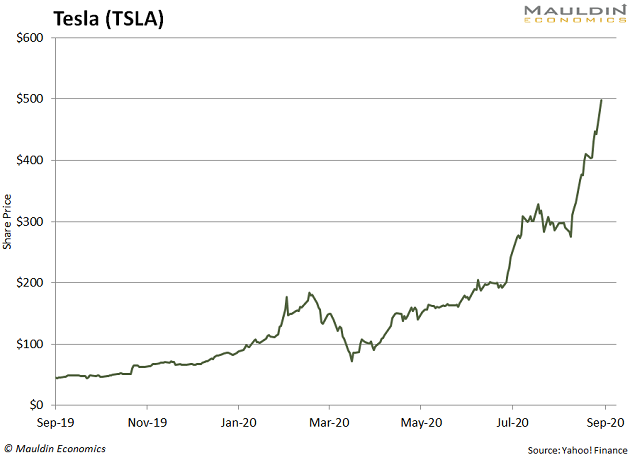 I was long TSLA in 2013 and short it in 2019. On balance, I made money. But not a lot. You make private jet-for-cats-money by taking large, long, concentrated and possibly leveraged positions—and you need a very big imagination.

One of the nasty side effects of 2008 is that everyone is looking for the next Big Short. That sort of thing only comes along once in a generation. There are a lot more Big Longs than Big Shorts. Most of the time, that is a very difficult way to make money.

When I look at the chart of TSLA, I am sad. Despondent. Sad because I missed it. And I had the right idea—TSLAQ was going nuts on Twitter when the stock got down to 180. They were dancing in the streets.

For what it’s worth, we did have exposure to TSLA in the Street Freak portfolio—through options. But we did not have a big enough imagination.

Remember the James Altucher ads—Crypto-Genius Reveals Next Bitcoin. What is the next TSLA? That is what I am constantly searching for. And you have to be an idiot to get it right.

What do I mean by that? The friend of a friend—the guy who is long TSLA—made it more than 50% of his portfolio, breaking every rule of risk management. He had that level of conviction.

When I look at people who have made these sorts of trades over the years, they are not as smart as I am. Which is an asset, actually.

But it’s funny—I have thousands of pages of notes for my radio show. By the way, you can call the show and talk to me about anything related to money. Or cats. Or private jets. I’m on the air live every weekday from 6pm–8pm ET. 1-844-305-7800.

Anyway, I was looking through some stuff I had written for the show in 2018, and I was complaining about growth’s outperformance over value. I said that it was unsustainable—and this was two years ago! So, you just never know.

I don’t know what the next TSLA is, but I can tell you that it’s probably not large-cap tech. You don’t do the same gig twice.

It will be something else—maybe gold, maybe energy, maybe Japan. Could be any of those things. But someday, there will be another TSLA. And you have to have enough conviction to be irresponsibly long, and enough conviction not to sell when every cell in your body is telling you to sell.

The cats still haven’t flown on a private jet yet. From the cats’ standpoint, this is probably a good thing.