I used to work on an options trading floor 20 years ago.

Calls are a way to get cheap exposure and leverage to a stock going up. And, since stocks have been going up, people have been buying more call options.

This has set in motion a self-reinforcing process, where call-buying has led to hedging activity, which has pushed prices up, and led to more call buying, capped off by the $4 billion SoftBank spent in option premium in the last few weeks.

But retail traders have spent $40 billion in option premium. 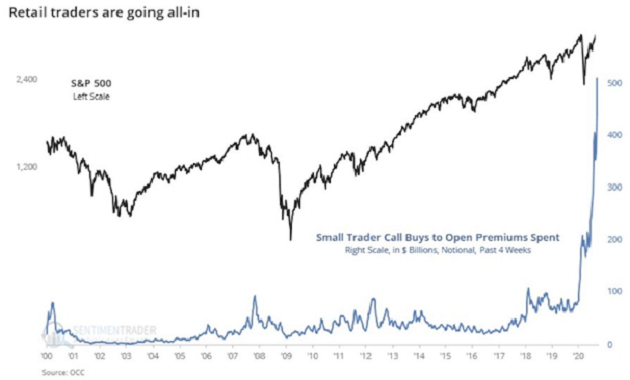 It is widely understood that retail piles in at the top. When they pile in at the top with call options, look out.

Did we just put in a top? It is very likely. But topping is a process, not a moment.

In the old days, if you wanted to trade options, you had to provide some attestation that you knew what the hell you were doing. Then you would get this incomprehensible booklet from the Options Clearing Corporation called “Risks and Characteristics of Standardized Options.”

I was cleared to trade options in 1999. I sort of knew what I was doing. My first trade: long-term covered calls.

These days, people trade options for the leverage, mostly buying short-term options with maximum gamma. These options also have maximum theta—they decay very quickly. If you take the $1,000 that you were going to use to buy a stock, and buy call options instead, you are exposing yourself to a 100% loss.

I suspect articles will be written in the coming weeks about retail investors who bought call options like jerks, only to watch the premium get vaporized.

The options market has become large enough that it’s the tail wagging the dog. 45 million contracts equal 4.5 billion shares of stock. The derivatives market is getting bigger than the spot market. There is a lot of money to be made by market makers.

It’s not as if retail investors couldn’t trade options before. When I was on the floor, most traders would put themselves on the “wheel,” which was slang for RAES, or Randomized Auto-Execution System, where traders would get auto-exed on small orders of up to 50 contracts.

These orders were typically profitable. And they’re still massively profitable for the big quant trading firms that have replaced the thousands of market-makers in open outcry pits.

Again, what we have here, as we’ve had so many times in history, is a giant wealth transfer from the unsophisticated to the sophisticated.

The Life Cycle of An Investment

Fourteen years ago, I came up with this diagram: 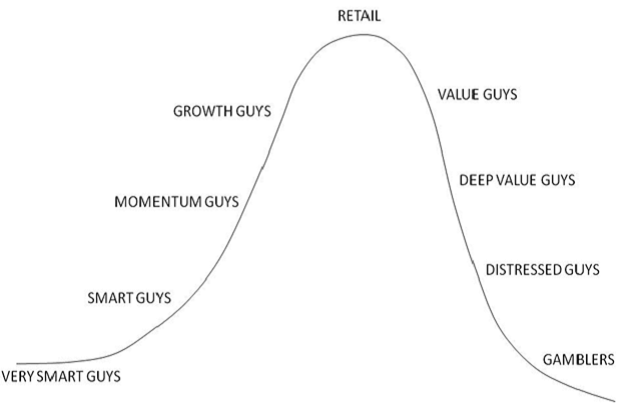 It’s sort of tongue-in-cheek, but I wanted to identify the points in a stock’s life cycle when different classes of investors get involved. Of course, retail always gets involved at the top.

People have different time preferences, so nobody holds a stock throughout the entire cycle. Very smart guys sell to the smart guys, who sell to the momentum guys, and so on.

But retail is always at the top. They are the last to know.

I’ve seen this cycle several times throughout my career. It plays out the same way every time, although we’ve been denied a distressed cycle over the last 10 years; the one we just had was very, very short. It actually matches up pretty well with bitcoin.

By the way, some of the very smart guys also follow me on Twitter, but everyone’s invited.

Asset bubbles are all the same. They end when people believe they’re getting free money.

As we all know, investing isn’t easy. It’s not supposed to be easy. The definition of a bubble is when people are making money all out of proportion to their intelligence or work ethic.

Easy things become hard, in time. Of course, the straightforward way to profit off of easy things becoming hard is to short things. But shorting things is hard—I’ve had mixed results with that over the years.

I’ve had better luck looking for second-order ways to play the bursting of a bubble, which is to buy things that are out of favor. What was in favor goes out of favor, and what was out of favor, goes back in favor.

I am less sure that this was a “top” in stocks, but I am more sure that we’ve reached the end of the growth/value trade. Value stocks will go back in favor.

And if you are one of the “very smart guys,” you will be ready.

Jared,
And how exactly hedging of call option pushes prices up?
This statement does not make sense.
Yuri