President Trump recently nominated Judy Shelton to the Federal Reserve Board of Governors. She is the United States director for the European Bank for Reconstruction and Development, which I had never heard of until her nomination.

You may wonder how a person can be in favor of a gold standard and also for lowering interest rates at the same time.

I am wondering that, too.

We seem to have a case of someone being ideologically inconsistent in order to secure professional advancement. The slang for this is “selling out.”

But that would be impossible.

The confirmation hearings are going to be interesting.

Of course, failed Fed nominees Stephen Moore and Herman Cain also believed in hard money and soft money simultaneously. Where do these people come from? They didn’t exist a few years ago.

Go back to the days of Thomas Hoenig. He was another champion of gold, but also a big-time interest rate hawk on the FOMC, back in 2010. Now that is someone who believes in hard money.

Real interest rates are zero and Trump thinks they are too high. I have been saying in The Daily Dirtnap for some time that Trump thinks Fed funds should be zero or negative, and he won’t stop criticizing the Fed until he gets what he wants.

He might have to replace the Fed chairman in the process. Judy Shelton and Christopher Waller (decidedly a soft money advocate) are both chairman material. My guess is that it would be Richard Clarida, who has the resume for it and also has been very malleable to Trumponomics. This goes back to what I wrote about two weeks ago: Trump is an unstoppable force that is going to change the face of macroeconomics for decades.

I don’t believe in soft money. I believe in metallic monetary standards and persistently high interest rates. I really am curious as to the psychology of Judy Shelton, Cain, and the rest of them. Did they really change their minds? Or are they really that cynical?

I suspect it is the latter.

In Trump’s defense, it hasn’t really made any sense to be vigilant about inflation. We had rates at zero for the better part of a decade, and we didn’t get inflation.

Unless of course, you’ve tried to buy a house in San Francisco. Or a stock market index fund. Or a college education. Low interest rates have inflicted just as much economic misery as high fuel and energy prices did at one point in our history.

It is accepted wisdom that Federal Reserve policies have actually exacerbated inequality, by ballooning the prices of financial assets. 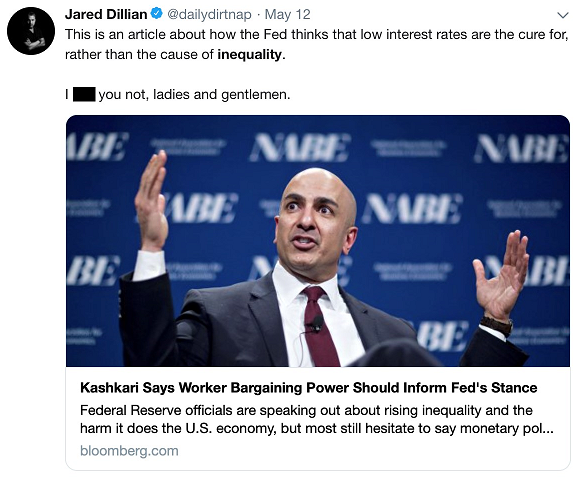 Yet the Fed actually believes the opposite—that low interest rates solve the inequality problem. At least, Kashkari does. He’s another ZIRP NIRP Republican.

We used to worry about dovish Democrats taking over the Fed and cutting interest rates and bringing back the inflation of the 70s. Now the Republicans are doing it! A Democratic administration would behave no differently. Sobering thought—we are in for decades of ultra-loose monetary policy.

What do you think is going to happen next?

How would you position your portfolio?

I know there are plenty of stock market bears reading this newsletter. Think of what unlimited monetary stimulus is going to do to your short positions. It is going to hurt like an Alvin and the Chipmunks Christmas CD.

I’m not optimistic on stocks—it’s just the reality of the situation. Unlimited. Monetary. Stimulus. Forever. Those houses in San Francisco are probably not going to get any cheaper.

Who’s on the Fed matters a lot more than who’s in the White House. That can affect your daily life, from the cost of gas you use to drive into work every day, to the cost of the coffee you drink, to the return on your investments, to the value of your real estate.

Jared, thanks for another thoughtful article. I respect your opinion. Did you know the stock market is down 30% over the past 53 years in real US Treasury money, gold bullion? Did you know wages are down 50% in silver dollars over the past 53 years? But of course stocks are up 2,500% in fake, debt note, computer credit Federal Reserve “dollars”. These currencies compete. What to do? Stocks regularly fall 50% every ten years, and will again. I believe every person should hold 50 ounces of gold and 1,000 ounces of silver in case of a currency reset. Gold is real money, a claim on the past. Debt notes and computer credits are fake money, driven out of circulation by bad money, paper currency, that has no value other than faith. Why do I pay sales tax to turn my fake money in for real US silver coins in MN? Shame. The Fed has created 19 TRILLION DOLLARS in public debt from 1986 to 2019 in peace time. Rates down from 18% to close to zero. I quit my teaching job in 1976 after three years figuring the pensions would default. What defaulted was the dollar, counterfeiting into oblivion but with no inflation? I would call 2,500% inflation in stocks, inflation. I would call housing prices from $10,000 to $260,000 inflation. People can only pay so much and they run out of credit. The 2008 crash/bailout was caused by giving away currency for housing purchases of low quality housing and low quality buyers. There will be a reset, don’t know when or how but there will be. Thanks for your thoughts.

I would rather we fight an economic war than a hot war with China. China doesn’t play by the WTO rules. There is no free trade with them. The only rules they follow is what benefits the CCP. If we take the CCP “China 2025” doctrine at face value, they intend on supplanting the US. Should we continue to give them more rope to hang us by?

Using Wikipedia as a reliable source for the premise of your article discredits it from the start.  You might as well use the New York Times as your fact bible.

I wonder if it has occurred to anyone that Shelton might be right on all counts (except for trade on which she is definitely a sell-out)? The Fed made a huge mistake during the recession of encouraging too much debt. But given that we have that debt, this causes low interest rates (see Lacy Hunt). Thus if we suddenly had a free market in interest rates, short term rates might actually be lower than they are now. So it may not be inconsistent to get rid of the Fed, i.e. have a gold standard, and still have market-set short term rates lower than they are now. If we eliminated the debt, THEN interest rates would (and should) go up!

Damn Jared, Sometimes you even outdo yourself.  This is so awesomely great today. You are consistent in a manner that seems to be out of style these days.  Cheers, and has been said before, don’t bet against the Fed.

Trump has to have a loose money policy to get elected next year.  Once he starts his last term he will have the flexibility to change and then can be judged accordingly.

I am a free-trader. The world is not anywhere close to a free-trade place. As a result, our policies have actually made the world less free trade.  We have provided near free-access to our markets without requiring reciprocity. As a result, other nations have gamed our system to our detriment.

Managing trade is the best we can do towards producing a free-trade model. Demanding reciprocity is a necessary first step. After that, we can negotiate for ever lower barriers. Without the reciprocity first, there is no way to negotiate a real free trade agreement.

We have never had free trade because there has never been an even playing field.  We exported environmental degradation and employee exploitation in the name of low prices.  I have no idea how anyone else is thinking, but it has bothered me for years that the USA has environmental and employee protections and trades without terrifs with countries which have neither.