There was a big bull market in the early 1970s, led by a group of fifty large cap stocks known as… drum roll… the “Nifty Fifty.”

There is actually a Wikipedia entry for the old Nifty Fifty—click on it and you will see that while a lot of these companies are gonzo, the rest of them very much resemble today’s Dow.

Of course, I was not around to remember the Nifty Fifty—I was born in 1974, truly a child of the bear market. Stocks were down 45%. There is also a Wikipedia page for that bear market—they even call it a “crash.”

The two, of course, are related. A bubble, accompanied by an obsession or a preoccupation with a stock or group of stocks, followed by a great big dirtnap. 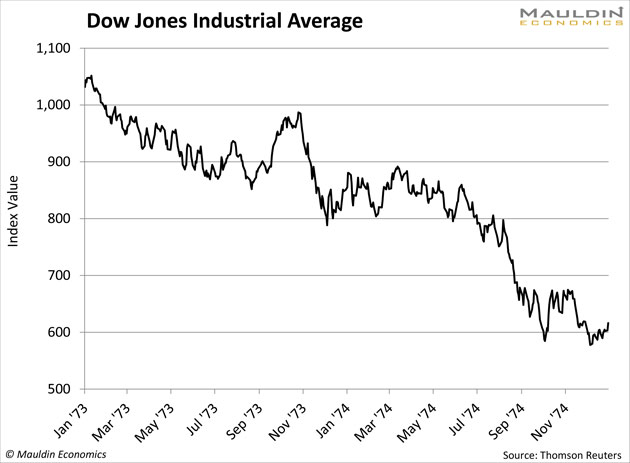 You look around today and wonder, is there anything like a Nifty Fifty? Well, there is FANG, but FANG is only four stocks. Besides, I don’t get the impression that any of those stocks on their own has anything like a cultish following.

People are bananas about the stock market.

Indexing, which was a curiosity in the 1980s, has become a religion. You invest in an S&P 500 index fund. Why? So you are diversified. You own 500 stocks, which is the ultimate in diversification.

Except—you are not diversified when 30 million people own the same 500 stocks as you, because what happens if everyone wants to sell their 500 stocks all at once?

It actually is a bit like the Nifty Fifty—it’s just the Nifty 500!

“Is it different this time?” you ask the veteran of two ridiculously horrible bear markets.

Well, you always have to entertain the idea that it could be. After all, indexation only makes up a small percentage of total investable assets. And it continues to grow, partly because its growth is encouraged by regulatory changes like the Fiduciary Rule. So there is a lot of momentum.

But you have look at all these inflows into indexes, and ask what would happen if the flows went the opposite direction and they turned into redemptions.

Vanguard gets $2 billion in new investor money a day. What if it lost $2 billion a day?

Not saying it will happen, just being the “what if” guy.

There is no trend in finance that is not capable of running in both directions.

How do you protect yourself? I mean, the S&P 500 makes up most of the investable market cap.

You could do small cap or mid cap, but there are indices for those, too.

In fact, there are way more indices than stocks, so it’s hard to find a stock that is not in an index.

But it can be done.

One of the things I focus on is not getting inside too many crowded theaters with tiny exits. If you are an institutional trader for any length of time, you learn to be paranoid like this. You are constantly asking the question, “How am I going to get screwed?”

Nobody trades stocks these days—they trade index mutual funds and ETFs. So you do the best you can to stay away from big, popular indices.

There actually are a handful of stocks, about 100 or so, that are not in any index. I did some work on this about a year ago. These stocks will not participate in the Nifty 500 on the way up…

…but then again, they won’t participate in the Nifty 500 on the way down.

If I were a research analyst at a large hedge fund with some time to kill, I would go through every stock in the Wilshire universe. I’d figure out how many indices it is in, and the AUM that tracks those indices. Then zig, while everyone else zags.

The Bullish Argument Is Most Compelling on the Highs

Unfortunately, I did not make the Inside ETFs conference this year, but I spied a photo from the conference on Twitter: 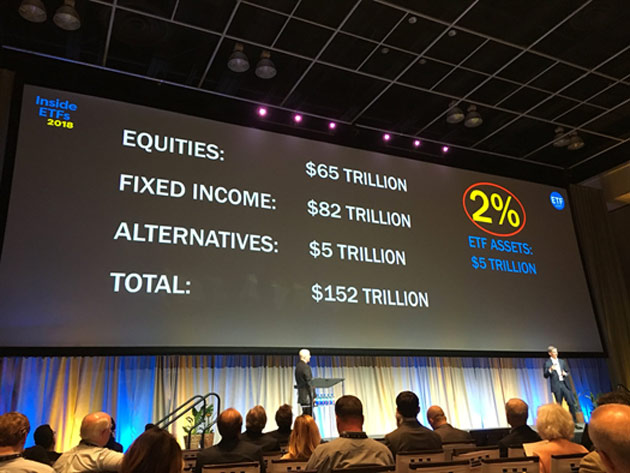 The slide is making the point that ETFs only make up 2% of investable assets, a figure that will certainly grow.

And it will probably continue to grow for some time, because the ETF structure has some clear advantages over the open-end mutual fund.

Remember, I’m the “what if” or “yeah, but” guy. I’m just observing that people are more bullish on indexing than at any point in history, concurrently with some other sentiment and technical indicators that are unbelievably stretched.

Assuming you view the market as a supply-demand equation, the only way you dump supply on the market is if you get index fund redemptions. And how does that happen?

Beats the hell out of me.

If you’re planning on going to the 2018 Strategic Investment Conference, now is the time to get your ticket. Last year was terrific (Matt Ridley was a personal favorite) and SIC 2018 will be too.

If you can make some time to come to San Diego for the conference, it really is worth it. The thing about SIC is, it’s a big conference, but small enough that you can have face-time with the speakers. Even a few minutes talking with someone like Louis Gave or Mark Yusko or John Mauldin is probably worth the conference fee.

Also, I will be part of an ETF panel, and moderating another one on cryptocurrencies (featuring hedge fund manager John Burbank). And I’ll be interviewed on stage, and I’ll be DJing. You should come. All the details about the speakers and agenda are right here.

In silver money the median house hold income is DOWN 60% from 1966. In counterfeit currency, Federal Reserve debt notes, the median house hold income is up 700%. Which one is right? Both? Neither one? As long as we are all slaves to counterfeit currency, working for free as debt slaves, wage slaves, sex slaves, prisoner of financial war slaves, working for counterfeit computer credits, the stocks will always go up, up, up. We are child abusers, training children and immigrants to work for 50% of their labor, and lose 6% of their savings every year. If we convert to silver and gold money the system will end. Until then it’s a counterfeit currency debt bubble that will be inflated by machines FOREVER.