Now would be a good time to follow me on Twitter if you haven’t already, because stuff is about to get real.

I was finger-scrolling through The Daily Shot the other day (a daily chart package mailed out by The Wall Street Journal—it’s a must-read for everyone in the business), and I came across this: 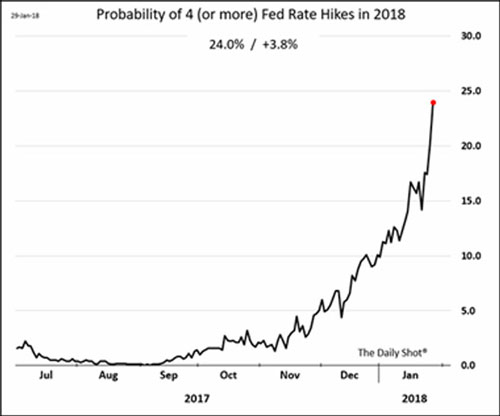 People are getting bulled up on the idea that the Fed might hike more than three times this year.

That’s not unreasonable, given that stocks have gone straight up and financial conditions are the easiest they’ve been… ever. I hereby present a chart of the GS Financial Conditions Index. 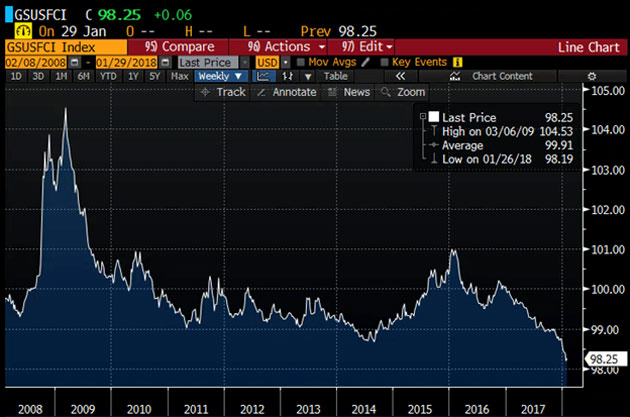 Note: an increase in the FCI is evidence of a tightening of financial conditions, and a decrease indicates easing.

Lots of folks (like me) have been telling the Fed to take away the punchbowl. We have bubbles everywhere and we still have negative real interest rates.

Who knows, maybe they will finally listen!

It is possible that we have zero.

It is possible that we have rate cuts.

Markets being what they are, I will tell you one thing for sure: I don’t know how many rate hikes we have this year, but it probably won’t be three.

Right now, the market is implying an 84.3% chance that we will have two, three, or four rate hikes in 2018, according to Bloomberg calculations based on Fed Funds futures. That is a high degree of certainty.

People are making a lot of assumptions about the Fed:

Point is: anything can happen. Powell could rip rates, or the Dow could puke 500 points about a dozen more times, the economic data could roll over, and we could be talking about rate cuts.

Twenty years ago, the Fed was a source of volatility. Intermeeting rate moves, 50bp moves all over the place. Now, the Fed is a source of stability.

Should the Fed be a source of volatility? In a Fed-free world, there would probably be lots of volatility in the market for short-term interest rates. By suppressing that volatility, is the Fed doing anyone any favors?

It’s leading people to believe that the world is less threatening than it actually is. Do you think people can be encouraged to take risks that they otherwise wouldn’t?

My personal opinion is that the Fed will hike less than three times (could be zero) and the best-performing asset of 2018 will be short-term bonds.

It might be the only performing asset of 2018, because there is no place to hide anywhere else. We saw that on Tuesday—stocks and bonds both down. That is because stocks and bonds are both overpriced, which I’ve said a million times before.

The market is nothing if not filled with irony. These days, people aren’t satisfied with anything less than 50,000% on some alt-coin. The irony is that a total return of 4% on short-term bonds (2% income, 2% capital gains) might be a home run year in 2018. I don’t think two year notes are on anyone’s list of top picks this year.

One more fearless forecast: this might be the first time in maybe forever that we have a bear market, and a recession, without the yield curve inverting. The curve has actually been steepening a bit, which I speculate is mostly due to supply. We run bigger deficits + the Fed chickens out = it is going to be really hard to invert the yield curve.

It would probably be a good idea to enter this year with lowered expectations. Sharply. What we had last year was investor Nirvana. If you caught it, good for you. I would not try to repeat the experience this year.