The stock market is the opiate of the masses.

Oh sure, the days of watching Jim Cramer mash buttons on his console with his sleeves rolled up to his armpits are pretty much over. And nobody really day trades anymore, except for masochists. And, despite a 10,000-point rise in the Dow since the election, nobody seems all that happy.

But the stock market is still the opiate of the masses.

I know this because anytime I go on Twitter, the financial pundits are tweeting about stocks. They usually don’t tweet about bonds or commodities or FX. I follow one or two oddballs that tweet about volatility. But it’s usually wall-to-wall stocks. Mostly Farmers’ Almanac stuff about how “9 of the last 11 Decembers have been positive,” and “60% of the time it works every time.” Not a lot of value added. So I spend less time on Twitter.

And even though people aren’t whipping and driving stocks, they’re whipping and driving index funds. The obsession with the stock market is still there; it’s just morphed into something entirely different. Vanguard, by the way, is now showing television commercials. I take this as a sign.

People are still enthralled by the stock market. Index funds might not be as exciting as dot-com stocks to talk about at cocktail parties. But people still go home and feel a thrill up their legs when they log into their Vanguard accounts and see a big fat number.

Bonds Are Not the Opiate of the Masses

I was a noisy bond bull earlier in the year, and I pissed a lot of people off. It was the right call, but not a popular one.

I am still bullish.

There are virtually no bond market tweets, aside from me doing a sack dance every once in a while. Which is interesting, because the rally in bonds has been just as historic and unprecedented as the rally in stocks, and perhaps more so—but nobody is interested. Not only is nobody interested, everyone hates it. Every time bonds sell off ten basis points, the internet erupts in cheers.

Interest rates will stop going down when a full-fledged bond mania develops. It might take a while.

Just in the past few weeks, we’ve had a blowout payroll number, a Boris Johnson victory in the UK, and a bunch of other bond-torching news. And the bond market has steadfastly refused to sell off. Not a lot to hang onto, if you’re a bond bear.

Sure, a lot of things could pop the bubble if you think it’s a bubble. Inflation fears could do it, lots more Treasury supply, etc. And the flows just keep on coming. High-yield spreads have dropped to historic lows. 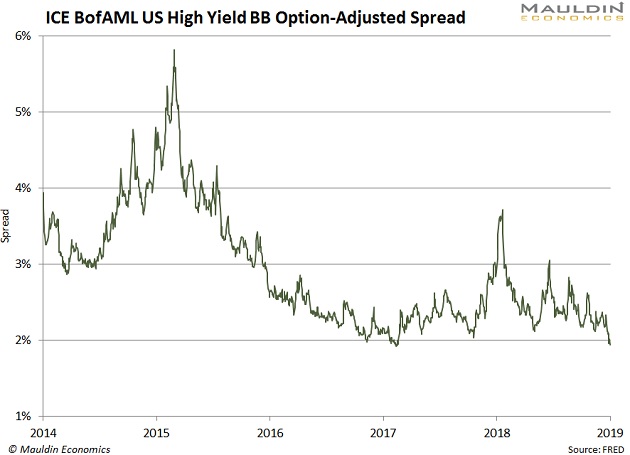 If people are this unhappy when all financial assets are shooting off into space, what will happen when we actually get a bear market?

I think about this all the time.

Investors believe that financial markets are supposed to behave a certain way. They believe they’re supposed to reliably produce 8 percent returns every year. Or more, in the case of 2019. When they don’t, people get a bit indignant.

They hold these two conflicting ideas in their heads simultaneously. It’s a feat of mental gymnastics that I cannot replicate. The fact is we don’t know what the stock market will return in the future. It could return 4 percent, or 0 percent, or -4 percent, or 16 percent. We just have no idea.

Now, the problem is that people have done all this actuarial science around the 8 percent number to plan for retirement. There is a good chance that we might not hit that 8 percent number for a bunch of reasons, not the least of which is politics. If Bernie Sanders is elected president, I assure you we’ll be off to a pretty poor start.

It may turn out that actual returns are lower, and people may find they should have saved a lot more. That is almost always the case—people’s realized returns are lower than theoretical returns because they can’t help but engage in market timing.

Someday, I’ll get around to figuring out historical returns on that.

The one thing you do is make me chuckle. Keep up the humor and don’t be afraid to be a little sarcastic because I like it.

Close. CURRENCY DEBASEMENT is the opiate of the masses, driving up real estate, stocks, bonds, land, gold, all real assets, also known as the EVERYTHING BUBBLE. It’s all the modern magic money machine, expanding the counterfeit currency by 7% a year since August 15th, 1971. Millionaires become billionaires. It’s raining debt, raining currency, NOT raining money, coined by the US Treasury.

It’s disappointing to see sentences like “If Bernie Sanders is elected president, I assure you we’ll be off to a pretty poor start” continually crop up in otherwise interesting articles. Those who said America would cease its existence in 2008 when Obama was elected were not only wrong but substantially poorer had they divested for their partisanship. Then the same thing happened in 2016 for Trump, who’s detractors were both wrong and with a smaller pile of money than if they’d put politics aside and stayed invested.