Happy Thanksgiving! I’m going to give you some results from the survey we gave you a couple of weeks ago. Whatever you do, don’t talk about it at Thanksgiving dinner. People have pretty much lost their minds and the sweet potatoes are going to start flying.

But first, if you haven’t had the chance to listen to the call I had with EventShares CIO Ben Phillips about politics and investing and what happens next, you really should take the time to do so. It was great. It’s still available right here.

Anyway, I gave you The 2020 Survey to see how you thought politics was progressing here in the United States. Around 10,000 of you took the survey, making these findings a pretty good picture of how The 10th Man readers are thinking right now. The results were very clear. You think things are getting worse, and that’s because they are.

To start off, you think polarization is getting worse. 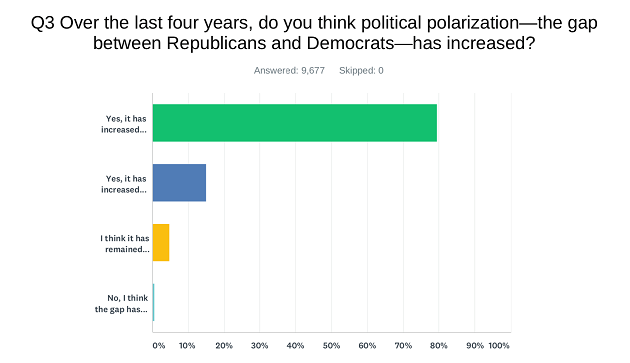 No brainer. That’s because it is.

A few things I’ve seen over the past few days:

Polarization doesn’t even describe what is going on right now.

Moving along, we asked you if America was moving to the right or the left. The consensus is that we’re moving to the left, and it was a pretty broad consensus. I suspect if you spent as much time on Twitter as I do, you’d think that even more. 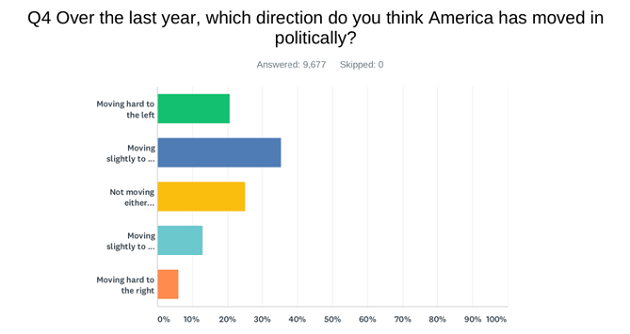 We asked you about debt, and whether you thought it was going to be an issue. Another no-brainer. 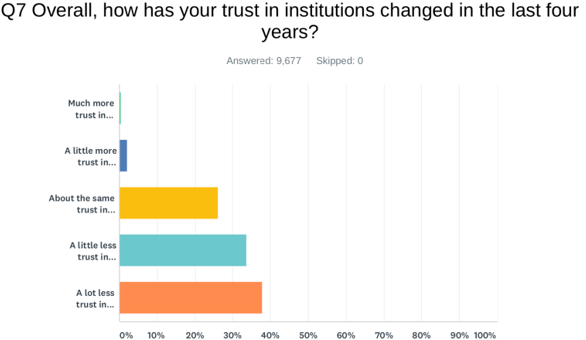 This is what I was talking about in the “Epstein Killed Himself” 10th Man piece. It is the stuff of revolution.

As for the media, overall you think it is much less trustworthy… 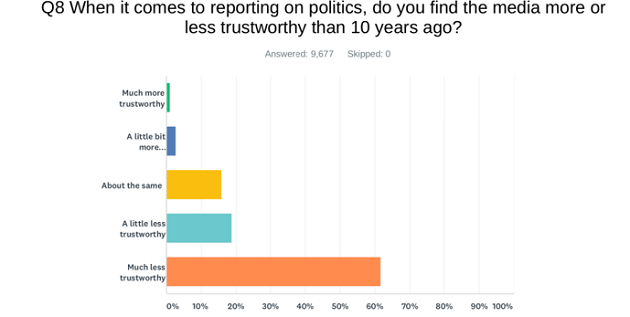 This all paints a pretty terrible picture. Interestingly enough, there was absolutely no agreement on how to play this volatile political environment: 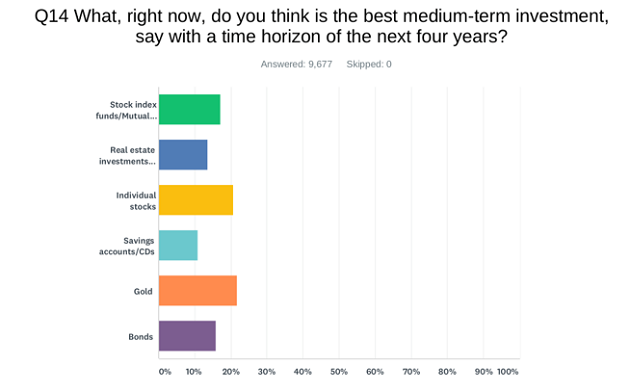 I’m sympathetic to that sentiment. All I’ll say is that I think pessimism is going to come back in style, and probably soon.

Of course, The Daily Dirtnap has been on top of these themes. My subscribers are ready for anything.

We’ll discuss the ramifications of this soon—next week, in fact. For now, enjoy your turkey. I personally like the cranberry sauce that comes in a can, instant mashed potatoes, and store-bought pumpkin pies, but I seem to be in the minority.

I am hip to your asset allocation of 35/55/3/3/4 but somewhere I have missed your recommended allocation to cash and I remember several references to the advantages of holding such an allocation. Could you remind me of your recommended cash allocation? Thoroughly enjoy your analysis. Thanks!

Fascinating that the overwhelming majority of your responders seem to think the nation is moving far or significantly to the left; only 1 in five think it has moved at all to the right, and only 1 in 20 think it is moving hard to the right.  And that many seem to find certain possibilities credible (such that anyone is going to ban cars or tax anyone at 100%).

We aren’t just polarized, we live in entirely separate, and entirely illusory, “realities”.

I think your results are quite interesting. I had a hard time answering the survey, not because I appear to be all that different in my opinion than the other 10K surveyed, but because I’m less certain that the trend is really as current as most think. Let me explain. I think that the collapse of any attempt at objectivity in the media means that we get a constant drumbeat of left-leaning opinion, or perhaps more accurately, propaganda, spewed day and night into our collective consciousness.  I think that because of this it appears that we, as a country, are moving to the left.

However, I don’t think much of the country is moving at all.  Most are becoming hardened in their positions, not moving anywhere. I do agree that the middle is disappearing, but I think that the numbers are probably pretty evenly split moving in both directions away from the center. Overall then, in terms of numbers I don’t think we’re moving anywhere.

I think that it appears that we, as a country, are moving to the left because that is the dominant media voice. I think people, especially Democrats, have forgotten that close to half the country thinks differently than they do. With a single liberal voice, the media reinforces the left’s conclusion that they are righteous in their beliefs and the right’s perception that they are being ignored and shunned. With no one in the media questioning the ridiculous narratives being touted, those on the left are convinced that highly partisan charges are facts. In their minds ‘Russian Collusion’ is an established fact, notwithstanding little, if any, actual evidence. Without some balance in reporting, both sides will conclude that they are righteous in their beliefs and that there is no need for actual and substantial debate to resolve differences.

This is a recipe for civil war. The left’s open rejection of the right of free speech to those who oppose their righteous views, means that there can be no civil debate. As Jordan Peterson says, when debate is no longer possible, only violence remains. The only way to avert disaster is to fight for free speech and honest debate. If the left’s Antifa becomes a model for action, the right will supply it’s own violent response, thus validating Antifa’s thesis. This will escalate into civil war.

I met my first, in the flesh, Antifa activist the other day. I was not surprised to find that she didn’t have much understanding of what a fascist was, only that Trump was essentially “like Hitler”. After that she refused to talk any further. There is no reasoning with minds that have adopted such a simplistic caricature as their world-view and are willing to back it up with acts of violence.

Jared, While the survey results were inline with my expectations (no surprises there), here’s suggested side dish for your Thanksgiving dinner: canned collard greens from Glory Foods—pretty much available all over the South, so likely to be found in Myrtle Beach.  My mother’s generation said the way to cook greens was to boil them for 24 hours, and boil them some more, and then throw them in the garbage.  These are more in line with my grandmother’s generation, who would say, “Boil them until they give up.”