The Federal Reserve is a government institution. Sort of. Technically it is a private bank, and it makes or loses money, but its P&L is incidental to its mission. But for the purpose of this analysis, let’s say that the Fed is a government bank, and that its inhabitants are government employees.

Now, I used to work for the government. And I can tell you from nine years of working for the government that the one thing that motivates government employees more than anything is fear of embarrassment. There’s no profit or loss, but if journalists start sniffing around and news gets out that you were negligent in some way, that’s how careers end. But not because you were negligent—only because word got out!

Among the Fed’s many functions is to serve as some kind of economic oracle. It employs well-educated economists who gather data and make forecasts about the economy. And the best economic minds in the world have determined that the inflation we are experiencing, while uncomfortable, is transitory. It won’t last long. It will simply go away.

But that hasn’t happened. In fact, it is getting worse.

At some point, the Fed is going to have to acknowledge that its forecasts were wrong and that the inflation is not transitory. But it will postpone doing this as long as possible. Because the Fed, as a government institution filled with government employees, does not want to be embarrassed. Admitting it was wrong about inflation would cause it to lose face. And then people would question its oracular abilities.

So, when will the Fed hike rates? It will wait as long as humanly possible.

In my view, the Fed won’t hike rates until inflation becomes a political concern. Until the Biden administration starts looking at the polls and figures out that people are pissed about inflation and might pull the lever for the opposing party.

Now, Joe Biden has no clue how to stop inflation. He has stated that his $3.5 trillion spending plan will actually fight inflation, which is absolutely ludicrous. And his instincts around inflation are bad—he blames high prices on profiteering, and rather than pursuing a supply-side solution, he’ll attack producers for price-gouging, which will have the opposite effect. But I assure you that when inflation reaches double digits—which it will—Biden will phone Powell and ask for help fighting inflation.

One thing I’ve noticed from watching markets every day is that stocks are very squirrelly about the prospect of any Fed tightening. The conventional wisdom around this is that the Fed will taper asset purchases slowly (if it ever gets around to it at all), and then raise rates even more slowly. But if inflation prints 10%, and Biden panics, and the Fed panics, we’re talking about the mother of all crashes in our future. I have been trading accordingly.

Is Biden to blame for inflation? Mostly, but not entirely. Much of the blame rests with the Fed, and also with Trump, who started the PPP loans and stimulus checks. Inflation literally started rising the day that Biden was inaugurated, and people have noticed, so Biden will get the blame. He owns it. And he’ll be wearing it next November.

But I’m not so sure the Republicans know how to stop inflation either.

An observation on social psychology:

Nobody wants to do the hard thing. I was watching the nightly news a few weeks ago, and they were doing a piece on expiring unemployment benefits. It was a sob story. They interviewed a young woman who said she had been looking for a job but couldn’t find one. She had bills to pay, and she was going to starve.

There are more than 10 million job openings! The most ever! 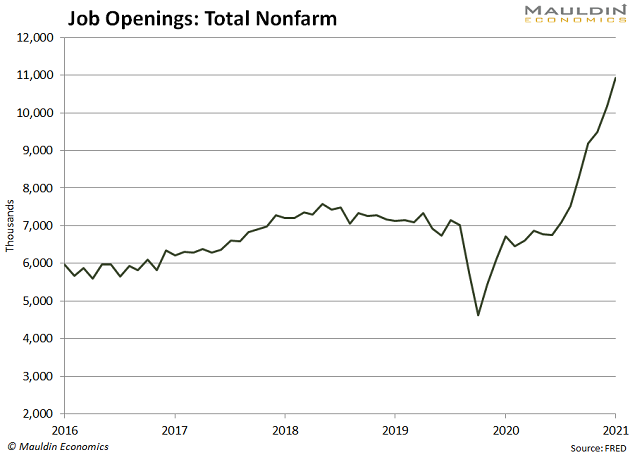 Back in the early 1990s, one of the most incredible things happened—we threw millions of people off of welfare, under a Democratic president. What about the poor people? It’s a little tough love—they need to hustle and go find a job. They will figure it out. And they did.

Politically, that was a very hard thing to do, but it was part of the zeitgeist at the time—the population was very fiscally conservative back then.

At different points in history, a president or Fed Chair had to do the hard thing—the unpopular thing. Paul Volcker did it in 1979, when he was Fed Chair. But again, it wasn’t so much that Volcker was a genius or hero—he was the right man, in the right place, at the right time. But the country demanded it—they were sick of inflation, and they were willing to do the hard thing and take the pain.

Nobody is willing to do the hard thing and take the pain these days. The Fed will hike interest rates someday, the government will do austerity, but not until people are so miserable that they are ready for it. And we are a long way away from that.

In the meantime, the government stupidity will continue, and it will continue to create profitable opportunities. That is the part I choose to focus on—making money. At the end of the day, I am an investor, so that is what matters.

I have something I'd like you to watch if you have time. I sat down with Ed D’Agostino (my friend and publisher here at Mauldin Economics) last week to talk about my daily letter, The Daily Dirtnap. We covered everything from how I got started, to why the letter has helped so many folks, to what I see as the most dominant trend of the next decade (and what to do about it). It just went live this morning. So, catch it if you have a spare 10… click the image below to watch. If you aren't currently following along with me in The Daily Dirtnap, I think you’ll find the conversation valuable. 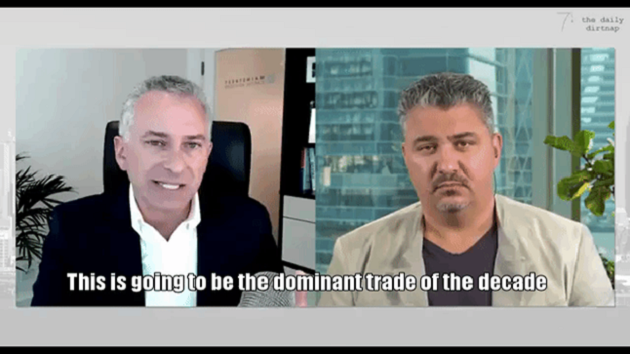