If you’ve spent any time in the grocery store recently, you’ve probably noticed some empty shelves.

This didn’t used to happen. You went to the store, and food was waiting for you. You didn’t have to wait for food.

This is particularly concerning for me, since there are persistent shortages of cat food. I have six cats, and it would be disastrous to run out of cat food. So, I have been cleaning out the store at every opportunity, plus ordering from Amazon and Chewy.

You ever wonder what might happen if the shortages got bad enough that we gradually progressed from mild concern into… panic? Where people believed that we were going to run out of food and went to the store and cleaned it out?

The first rule of panicking is that you should panic before everyone else panics.

We have a hundred cans of soup. Dozens of eggs. A stockpile of meat. Pretty much anything you can imagine that is non-perishable.

Here is a chart of inventories in the UK—I realize that this is the UK, but the same thing is happening here in the US, or even worse. 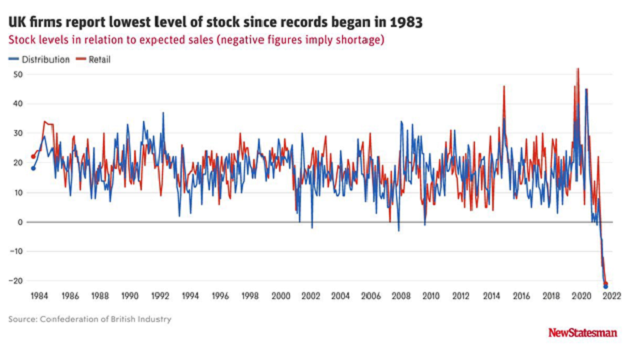 We are experiencing inflation for the first time in quite a long time. And, like I said last week, we are also experiencing scarcity. I am 47 years old—the only time in my life that I recall experiencing this level of scarcity was with gasoline in the 1970s because of the oil embargo. From what I recall, people were plenty grumpy about having to do even/odd days at gas stations and sit in hour-long lines.

Americans are the best people on Earth. But we are not good at rationing scarce resources. It is every man for himself. If I think we are going to run out of cat food, I am not going to leave some in the store for my neighbor. My cats are more important.

It’s simply supply and demand. Supply is shrinking for a variety of reasons, but a big reason is the shrinking labor supply—there simply aren’t enough people to transport it and stock it and put it on the shelves. People are staying home because the government has financially incentivized them to stay home. Even after the extra financial incentives were removed, people decided they liked staying home better.

A free-market economy is generally antifragile—if there is a fire in a meatpacking plant, other meatpacking plants will surge to meet demand. But if there are chronic shortages of raw materials and labor throughout the economy, things break down. And if things really do break down—where the scenario I described comes to pass, and grocery stores are ransacked—the government will respond by rationing scarce resources, which will make it worse.

We are starting to see price increases on some goods—like meat—that have risen to the point where they are starting to equilibrate supply and demand. I spied $27/lb ribeye on my trip to the grocery store. I like steak as much as the next guy, but those types of prices make me think twice. If this keeps up, the political pressure to do something about high food prices will increase, and the government will act in such a way that makes the shortages even worse.

In an inflationary environment, the rational thing for any individual economic actor to do is buy more and buy faster because the price is rapidly increasing. That is what I’m suggesting you do. Or that’s the first thing—next week I’m sitting down with Mauldin Economics publisher Ed D’Agostino to discuss everything we should be doing in this environment. So, keep your eye out for a video of our talk.

Until then, remember that we are not accustomed to stockpiling food because most people have never experienced shortages like this before. There is a possibility that concern will turn into alarm which will turn into panic. And if we’ve learned nothing else from the last year and a half of the pandemic, it’s that mob behavior is very, very scary.

I am no doomsday prepper. I’m not a very paranoid person at all. But I am a trend follower. And I’m seeing that shortages have gotten progressively worse over the last couple of months, and I have zero reason to believe they will get better.

People have been saying for months that this will be transitory. Wrong. Go to Costco, get two carts, and fill them up with as much food as you can. If I’m wrong, you will have a house full of food. Not the worst thing in the world.

Nothing Bad Can Happen

It Was a Good Run