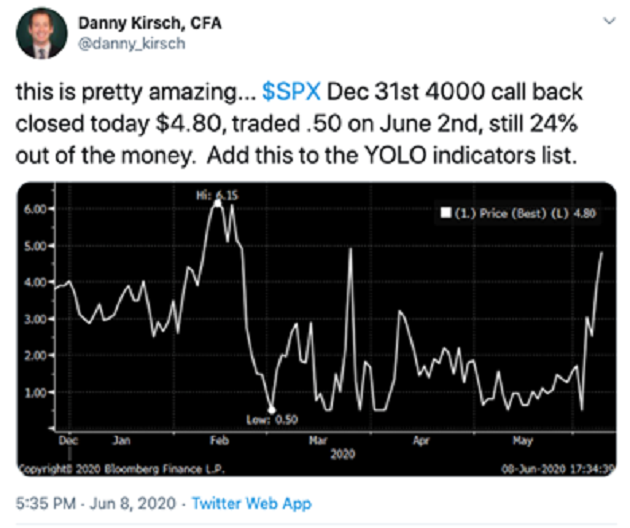 The downside put options are also expensive—the probability that the S&P 500 falls to 2,000 by the end of the year is not zero.

It might be tempting to sell the 4,000 strike call options, and the 2,000 strike put options, which is known as “selling a strangle.” You’re betting that the market will finish somewhere in between.

That is not one of my favorite trades.

As everyone knows, stocks have gone up a lot recently. And volatility has come down, but not all the way down to historical levels. It is still quite high. 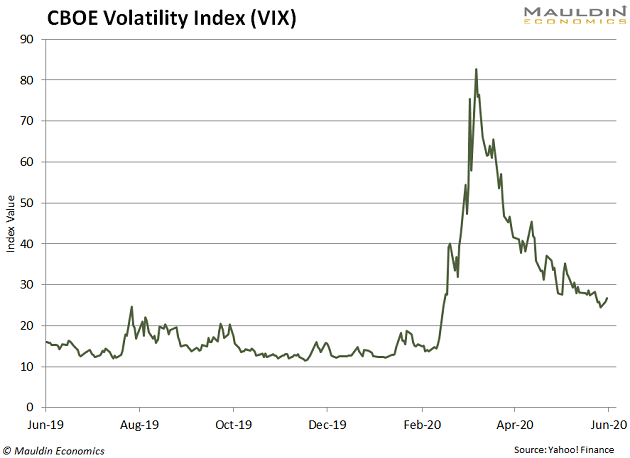 Over the course of my career, I have morphed from a mean reversion trader to a trend follower.

Twenty years ago, former quantitative analyst (and physicist) Emanuel Derman wrote a seminal paper called “Regimes of Volatility” while working at Goldman Sachs. I read it when I was 26 years old, though I didn’t understand all of it then.

We are experiencing financial and social disorder. The two are related.

Sure, stocks have gone up, but that’s not the point—the point is the volatility. And as you know, there’s all kinds of weird stuff happening in the stock market, with day traders bidding up bankrupt companies like Hertz (HTZ) and SPAC electric truck makers.

Things are a bit crazy right now. Would you bet on:

The answer is b. Things will definitely get more crazy.

I spoke to my mom the other day on the phone, who told me that the protests following the death of George Floyd were bigger than what she experienced during the Vietnam War. And those protests are pretty well-known.

People think of the late ‘60s as a time of great social turmoil. This was also right around the time that stock markets peaked: 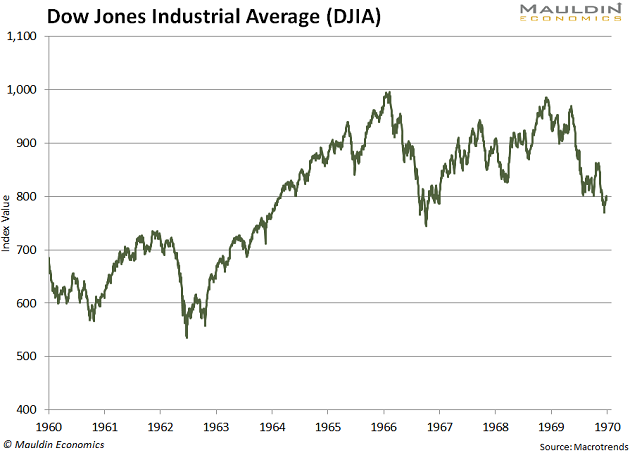 You Don’t Want to “Sell Options”

You don’t want to sell any options.

A lot of people don’t realize there are a lot of ways to sell options that don’t involve actually using options.

I talk a lot about how you should build a portfolio that gains from disorder.

The point is that you want to own optionality, rather than be short it.

In finance circles, this is the conventional wisdom. People pay money for hedges all the time. But hedges are expensive, and people sometimes fall in love with their hedges.

There are countless memes on Facebook and Twitter about how 2020 is the worst year ever. People were even talking about “murder hornets” for a little while.

But I look at it differently—it’s not the worst year ever. 2020 is the most volatile year ever, and people are uncomfortable with volatility. I happen to thrive in volatility. It’s been a pretty great year.

Options were the first thing I learned about in finance, and it shaped my entire view of risk and reward. People who don’t understand options see the world in a very linear way. Options traders understand nonlinearity. They try to gain exposure to it, rather than being exposed to it.

If you can’t handle a second iteration of what happened in March, cash is probably a good place to be.

Hi Jared! It would be great if you put together an Options Masterclass!

The truth about gold and silver? Debt notes are a false system of weights and measures used to grossly distort the US economy from August 15th, 1971 to 2020. We are living a lie, measuring prices in false and illegal debt notes. The real weights and measures system is gold and silver. Gold and silver reveal stocks and wages have fallen 50% from 1966 to 2020 in the REAL world, down from 28 ounces of gold to 14 ounces of gold. We are living a lie using debt notes. We go mad in crowds and come to our senses one at a time. How do we go bankrupt? Slowly at first, then very fast. It is sad what the failed baby boom is doing to their children. May God forgive the baby boomers of their sins.

The article was good mostly because it confirms my belief in options..it can get nerdy and it is not the prime focus of most little guys like me. I have been successful in getting 5 figure returns trading options, yah blind squirrel maybe, but it is powerful and exciting work.
The election..both sides bad..sorry about your depression..it passes.

I don’t understand your “selling options”
When buying bonds or index funds section in the article. Could you please explain and/or recommended a book? Thanks.

Selling options has it’s place.  If you are an active investor, BUY the 2000/4000 strangle you mentioned at the top and sell front month ATM options to take advantage of high volatility. With your longs that deep ITM the risk is minimal and you are guaranteed to collect on one short leg every month.  Roll, rinse and repeat, and consider it one long trade.  If you are a passive investor with a long time horizon, selling OTM puts on down days with high vol is a good way to leg into a position, particularly if you are using 1 lots.