As the 10th Man, of course, I disagree. After all, it is the nature of the markets to punish consensus thinking, and I would say that the idea that deflation will persist and that bond yields will go down forever just might be consensus thinking.

If you read The 10th Man on a regular basis, you know that I’m convinced inflation is coming and that there’s a limitless supply of bonds coming no matter who gets elected.

My Street Freak subscribers will hear much more about inflation from me—including the best ways of profiting from it—because I think this might be one of the biggest macro trends of the next few decades. And it’s going to take most investors completely by surprise… but not us.

If you want to join our happy little family and get in on the inflation trade, we’re making it really easy for you right now, with a special offer just for The 10th Man readers.

Until July 14—one week from now—you can get Street Freak for just $199 per year; that’s $100 off the regular price. Click here to sign up.

By the way, our highly diversified model portfolio is up 12.4% in the last three months and 13.2% year to date… and I’m pretty sure there’s a lot more to come. Even Brexit didn’t hurt us: in June alone, the portfolio was up 6.7%.

Now, let’s move on to today’s 10th Man and talk about one of the most popular inflation hedges…

How High Will Gold Go?

You have to be careful writing about gold. You come out in favor of it and you get maligned as some kind of doomsday-prepping, knuckle-dragging wingnut. Then you never get to go on TV. They don’t invite the crazy gold guys on TV.

Although that raises an interesting question. If something goes down 45%, is it a correction or a bear market?

Anyway, check out this chart of gold in the ‘70s: 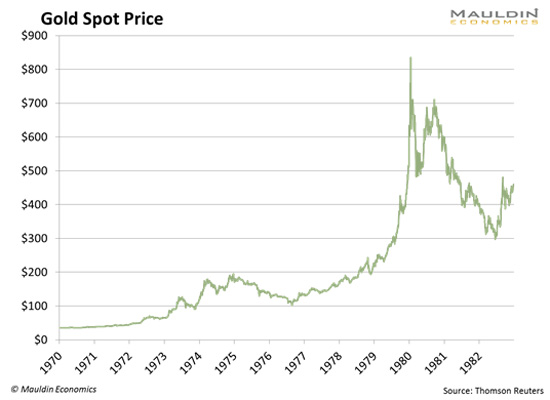 Looking at this chart, you’d say that gold was in a bull market, right? But look closely—during that time period, there was a 50% retracement, from about $200/ounce to $100/ounce.

What am I saying?

You know what I am saying.

Based on technicals alone, if gold follows a similar pattern today, whereas we just had our 50% retracement, it could reach a high of $5,000 to $10,000 an ounce in a few years.

Like I Said—I Will Never Go On TV Again

The fundamental argument for gold is pretty strong these days. The alternative is a bunch of government bonds that yield nothing (or less than nothing) and that will probably never be repaid.

Or stocks, which are currently expensive.

Plus, there are indications that inflation is bottoming/has bottomed. All the stuff we have talked about before.

The US has a 103% debt-to-GDP ratio. It’ll go up a lot under either Trump or Clinton.

There really isn’t any chance that Japan is going to pay you back, or Italy, or even the US, once you take out-of-control entitlements into account.

So what are the options here?

Nobody is going to default here. You want to talk about Financial Armageddon, that would be it.

Greece hasn’t had a lot of luck with extending and pretending. They’re in this sort of endless depression. I doubt anyone would want to copy them.

Nope, everyone is going to inflate, which is the stealth way to default. There has already been open discussion about helicopter money in Japan (essentially the BOJ retiring or canceling outstanding debt).

This is where people just absolutely lose their minds. If I told a six-year-old that we were going to triple the amount of dollars/yen/euros in the system, they would tell you that prices would rise. More money chasing the same amount of goods.

Right now, we are in this fantasyland where governments (including ours) with hopeless fiscal situations are able to basically get paid to issue debt that has zero chance of being repaid in undepreciated currency. Somehow these bonds are considered a “safe haven.”

We have sort of had this détente with the deficit under Obama—the Republican Congress has actually been a pretty effective opposition, and spending as a percentage of GDP has declined significantly since 2010. This is progress. But all of this will come to an end in November.

The only candidate campaigning on a platform of deficit reduction is Gary Johnson. But nobody cares. Everyone cared about the deficit in 1992, when it wasn’t a big deal. Now that we have the highest debt levels since WWII, nobody cares.

Gold cares very deeply about debt. Because once you get the debt up to unsustainable levels, it increases the likelihood that it will be directly monetized. That is all gold cares about.

I deal with a lot of dumb questions about gold: “There is no inflation, why should I care about gold?” We will get inflation eventually—but that is not what gold cares about. Gold cares about you treating your currency like toilet paper.

But you say these sorts of things in public and you’re a crank.

The reality is that gold is a very technical trade. There were lots of reasons to be bullish on gold from 2011–2016, and it went down anyway. Nothing has really changed (except maybe the proliferation of negative interest rates). Japan, Italy, and the US are as insolvent as they ever were.

Except now the chart is making higher highs and higher lows. I don’t care what you think about gold—if you don’t respect the chart now, you are as big of a moron as I was for riding it all the way down.

I’m long in a variety of forms, and I’m staying long until further notice.

So gold is one inflation hedge, but there are many other ways to make money with this macro trend. Over the next few months, I’ll lay them all out in Street Freak—so now is definitely a great time to join if you haven’t already.

You’ll save a hundred bucks on your subscription and have 90 days to play around with it, with full money-back guarantee. So just go and try it, my man; nothing to lose here.