Well, the US doesn’t have that problem. In fact, I think our period of deflation has just ended. And I’m getting my Street Freak subscribers positioned to squeeze the most profit out of this inflationary opportunity.

To get as many people into the fray as possible, the Mauldin team and I decided—for just two short weeks, and this is the second one—to offer The 10th Man readers a special price for the one-year subscription.

Right now, you can prosper along with us for just $199 per year… that’s $100 off the regular price. But hurry, cutoff day is Thursday, July 21. After that, it’s back to the old price.

And after this public service announcement, we go back to the issue at hand…

Shinzo Abe scored a decisive victory in the upper house elections a few nights ago. Let me explain why that is not boring.

Abenomics was conceived in 2012 as a way to combat Japan’s never-ending deflation and pseudo-depression. It included a truly massive program of quantitative easing, which involved the printing of yen to buy all sorts of assets—including stocks!

Abenomics has continued for four years, with mixed results.

Stocks are up about 150%, interest rates are negative, and the yen is appreciably weaker. But there is still no economic growth. 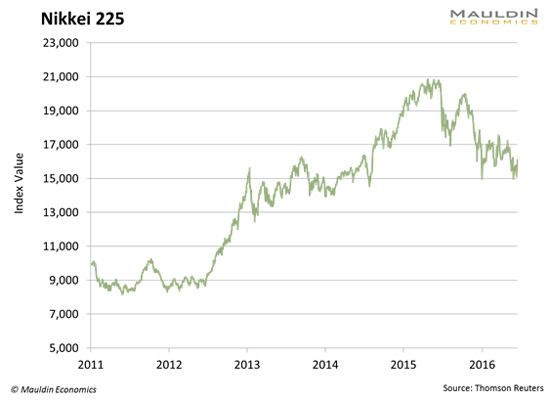 Hence the title of this piece.

So has Abenomics helped?

It might have, if Japanese retail investors owned stocks. But they really don’t—foreign ownership of Japan’s equity market is quite high.

Low interest rates might have sparked off a residential construction boom, but they didn’t—because there is nobody to build houses for. Japan suffers from chronic depopulation, as the birth rate is well below the replacement rate.

The Economics of Depopulation

I say this a lot, but I will say it quite explicitly here: the Earth has experienced explosive population growth for decades, but the rate of growth is slowing, and before long, we will have reached peak population, and the number of people on this planet will actually be declining.

I imagine it will happen faster than people think.

The Malthusians were discredited years ago, but they are really discredited now. What are they going to say when the planet is depopulating?

That may be great for the environment, but the economics of the situation are not so clear. You see, the whole profession of economics was conceived and practiced during periods of rising population. It’s easy to get economic growth when your population is increasing. More people working produce more output.

Let’s review, again, how you get economic growth:

If you have fewer people working, the remaining people have to either work longer, harder, or more efficiently to get the same level of output. Ain’t happening in Japan.

So economics as an academic discipline gets quite weird when the population drops, because declines in output, otherwise known as GDP, become the norm, rather than the recessionary exception.

Japan is basically in recession all the time, except for brief intervals. On a per capita basis, they aren’t necessarily getting poorer—and perhaps that is what people should focus on—but strictly speaking, yes, as long as Japan’s population keeps going down, there is really no way to reverse the deflation.

Enter Abenomics, which has caused the BOJ to print massive amounts of yen and to take all sorts of assets onto its balance sheet. With the trillions of extra yen floating around the banking system, you might think you would get inflation. But not yet—money velocity continues to plummet. So Japan is caught in this vicious cycle of deflation and QE.

Meanwhile, the government debt continues to be effectively monetized (taking the primary dealers out of the equation would accomplish just that).

Someone said on Twitter recently (and I am paraphrasing), “Japan is the biggest hyperinflation risk in the world, and USDJPY is only at 100?”

The One Currency That Could Go to Zero

Remember The Dillian Loop as it applies to Japan:

Right now it’s not really working, so they’re going to do more.

It is possible that the BOJ will print an infinite amount of yen. The helicopter drop is being seriously discussed.

I don’t care what you think of the dollar or the euro or the pound or the Swiss franc—you print an infinite amount of a currency, it is going to decline in value.

I was about to say that it was an easy trade, but it hasn’t been an easy trade over the last 12 months. The yen has rallied massively as the market had serious concerns over the political will in Japan to truly reflate.

But after the election, there should be no doubt about the political will. They are going to reflate. 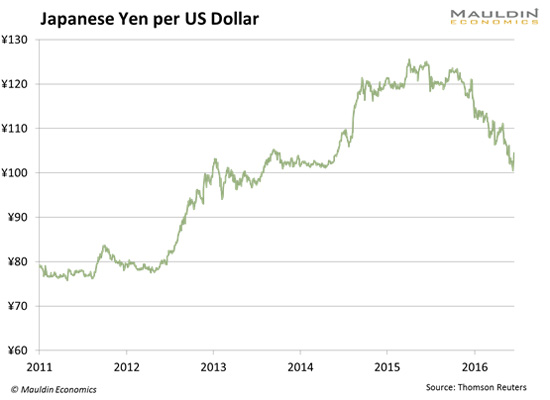 Full disclosure: I am short the yen and I own DXJ, and I have been in those positions since 2012.

If you are a yen bull, you should be very, very nervous about these election results.

Right now, predicting inflation is still an out-of-consensus view. But just about everything we do at Street Freak is out of consensus. It helps you avoid the big drawdowns that herd investing gets you sucked into.

You can read more about my inflation thesis, and other high-conviction trade ideas, at the temporarily discounted rate of $199. You can sign up here—I’d love to have you aboard.

Just thought I’d mention—if you are in the NYC area, you might want to stop by my book signing in the city today, Thursday, July 14. It’s at Millesime, 92 Madison (at 29th Street), at 5pm. I’d love to meet you in person.

I’ll have copies of All the Evil of This World for sale. If you can’t make it, you can do the next best thing—you can watch a video about it here.  If you decide you still want to read it (you might not), you can get one here (warning: it’s not for everyone).

Stuff about Japan is a good reminder of the really bad fundamentals there. Right now, there’s that safe-haven-carry-trade-liquidation panic distracting us.

Don’t agree about inflation in the US, though. Demographics means a shrinking work force in a few years, at least for a while. Strong correlation with future inflation/deflation, less income generated => less demand => deflation. Hard to see where inflation is going to come from, as demographics dictate falling money velocity and interest rates. I suspect opposite: deflation: we haven’t seen for real yet in the US, but we soon will. As for 25 years, Japan has been the pioneer.